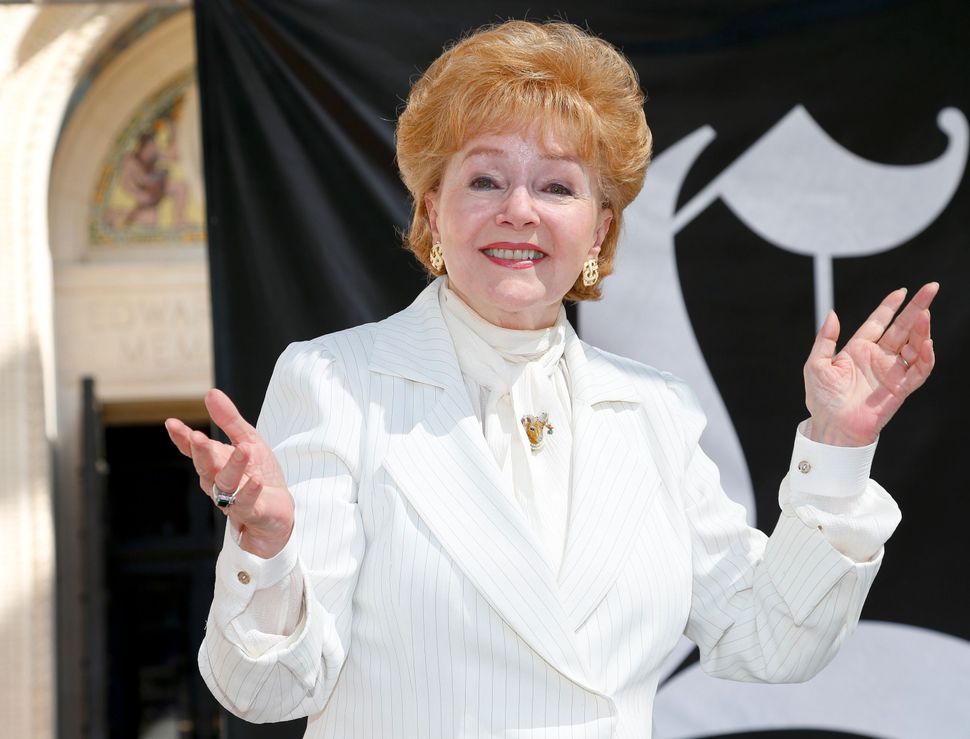 The witty, multitalented performer Debbie Reynolds, who died on December 28 at age 84, surprisingly found herself associated with Judaism both on- and off-screen. From celebrity notoriety as the decidedly non-Jewish spouse of Jewish singer Eddie Fisher, Reynolds survived her marriage’s breakup and went on be cast onscreen as Jewish or crypto-Jewish mothers in later life. TV viewers relished her appearances in the hit comedy “Will & Grace” as Bobbi Adler, Grace’s mother, a frustrated singer and actress who interferes with her children’s personal lives, to the dismay of her husband Martin Adler, played by Alan Arkin. Joyce Antler’s “You Never Call! You Never Write!: A History of the Jewish Mother” classes Bobbi Adler as a “stern-faced, nagging, guilt-tripping caricature” alongside Jewish mothers on such sitcoms as “The Nanny,” “Seinfeld,” and “Suddenly Susan.” Yet unlike these characters, Bobbi Adler as incarnated by Reynolds benefited from the actress’ exuberant glee, charm, and good looks, even when acting out naughtily. A typical line was when Bobbi made a stagy entrance, followed by the confidential announcement: “Look, no panty line because: no panties!” Although Reynolds only appeared in ten episodes of the long-running show from 1999 to 2006, she made a lasting impression.

Even earlier, Reynolds had won hearts in Albert Brooks’ dramatic comedy “Mother” (1996). Although her character, Beatrice Henderson, was not specifically presented as Jewish, her way of asking, “Dear, are you hungry?” as she readied to defrost food for a son who has just dined with her at a restaurant, might strike a familiar chord with some viewers. The Oedipal rivalry between her two sons in the film was another aspect that rang true in this film co-written and directed by Albert Brooks (born Albert Lawrence Einstein), who also stars. Critic Peter Rainer was among many who praised Reynold’s performance, in part because of her serendipitous casting:

“Reynolds appears to be a strange choice to play what at first blush might seem like a Shelley Winters part. But she’s on Brooks’ wavelength. She doesn’t camp up the role or turn it into a Jewish-mother cartoon. Her Beatrice is an original: dazed and confused yet hyperacute about her own needs…[Brooks’s character is] a good Jewish boy beneath the hardheadedness.”

This informed, subtle performance must have seemed improbable decades before. In 1955, when Reynolds married the singer Eddie Fisher, America was agog at the apparent clash of cultures between a pert-nosed, cute blonde singer/dancer from El Paso and the culturally, if not religiously, Jewish scion of a Russian immigrant family. Philip Roth noted in “Portnoy’s Complaint”:

Voyeurism about celebrity intermarriage in 1950s America clearly titillated the masses. Yet Reynolds, always self-possessed and humorous, never wavered in her own identity. By contrast, her onetime rival Elizabeth Taylor converted to Judaism despite the lack of religious observance of the latter’s Jewish husbands Michael Todd and Eddie Fisher. As is well known, Fisher notoriously abandoned Reynolds – they were married from 1955 to 1959 – and their children for short-lived wedlock with Taylor from 1959 to 1964. By separating early from Fisher, Reynolds was able to acquire a perspective on the experience, David E. Kaufman, a Jewish studies professor at Hofstra University, pointed out in “Jewhooing the Sixties: American Celebrity and Jewish Identity.” how during his marriage to Reynolds and earlier, Fisher had been uninvolved with his Jewish heritage. After leaving Reynolds and his children, Fisher informed movie magazine reporters that he had suddenly discovered his roots. This mechaya was supposedly the result of Fisher’s reading Leon Uris’s 1958 novel “Exodus” and befriending Rabbi Max Nussbaum, the Hollywood religious leader who would perform the wedding ceremony for Taylor and Fisher, also presiding over Liz’s conversion.

Witnessing her ex-husband’s belated realization of his roots must have ultimately struck an absurd note in Reynold’s sensibility, as she raised her children. The fact that Fisher showed no interest in Judaism while they were together may have made Reynold’s own approach to Jewish culture all the more celebratory in later years. Her late daughter Carrie Fisher had perhaps the closest identification with Judaism in the family, and Reynolds good-humoredly assimilated a certain amount of everyday Jewish culture. Last year, after Carrie tweeted: “From her perch high above Canters Deli in Hollywood, your half Jewish Princess ponders the world between her bagels,” her mother retweeted the message, adding: “My daughter Carrie is beautiful as she looks down at one of LA’s favorite delis. The whitefish is strong in this one.” Taking Yiddishkeit for granted, as a matter that went without saying, her “Unsinkable: A Memoir” (2013) did not even mention Jewishness. There was no need. Unlike Roth, Portnoy, and a generation of star-struck consumers of film-land gossip, Reynolds did not identify her ex-husband with Judaism, just as he did not so self-identify during their marriage. All in all, given the endless series of trenchant ribbings directed by Reynolds at Fisher in stage shows and on TV, this was probably a good thing. Reynolds’s complex life and career trajectory led from a childhood of abuse in El Paso to her more recent self-appointed role as West Coast whitefish maven. A lady of laughter and many performing skills, she will be much missed.