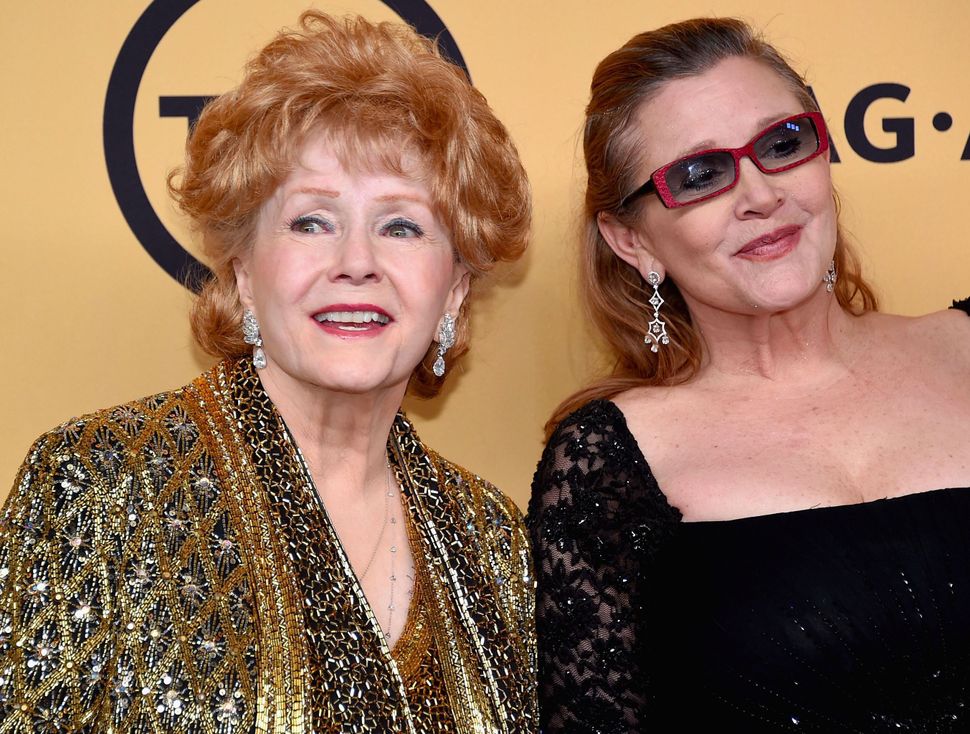 By now, most of us have seen that phenomenal, heartbreaking photograph of a young Carrie Fisher watching her mother, Debbie Reynolds perform at the the Riviera Hotel in Las Vegas in 1963. In the photo Fisher, aged six, sits in the foreground on a stool backstage –- a tiny gray cherub directing our gaze towards the illuminated on-stage figure, Reynolds, with her arms outstretched.

This. Just this devastatingly moving photograph. Just this. pic.twitter.com/PKTT7gPbBI

We cannot see the audience, but Fisher fills their role. Just as she directs our gaze, she also guides our emotional response. Transfixed, in awe, we see Reynolds through her daughter’s eyes, that is, on a different, brighter plane (and indeed, the back-stage, on-stage divide is a divide between two separate worlds). From the vantage point of the present, the image also gives us a view of history as it played out –- Fisher watching her mother in the wings, waiting to one day take the stage as well.

On December 29, The New York Times’ Jonah Engel Bromwich gave us the history of the photograph. The picture was taken by (in)famous photographer Lawrence Schiller, who, by the time he would take this photograph at 26 years old, had already captured those legendary pictures of Marilyn Monroe naked by a pool.

In the article, Bromwich writes that Schiller said that Fisher “seemed content to sit and stare at her mother for hours.”

“[Fisher] was really mesmerized by her mother always,” Schiller told Bromwich. “That’s what really stood out.”

In a 1995 piece about Schiller’s collaboration with O.J. Simpson, Bob Sipchen of the Los Angeles Times explored Schiller’s strange and fascinating past. Among other insights, he mentioned that Schiller was mercilessly bullied as a child for being Jewish, that he is blind in one eye because of an accident involving an umbrella and a dumbwaiter, and that he had a, shall we say, idiosyncratic sense of journalistic ethics. (For instance, “In 1969,” Sipchen writes, “he used a legal connection to obtain interviews with incarcerated Manson family member Susan Atkins. Schiller sold the interviews’ contents, undermining Atkins’ credibility as a witness.”)

This dedication from Norman Mailer’s book “Marilyn,” on which he collaborated with Schiller, seems to sum the man up nicely: “To Larry, a true collaborator, genius, kid brother, maniac, monologuist, (expletive) and general factotum, cheers.”