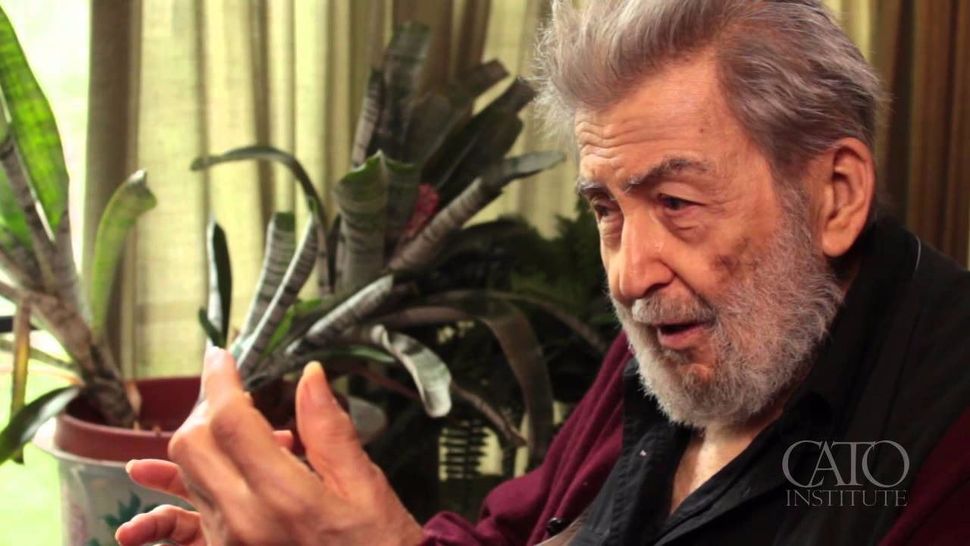 Reading Nat Hentoff in the 1970s in the Village Voice and elsewhere, as I did, helped clue me into an essential truth: that a writer needn’t specialize in one area to the exclusion of all else. In Hentoff’s case – which was particularly inspiring to me as a budding music critic who was also obsessed with politics — he filed reviews about jazz even as he chronicled the battles in the ever-present war on the First Amendment of the U.S. Constitution in his widely syndicated weekly column.

Hentoff, who died on Saturday, January 7, at age 91, was born and raised in Boston, the son of Lena (née Katzenberg) and Simon Hentoff, Jewish immigrants from Russia. He recalled his youth in the heavily Jewish part of Roxbury at a time when Boston, he said, was one of the most anti-Semitic cities in the country. He would often describe getting attacked in the streets for being a “Christ-killer.” He attended the prestigious Boston Latin School before going on to study at Northeastern University and Harvard University, followed by a stint as a Fulbright fellow at the Sorbonne in Paris.

An ardent civil libertarian, Hentoff described himself as “a member of the Proud and Ancient Order of Stiff-Necked Jewish Atheists.” After a lifetime of supporting and identifying with liberal causes, his almost fundamentalist viewpoint on the Constitution, particularly the First Amendment, found him adopting strange bedfellows when he joined the libertarian, Koch Brothers-founded Cato Institute as a senior fellow and regularly contributing to the right-wing website WorldNetDaily.com. He was also a vocal opponent of abortion and an early supporter of Rand Paul’s 2016 candidacy for president.

Hentoff began his career as a jazz DJ and critic, writing for Down Beat magazine, founding the Jazz Review, and eventually finding his home base at the Village Voice and the New Yorker. He became close friends with figures including Duke Ellington (he called him his “mentor”), Billie Holiday, Louis Armstrong, and Dizzy Gillespie, as well as with black activists including Malcolm X and Eldridge Cleaver. He was a buddy of Lenny Bruce and testified as a defense witness at Bruce’s trial on obscenity charges. He wrote dozens of books on jazz, politics, and the Constitution. He was named a Jazz Master by the National Endowment of the Arts Jazz Initiative in 2004, the first non-musician to receive the honor.

While Hentoff’s musical interests were mostly confined to jazz, he had a soft spot for Bob Dylan. He was an early champion of the folksinger (born Robert Allen Zimmerman) from Hibbing, Minn., writing the liner notes to “The Freewheelin’ Bob Dylan” in 1963; profiling him in the New Yorker in 1964; and working with him on the notorious Playboy interview of 1966 (in which Hentoff basically played straight-man to Dylan’s surrealistic, stream-of-consciousness improvisations).

Hentoff heard a Jewish element in Dylan’s music years before anyone else. Writing about Dylan’s 1976 album “Desire,” Hentoff described it as “klezmer music,” using a descriptor that hadn’t even yet been coined in the Jewish music world, somehow anticipating the revival of the Old World sounds of the violin and Hebrew cantillation that would serve as the bedrock for the music’s revival, which properly dates to Andy Statman’s 1979 album with the awkward but foundational title, “Jewish Klezmer Music.” Writing about the Rolling Thunder Revue, Dylan’s 1976 concert tour, for Rolling Stone, he referred to Dylan four times as a “klezmer,” aptly describing him as a “Jewish hobo musician with roots — roots by the centuries….”

A fiercely idiosyncratic character, Hentoff’s absolutist beliefs found him supporting the right of American Nazis to march through downtown Skokie, Ill. – a town heavily populated by Jewish Holocaust survivors – in 1977. Hentoff was also a vocal critic of Israel.

Proudly heretical, one of Hentoff’s favorite stories from his youth was how at age 12, on Yom Kippur, he sat on his doorstep publicly eating a salami sandwich as people walked by him on their way to synagogue. He said later that he did it in order to know how it felt to be an outcast, calling the experience “enjoyable.”

It was this identification with outsiderdom and this desire, or perhaps a visceral need, to provoke, that made Hentoff such an alluring role model for several generations of cultural critics who likewise refused to be bound by artificial constraints of genre and ideology.