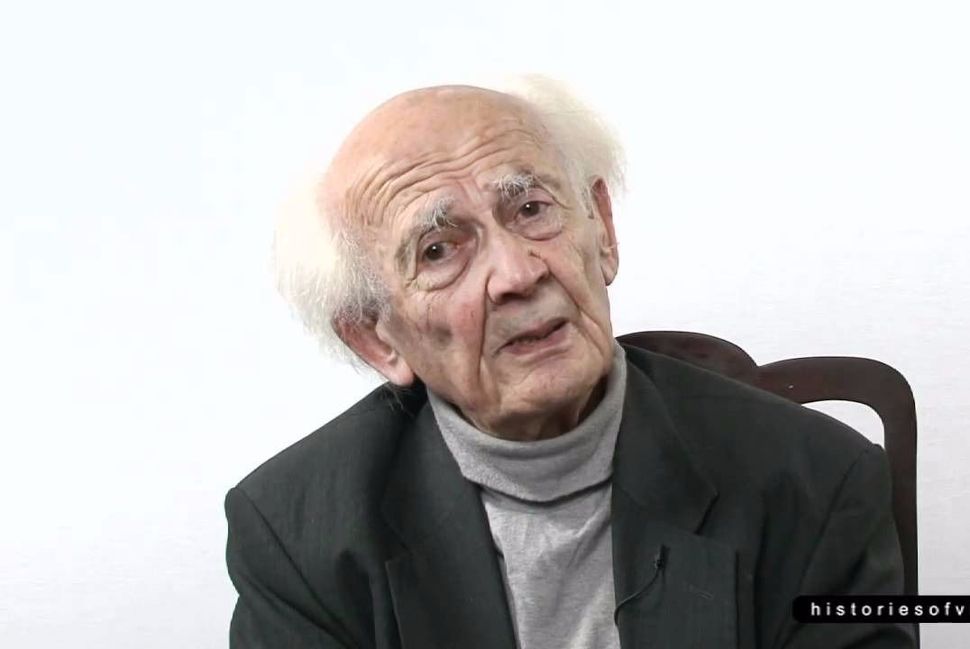 Polish-born Jewish sociologist Zygmunt Bauman has died in his home in England at age 91, the Washington Post reported today.

Bauman lived in England since 1971 after he was driven out of Poland by a purge engineered by the communist Polish secret police. Professor Emeritus of Sociology at the University of Leeds, Bauman was one of the world’s most revered social theorists, publishing 57 books and well over a hundred articles. Most of these address common themes: modernity and postmodernity, consumerism, morality, and the sociology and political culture of fear.

Bauman is known for coining the term “liquid modernity” to describe the unstable and ever-changing nature of post-modern life, as well as many neologisms such as the “precariat” (the mass of people living precarious existences) and “allosemitism” (the ambivalent attitude towards Jews in many modern societies which cannot be summed up as either philo- or anti-Semitism).

Bauman was born to assimilated Polish Jewish parents in Poznań, Poland, in 1925. When Germany invaded in 1939, his family escaped to the Soviet Union. Bauman served in the Soviet-controlled Polish First Army and in May 1945 was awarded the Military Cross of Valour. Baumann was a committed communist during and after the War (he later saw him himself as a revisionist Marxist critical of mainstream communism), and volunteered to serve in the intelligence corps, a move he later said was “a mistake” though he told the Guardian he had a boring desk job and never informed on anyone.

In 1968 most remaining Communist Jews were driven out of the country as a result of a purge led by Mieczysław Moczar, the Chief of the Polish Communist Secret Police. This included many Polish Jewish intellectuals, among them Bauman, who had lost his chair at the University of Warsaw. Bauman went to Israel to teach at Tel Aviv University before accepting a chair in sociology at the University of Leeds.

In his early writings, Bauman largely wrote on issues of class and social conflict, before shifting to a focus on modernity, bureaucracy, rationality and social exclusion in the 1990s. In the era of Trump, his insights seem more relevant than ever.

Bauman viewed modernity as a project where individuals surrender freedoms in exchange for security. Modernity, in what he came to call its “solid” form, involved removing unknowns and uncertainties through bureaucratic order and the proliferation of categories and theories, whether scientific or pseudo-scientific. The achievement of control, security and order is doomed to fail, however, due to the impossibility of imposing such order on life. This is particularly volatile when it comes to the impossibility of controlling and ordering minorities and foreigners — those outside of one’s social group.

Bauman’s most famous book, “Modernity and the Holocaust,” argues that the Holocaust should be seen as deeply connected to modernity and its order-making efforts. In Bauman’s analysis, the Jews became ‘strangers’ par excellence; the Final Solution was an extreme example of the attempt to attain security by eliminating the undigestable and threatening “other.” Bauman contended that the same processes of attempted exclusion and elimination are happening today.

In the last two decades of his life Bauman came to focus on the metaphor of “liquidity” to describe post-modern society, arguing that key elements of our lives such as evil and love have become “liquid,” unstable and undefinable, producing a pervasive and dangerous sense of anxiety which can lead to moral indifference, irrationality and violence. His 2016 book “Strangers At Our Door” is an analysis of the European refugee crisis, which Bauman saw as emblematic of many of the key ethical and political issues of our time.

Together Bauman’s key ideas offer a harrowing picture of unstable, liquid societies haunted by fear and uncertainty, unable to form lasting bonds of love within or to welcome the stranger from without.

In November Bauman said in an interview with L’Espresso that he feared that the election of Trump harks to a new era where these anxieties bring about a shift from post-WW2 inclusivism to a new “exclusivism,” the era of “expulsion.”

Bauman was a lifelong critic of Zionism, particularly focusing on Israeli government behavior towards Palestinians. This was a reflection of his lifelong concern with exclusion of the other and the treatment of “the stranger.” In 2011 he gave a controversial interview to the Polish weekly “Politika” where he castigated Israel over its building of the separation wall, comparing it to the walls of the Warsaw Ghetto.