Broadway Cast of ‘God Of Vengeance’ Arrested on Obscenity Charges 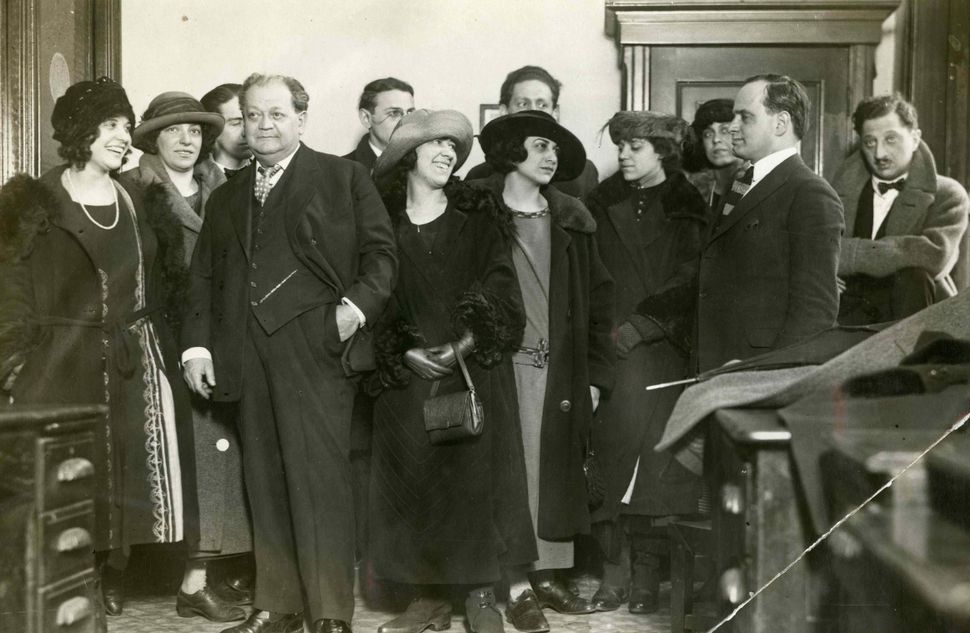 The Cast of ‘God of Vengeance’ Image by Forward Association

Editor’s Note; The following article about the arrest of the cast of “God of Vengeance” on obscenity charges has been translated from the Yiddish by Chana Pollack from the March 7, 1923 edition of the Forverts.

Responding to allegations yesterday that Sholem Asch’s drama “God Of Vengeance,” currently presented in English at the Apollo Theatre, is immoral, a grand jury released an official complaint against the actors and actresses performing in the drama as well as the theatre’s manager and owner.

In all, 16 individuals received complaints for performing “God Of Vengeance,” including acclaimed actor Rudolph Schildkraut, in the lead role, lawyer Harry Weinberger, the play’s manager, and one of the Selwyn brothers, owners of the Apollo Theatre.

Since the Sholem Asch drama began being performed in English, those dedicated to “defending morality” are in agreement that the play is immoral and have sought means to suppress it. Finally, they were able to convince the District Attorney’s office to investigate and file official complaints against the actors and actresses, as well as the management.

At 10:30 they must all appear before District Attorney O’Neil in his office, where it’s expected that warrants will be issued immediately to the accused, demanding they then appear before Judge Crane at the General Sessions Court.

The play’s manager, Mr. Weinberger, himself a well known lawyer, is certain he’ll win this fight against the religious fanatics on behalf of Sholem Asch’s drama. He believes “God of Vengeance” is not only not immoral, but that the play is an outstanding work of art. He referred to the opinion of leading opera singer Mary Garden, who stated that “God of Vengeance” is the most moral play on Broadway. As evidence that Asch’s drama is a work of art, the lawyer Weinberger offers the foreword that Ab Cahan, Editor of the Forverts wrote for the English edition of the work, available at the play’s performances at the Apollo Theater.

Broadway Cast of ‘God Of Vengeance’ Arrested on Obscenity Charges