What Netflix’s ‘Bojack Horseman’ Tells Us About Assimilation 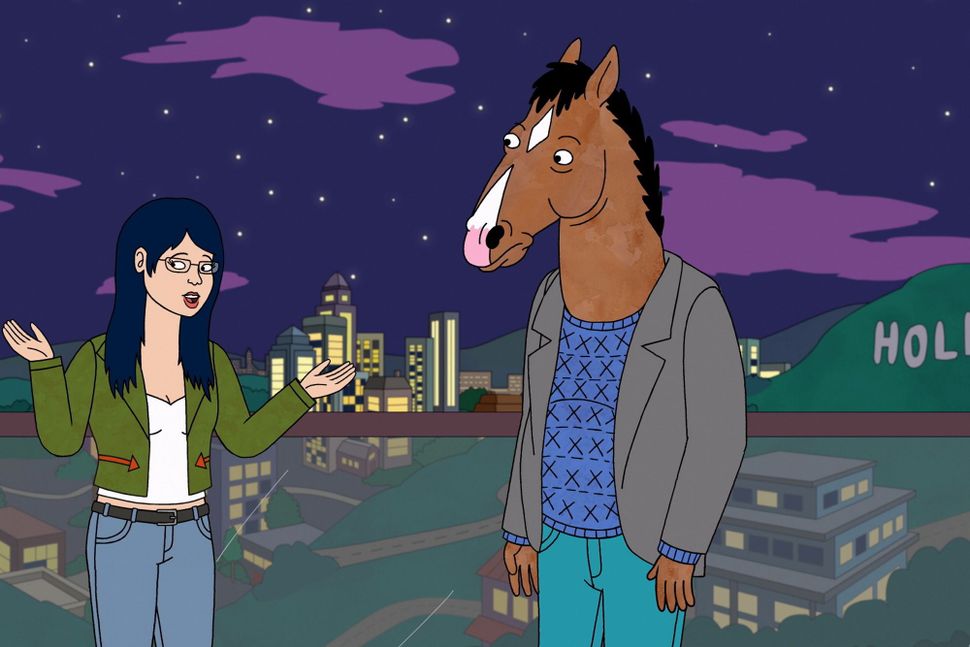 ‘BoJack Horseman,’ Netflix’s animated comedy featuring an anthropomorphic celebrity horse, is about the American crisis of authenticity. BoJack (voiced by Will Arnett) is a washed-up sitcom actor who lives in a dystopian Hollywood where Wolf Blitzer reports on supermarket scuffles and a resurrected J.D. Salinger is a game show writer.

The protagonist wonders what he is behind the awards and tabloid antics, the money and the Twitter rants — what his essence is as opposed to his existence. Neither BoJack nor anyone around him understands how to harmonize their existential, external selves with their essential, internal selves; they don’t even know whether such essential selves even exist. The program uses the experience of its Jewish characters to comment subtly on how we should approach an existentialist crisis.

The show’s creator, Raphael Bob-Waksberg, whose mother runs a Jewish bookstore and whose father helped Jews emigrate from the Soviet Union, uses the situation of American Jewry to explore the program’s central themes of assimilation and conformity. In using alienated and displaced Jewish characters who must come to terms with their identities, “BoJack” isn’t breaking new ground. But in a time when we are all celebrities in our own little social media circles, the questions it addresses are more urgent than ever.

In the world of “BoJack,” producer Lenny Turteltaub (voiced by J.K. Simmons) represents one extreme of the spectrum. He’s a stereotype — an older, cigar-chomping, gold chain-wearing New Yorker who keeps an eye fixed on the bottom line. But he projects a sense of performance. When BoJack asks him if he’s really Jewish, Lenny hems and haws with the help of some clearly fabricated “Yiddish” words. He’s adhering to an identity, even if it’s a somewhat ersatz one, but it is defined by people watching him. Is he a Jew when people aren’t watching him?

Talent agent Rutabaga Rabbitowitz (voiced by Ben Schwartz) represents the other extreme. His horrific pun of a name is unambiguous about his background, but he is entirely undifferentiated from the other characters along any axes of religion or ethnicity. He’s just another young, cultured, successful urban American professional who takes his wife to the opera in the evening and schemes about moving up the corporate ladder during the day — in short, he is assimilated to his cultural matrix. Unsurprisingly, his personal life is a morass of uncertainty. He waffles about leaving his wife for his coworker and BoJack’s agent, Princess Caroline (a cat voiced by Amy Sedaris). He tries to start an independent agency, but he won’t commit to it financially. He’s a rabbit who doesn’t know what he wants because he doesn’t know who or what he is.

Princess Caroline herself sits somewhere between the two extremes of full differentiation or full assimilation. She goes to family bar mitzvahs, but doesn’t seem to go to synagogue regularly or make much of her familial affiliation. Yet in some way she is more at home with herself in the universe than either Turteltaub or Rabbitowitz. Her goals aren’t necessarily always worthy — in fact, they are frequently mercenary and self-absorbed — but she knows what they are and how to achieve them. If nothing else, her personality is essential, secure in itself.

Of course, none of these approaches completely addresses the problem at hand. There’s no glib solution to the modern shedding of existential and essential realities at the social or personal level. Nevertheless, there are more productive and less productive ways of approaching circumstances. The Jewish cultural tradition offers different approaches to the problem. “BoJack Horseman,” for all its goofiness, recognizes these approaches, takes them seriously, and makes them an integral part of the series’ examination of postmodern life.

Jude Russo is a freelance critic based in Maryland.

What Netflix’s ‘Bojack Horseman’ Tells Us About Assimilation