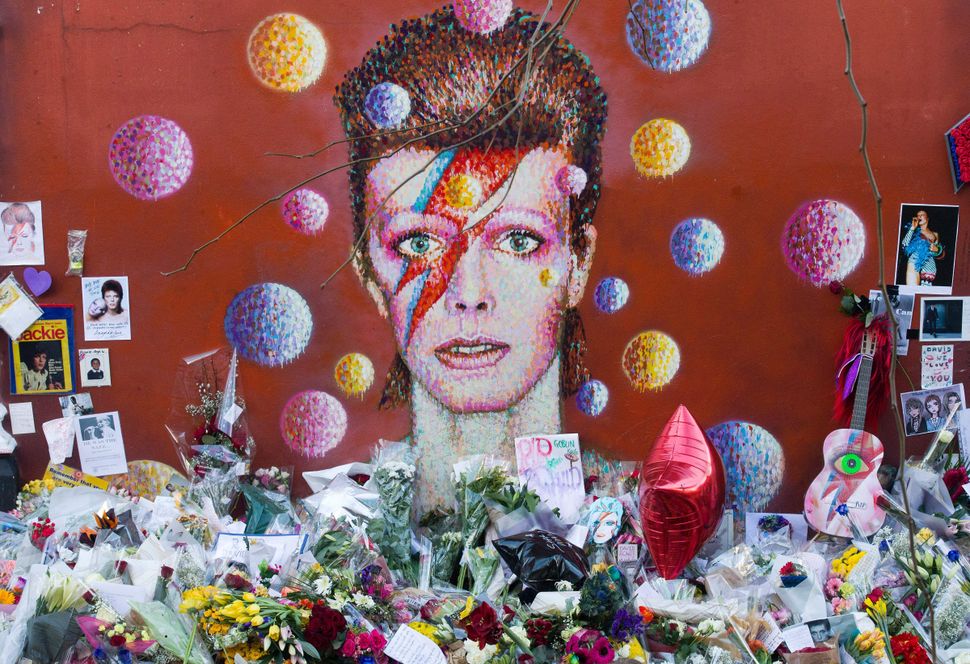 According to an essay written by Pulitzer Prize-winning novelist and screenwriter Michael Cunningham (“The Hours”), the David Bowie musical “Lazarus” was initially conceived as a show about the great Jewish-American poet, Emma Lazarus, who is best known for her sonnet, “The New Colossus,” whose lines appear inscribed on a bronze plaque in the pedestal of the Statue of Liberty.

Writing in GQ magazine Cunningham reveals that Bowie called him out of the blue a decade ago to talk over his idea of a stage musical about a marooned alien, based upon the character he played in the Nicolas Roeg film, “The Man Who Fell to Earth.” The story, which would take place in the future, would revolve around the discovery of a cache of previously unknown songs by Jewish-American rock poet Bob Dylan. (The story would take place after Dylan’s death – keneynehore.) Bowie himself would write the fake Dylan songs. And finally, Bowie, obsessed with popular artists who hadn’t received their due as serious artists, wanted a role for the underappreciated poet Emma Lazarus, whose words are some of the most famous in the world but whose work is not taught in universities.

Cunningham and Bowie spent three months working on the musical, which Bowie also wanted to include a mariachi band. Then Bowie suffered heart trouble, needed surgery and rest, and the project was quietly shelved. Communication between Cunningham and Bowie petered out. It wasn’t until years later that Cunningham saw a poster for an upcoming production of “Lazarus” at a downtown New York theater that he learned that Bowie had gone ahead with the project working with another writer. The Dylan subplot, the mariachi band, and any overt mention of Emma Lazarus were gone; only the alien remained.

And the name “Lazarus.”

In the end, the title song of the musical “Lazarus” seems to be neither about Emma Lazarus nor Lazarus of Bethany. The song also appeared in a version on Bowie’s final album, “Blackstar”; it was the first single off the album and the subject of a gorgeous, haunting music video. As much as the song seems to hint at Bowie’s terminal condition – he died just two days after “Blackstar” was released (a year ago yesterday, January 10, 2016) – the song feels familiar, like one of Bowie’s many meditations on the trials and tribulations of fame. It opens with the lines: “Look up here, I’m in heaven / I’ve got scars that can’t be seen / I’ve got drama can’t be stolen / Everybody knows me now.”

There is still, however, a hint of the song’s conceptual origins. Bowie sings, “By the time I got to New York, I was living like a king,” which contrasts starkly with Emma Lazarus’s “Give me your tired, your poor, / Your huddled masses yearning to breathe free.” Bowie also echoes that last phrase when he sings, “This way or no way / You know, I’ll be free.”