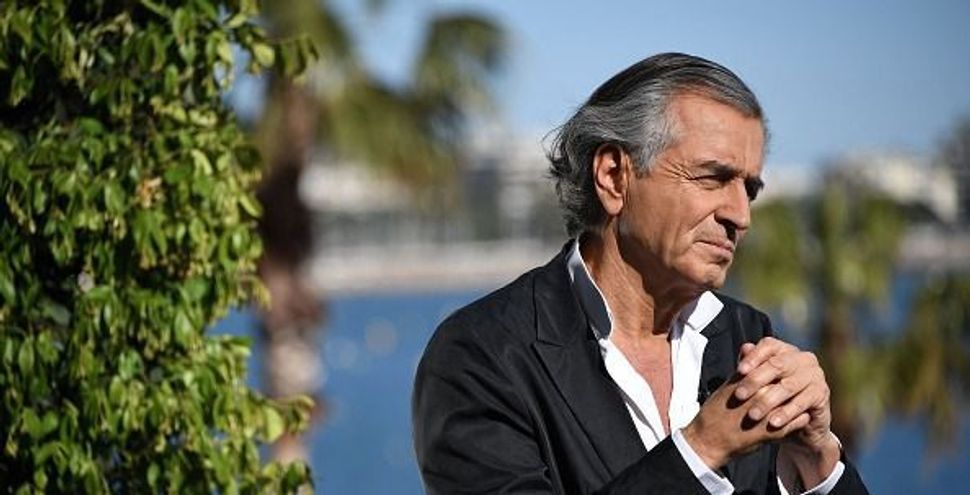 One of Bernard-Henri Lévy’s earliest works, 1979’s “The Testament of God,” argued that Jewish tradition holds an answer to the challenges of what he had earlier termed “barbarism with a human face.”

“The Testament of God” was one of the books that propelled Lévy to become one of France’s leading public intellectuals. Now, thirty-five years later, he returns to the subject of Judaism with “The Genius of Judaism” (published in French last year as “L’esprit du judaïsme,” or “The Spirit of Judaism”). Released in January with the subject of anti-Semitism on the left and right very much on everyone’s mind, it purports to offer a fresh vision and understanding of what it means to be a Jew.

In the lull between the publicity for the French and English editions of the book, Lévy and I met, and our political conversation was dominated by questions of security and the pros and cons of the burqini.

“I’m not in favor of banning it,” Lévy said to me, reclined in his signature dark suit atop a crisp white shirt, several buttons undone, on a gray couch. He argued that the vision of world the burqini represents has to be intellectually weakened. “The burqini is part of a great political battle. I believe a world where women are free is better than a world where they are slaves. I believe that we who love democracy, we have to plead it as much as possible, especially in countries where inequality between genders is the law. It shocks me to see these burqinis. It shocks me.”

We were speaking in the office of his Parisian apartment, dominated floor to ceiling by white- and cream-spined tomes. On his desk sat an old black ThinkPad laptop and photographs of his wife, the actress Arielle Dombasle.

Part of the argument of “The Genius of Judaism” is that Judaism entails an obligation to the other, to the dispossessed and forgotten, one that arguably has spurred Lévy’s interest in the wars in Bosnia, Darfur, Libya and today, the struggle against ISIS in Syria and Iraq. This battle is the subject of his latest documentary movie, “Peshmerga.” Something of a cri de coeur, it follows the front line, south to north, of the struggle between the Kurds and their Western allies and ISIS in Iraq. Lévy says the film arose out of a desire to be a witness to this particular battle against Islamic fundamentalism and terrorism.

Beginning with no pre-conceived idea or plan, Lévy came away with certain conclusions or discoveries, not only about the war but the Kurdish people in general. In terms of the conflict, Lévy witnessed the important role Western airstrikes play in support of the Kurdish forces on the ground. “Like the jaws of freedom,” he said. He also observed that the soldiers of ISIS have a tendency to “avoid the fight. They retreat without combatting. They are afraid of real soldiers they have in front of them” on the battlefield.

“This is one of the lessons of this movie,” he continued, that “the scenario, the chain of events is always the same: the peshmerga advance, they are ready to find and fight a strong resistance, and there is none. ISIS is not able to sustain the assault of the peshmerga.” Still, the resistance to ISIS from the peshmerga has a major difficulty. If, as the old Marxist expression has it, the emancipation of the working classes must be conquered by the working classes themselves, the peshmerga does not believe it is well suited to the liberation of towns and cities currently controlled by ISIS beyond its natural domain.

“I am an internationalist, so in the world as I wish it, it should not matter who is liberating. But I know the area. I know the rules. And I know that it does not work like this, alas. If the Kurds did it alone, it would not work because they would be sooner or later perceived as foreigners, liberating a city which is not theirs.”

One of the more intriguing threads running through “Peshmerga” is the relationship between Jews and Kurds, a historic bond that Lévy observed had a contemporary resonance. “I was more or less aware but it struck me. I knew the Kurds helped to free some Jews from Iraq and Iran — I knew all that. But this assumption, this acceptance, this will to inhabit this brotherhood of destinies, I did not know it to such an extent.” The last Yom HaShoah, Lévy told me, was commemorated in Erbil, the Iraqi Kurdish capital, in the presence of high-ranking military commanders and government officials. “There are not so many other Muslim countries — Morocco of course, or Bosnia-Herzegovina or Kosovo — where you have this presence of the genocide of the Jews in the collective memory”

The movie, as Lévy sees it, is his contribution to the struggle against ISIS. “It’s a world fight. It concerns all of us. It’s my way to contribute. They are lonely, they are ill-armed, and so I wanted to contribute to their effort. So when you start from their point of view of how to contribute to their effort, what can you do? You can fight yourself. I cannot do that and it’s not my way. You can raise money, which I don’t know how to do. Or, you can be a witness by word, by image, and better, by the combination of the two. This is what I did.”

The motivation behind “Peshmerga,” above all, would appear to be Lévy’s clarity that the war against ISIS in Syria and Iraq is of immediate and imminent importance. He bemoans the isolationism or ignorance present in the West today. “This is a world danger, it is an enemy for all of us: Kurds, Americans, the Middle East, Europe. We are all of us in the same boat. We have to share the cost of that, and also the human cost, the risk. The risk should be shared. I advocate for a change of mood and vision because the war in Syria, the war in Iraq has precise, strong effects in our countries and the sooner ISIS is defeated, the best for all of us.”

Indeed, being in Iraq only seemed to crystallize Lévy’s disappointment in the West’s decision to refrain from intervening at critical moments in the conflict, including August 2013, when Bashar al-Assad crossed President Obama’s so-called red line on the use of chemical weapons. “When the Obama legacy will be sketched out, this will be the dark point: the acceptance of the worst in Syria,” he said. “Our generation will bear a terrible responsibility. For me, what is happening in Syria is an absolute shame. I will live with that all my life.”

Back on the home front, Lévy told me towards the end of our conversation that were he to run, he would vote for the incumbent, François Hollande, in this year’s presidential election. Lévy continues to believe he is a great world leader. “On the most important topics”—including Syria and Iraq, where Lévy’s attentions are turned today—“he has behaved bravely.” (On December 1, Hollande announced he would not seek re-election.)

At the time, I was a little surprised that Lévy would support so unequivocally the least popular president in the history of the Fifth Republic, but on reflection, I’ve come to see the sense in it. Lévy is very much of France and part of the French national conversation but the particulars of French domestic policy has never really been his subject or concern. His work has principally been about the corruption of the international left by totalitarian ideas on the one hand, and on the other, war, genocide, forgotten peoples, and the role of the West and France in particular in international conflict zones.

With that in mind, Hollande, who inserted the French military into Mali and the Central African Republic and was left alone in support of armed intervention in Syria, is, or in this case was, the perfect candidate for Lévy. For, Hollande was a man of the left who understood the necessity of military intervention for humanitarian ends. Aside perhaps from the disliked Prime Minister Manuel Valls, candidates of this mold are few and far between now, as France increasingly turns in on itself. To whom Lévy will turn now is anybody’s guess.

Liam Hoare is a freelance journalist based in the UK