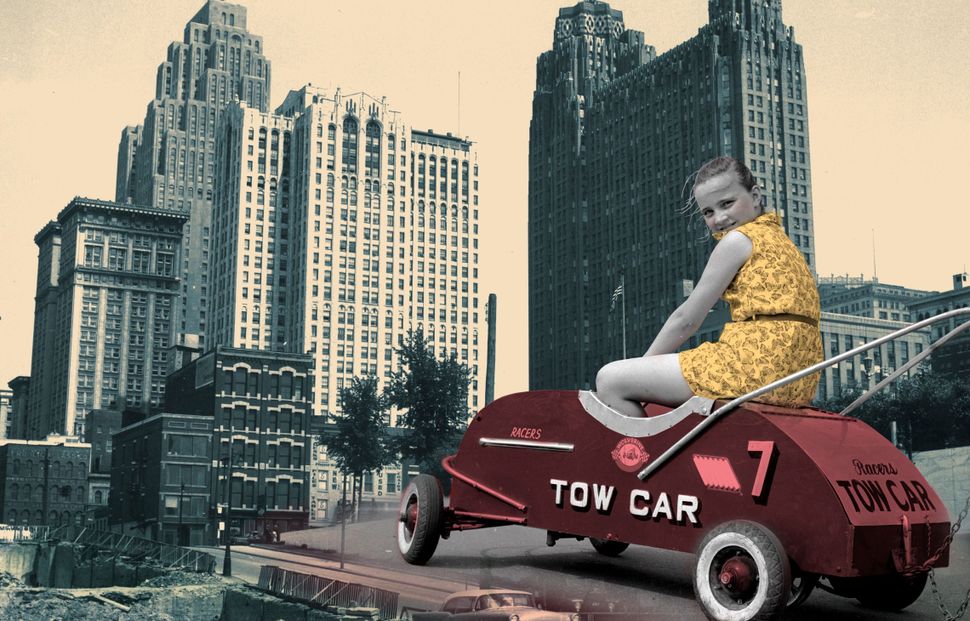 You know that you’re a Proud Detroit Jew, because for decades you boasted about growing up less than a mile away from the house of Smokey Robinson. Maybe you never saw him “Shop Around,” but you could point out his house on Outer Drive.

You still brag about the fact that you saw little Michael Jackson perform with the Jackson 5 at the Michigan State Fair way before the world knew his great solo talents. And you loved your brother, who was selling metro passbooks at the fair, for securing an autograph from David Ruffin, inscribed, “Maybe someday you will be my girl,”

Although you lost this precious autograph that you used to keep in your wallet, you have written in your will that “My Girl” will be sung at your funeral.

Your feet danced, and you cried tears of nostalgia when you watched “Motown, the Musical” on Broadway with the daughter of your dear high school friend Kathleen, who went with you to hear Martha Reeves and the Vandellas at the Fox Theatre. You recall how Reeves shouted to the audience, “How many of you had a man that did you wrong?” Amid the cheers of approval, she yelled back, “And where did you hear about it — through the grapevine?”

You know you are a proud Detroit Jew, because you were exposed to great masterpieces of art walking around the Detroit Institute of Arts. You viewed Pieter Breughel’s uncensored “The Wedding Dance,” in which there were dancing men with erections who were cleaned up in your college art history books, and you reveled in Diego Rivera’s murals.

You know you are a Detroit Jew because you ask for a pop when you order a Diet Coke, and because you affectionately called your father “Pops.” You miss drinking Vernors, va va voom, which made you belch even more than your father’s favorite seltzer (which he affectionately called “2 cents plain”). And you remember fondly the delicious taste of Sanders’s rich chocolate sauce.

You lived in Sherwood Forest, where there was no Robin Hood and mostly Jews. Your neighbors learned to call one another MOTs, members of the tribe. You went to the nearby Jewish community center, which was full of interesting activities, and this was the type of JCC you helped to create in your adult years when you lived elsewhere. Instead of attending the neighborhood high school, Mumford, heavily populated by Jewish students, you got your education attending the citywide Cass Tech.

You know you are a Detroit Jew, because you once attended a Sholem Aleichem school, where the director was the son of a famous Yiddishist. Your attempt at Hebrew school did not pan out, nor did learning Hebrew from your linguist father. He sprinkled his vocabulary with so many Yiddish words that you grew up swearing fluently in it. Each year, your Litvak-born father took you and your brother to see “Fiddler on the Roof” at the Shubert Theatre to instill identity about the old country.

You channeled your mother’s Polish roots by going on Sundays to eat kielbasa and pierogies at Martins in Hamtramck. Or your family ate regularly at Darby’s on 7 Mile and Wyoming for fancier deli food. And you recall how, after hearing on the late-night news that Darby’s was on fire, you followed your mother as she threw her coat over her nightgown to watch and to mourn this Jewish restaurant going up in flames. And when you heard about Ivan Boesky getting in trouble over insider trading you recalled the Detroit delis named Boesky’s.

You know you are a Detroit Jew, because you religiously watched the popular kiddie show host Soupy Sales, aka Milton Supman, and laughed at his antics. You still chuckle decades later, remembering how his sidekick, White Fang, handed a glass of water to Sales — who accepted it with the hand attached to the arm sporting a watch; then, White Fang asked him what time it was, resulting in a very damp finale. When your divorced mother went out with Sales, you fantasized that he might become your stepfather.

You know you are a Detroit Jew because your family used to go down to Greektown for delicious food and to see a bellydancing show. Or on a boat touring Belle Isle. You summered at a cottage by Cooley Lake decades before it became the suburbs where Jews and other whites fled to from Detroit proper.

You might not know one car from another, but you did grow up recognizing the voice of a family friend, Rube Weiss, as he announced on the radio, “Sunday at Detroit dragway,” or seeing Weiss play a very believable Santa Claus waving in the Hudson Thanksgiving Parade. Nowadays, as Hudson’s department store has been torn down and the Macy’s parade dominates the airwaves, you take pride in knowing that a Jew played Santa Claus.

You know you are a Detroit Jew, because your family made an early exodus to live in the suburbs, in Al Taubman’s first housing tract. When this Jewish builder later became the head of Sotheby’s, you remembered his construction roots.

You remember hearing fellow classmate Karen Parker disinvite you for a play date because “Jews killed Christ.” And when your family would go for Dairy Queen, you’d hear your Yiddish-speaking father yell out, “You anti-Semite” every time the family passed the Shrine of the Little Flower, on Woodward Avenue, since The Rev. Charles Coughlin preached there.

You know you are a Detroit Jew because your father would take you and your brother to Kol Nidre services year after year, while telling you how slugger Hank Greenberg went to the synagogue instead of the stadium in 1938 on our holiest day. You heard the story so often, you grew up thinking Greenberg was part of the Kol Nidre service — so you spent 13 years making a film on the Hall of Famer.

You know you are a Detroit Jew, because you understood that Grosse Pointe was not the neighborhood to move into. And when your brother attended a prep school there, proudly wearing a mezuza around his neck, he was heckled for being Jewish while warming the bench during basketball season.

You know you grew up in Detroit when you first visited Manhattan and found yourself straining your neck because you never saw buildings so tall. And you could not quite comprehend the strong New York accents, especially among fellow Jews. They sounded different, except for those who had European accents like your mother’s.

Your family did not belong to a synagogue, so you attended services at the Downtown synagogue and as an adult you adjusted easily to a havurah, a Jewish fellowship. You do sadly remember how a deranged parishioner killed the revered rabbi Morris Adler at Shaarey Zedek in 1966.

You know you are a proud Detroit Jew when you hear that the University of Michigan, which you and your family members attended and continue to attend, won on a Saturday in the fall, even though you didn’t watch the game. And you are amazed at what a good education you received with your family paying about $500 a semester.

You still feel guilty for having been part of the white flight that not only left Detroit, but also the state. You circulate among your fellow exiled Motor City family members and friends every article that appears about the dying Detroit coming back. You feel a little less guilty when you have an epiphany in watching “Motown the Musical” that Berry Gordy also left Detroit and moved Motown to Hollywood.

Still, though, years after you left Detroit, you know you’re a proud Detroit Jew because when you want to show people where you grew up, you still put up your right hand and point to Detroit at the stem of your thumb.

Aviva Kempner is a documentary filmmaker. Her most recent film is ‘Rosenwald.’