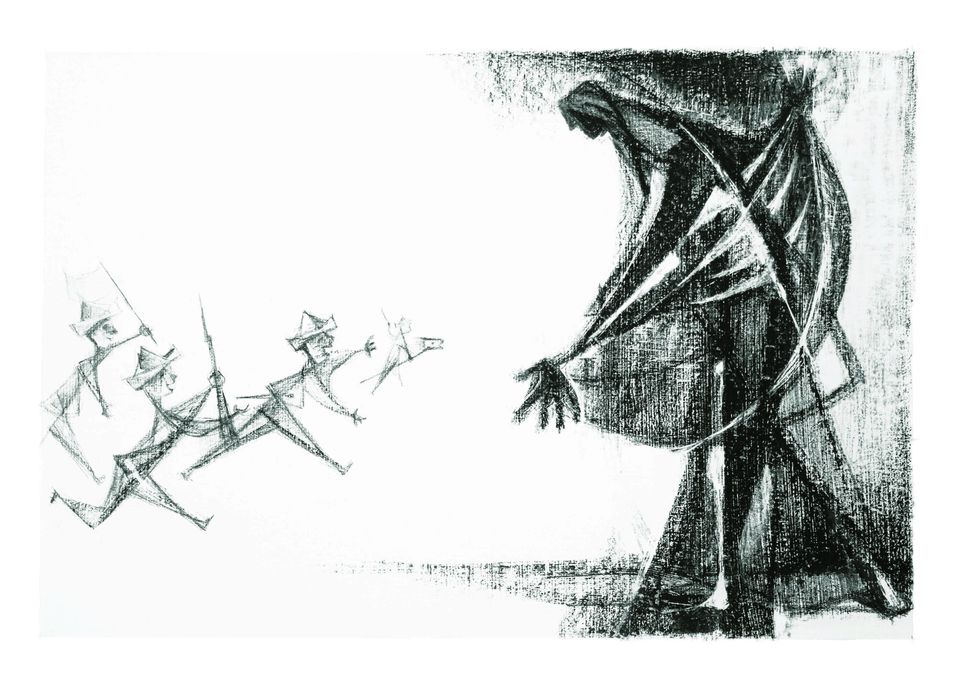 It turns out that even cultural icons like taking pictures with their personal heroes, which is why when I visited Art Spiegelman at his Manhattan studio one damp morning early in January, the two of us spent 10 minutes trying to find the folder on his computer containing his last photographs with Si Lewen.

In the photos, Spiegelman, wearing a canvas hat, beams with boyish pride. In his studio, which is madcap in exactly the way fans might hope — books floor to ceiling, framed comic strips on the wall, color bursting from every corner — the comics artist, sporting a tweed jacket, button-down vest and crisp silver goatee, came off as thoughtful, genial and well aware of his stature in his chosen medium. Drinking wine with Lewen from plastic cups just days before the older man’s death, at 97, Spiegelman looked like a schoolchild on an exciting field trip.

Lewen, who died on July 25, 2016, enjoyed a rarely profitable career as a painter before renouncing the commercialization of art in 1985. (He continued to paint every day.) Still, the astonishingly prolific artist is unknown to many. Spiegelman hopes Lewen is about to regain some attention.

Spiegelman and Lewen had begun corresponding in January, 2013 and met that same year when Spiegelman was working on a project called “Wordless!” — a performance that introduced audiences to narratives told in pictures. While researching his project, Spiegelman learned about Lewen and got in touch with the artist. They became close friends, as well as collaborators, from 2013 until Lewen’s death.

The day of the wine and canvas hat, Spiegelman had driven to see the artist in Gwynedd, Pennsylvania, bearing the first printed version of his newest project, “Si Lewen’s Parade: An Artist’s Odyssey.” 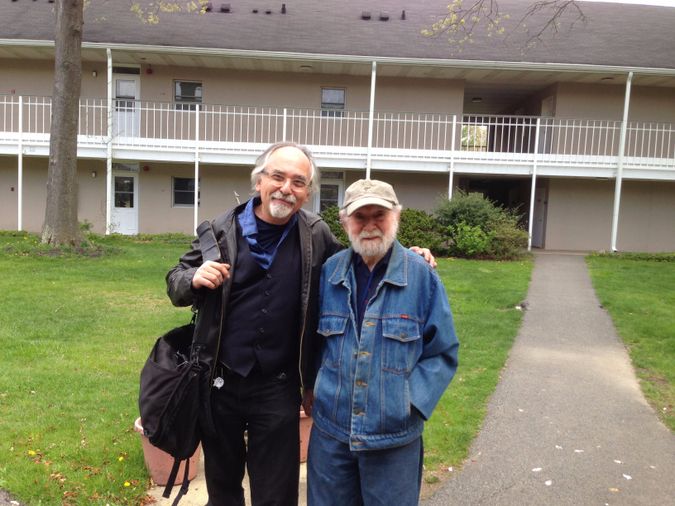 The book — if it can be called that — is part biography and part printed retrospective of Lewen’s career. It centers on a complete reprinting of the artist’s wordless, hand-drawn narrative “The Parade.”

As fans of Spiegelman’s pioneering work “Maus” won’t find surprising, “Si Lewen’s Parade: An Artist’s Odyssey” pairs text and image in a new medium: Its two covers are unexpectedly unbound, sandwiching an accordion of pages between them. The first time I pulled my copy out of its box, it dropped to the floor —“like a slinky that went out of control,” Spiegelman said with a grin. Rooted in Lewen’s experience helping liberate the Buchenwald concentration camp — a camp in which he might well have ended up, had he not had the teenage prescience to insist his family leave Germany after Hitler’s initial rise to power — “The Parade” tells the story of a world descending inevitably into war.

The narrative’s first panel, deceptively cheerful, shows four children striding eagerly forward under a bright sun. In the next, gaping observers lean out of windows to watch something below — a parade? — that, on the third panel, reveals itself to be a stream of faceless, shadowed adults moving forward at a violent speed.

Troops assemble, propaganda flies. More smiling children, playing at war, run into the arms of the grim reaper; they leave his embrace as marching soldiers. A mother carrying a child is impaled on a wave of bayonets; severed heads hang from a clothesline against a background of parading soldiers; animals flee; an armless woman is pushed, in a wheelbarrow, through a crowd of emaciated sufferers. Victory is declared, and a mother embraces a young child, shielding it from the sight of the celebrating hoards. That’s the sequence’s last human image, but it’s more damning than hopeful. The mother and child might embody some unquenchable warmth and grace, but they do so in an inescapably tainted world that is moving, already and inexorably, toward yet another war.

In Spiegelman’s studio in SoHo — a building he ruefully complained now hosts a Tiffany’s, “the last stop for gentrification before it just hits mummification” — intimations of that brutal, dehumanizing cycle felt, disconcertingly, simultaneously distant and close. It was a warm room, after all, crowded with works of artistic and literary greatness. Hard to believe that there, with the art, and the Tiffany’s downstairs, the parade of Lewen’s imagination could ever sweep through.

And yet, as with many interactions of the moment, political uncertainty — and the sense that, in the United States, many are living with a fear that’s newly intimate — exerted a pull on the conversation. Spiegelman mentioned that Lewen, who “would brag about being to the left of Karl Marx,” surprised him during the last election cycle. Spiegelmen assumed Lewen would, in the Democratic Primary, support Bernie Sanders; Lewen was, in fact, for Hillary Clinton.

“No, no, no, Art, you don’t understand,” Spiegelman said, imitating Lewen’s soft Eastern European accent with a smile. “If we don’t have a matriarchy, we won’t exist in the future.”

I asked if he was, in a perverse way, grateful that Lewen never lived to see the at least momentary defeat of that particular American dream.

“‘Art, I’m very disappointed,’ is I think what he would have said,” Spiegelman said. “But I think, as somebody who lived through the 20th century, if he hadn’t been able to get used to disappointment he’d never have made it to 60.”

For those unfamiliar with Lewen, it’s easy to read that statement as dismissive of the real consequences of war, hatred and political suppression. It’s not.

For Lewen, disappointment with humanity was the long-term consequence of visceral, physical harm. As an 18-year-old refugee new to the United States, the artist was brutally beaten robbed and called anti-Semitic names by a New York City policeman in Central Park. The incident, Spiegelman writes in his introduction to “An Artist’s Odyssey,” drove Lewen to attempt suicide; he was unable to tell his wife, Rennie Lewen, about it until they’d been married for more than four decades.

And, of course, there was Buchenwald. Lewen arrived there as one of the Ritchie Boys, a group of native German speakers employed by the United States Army, as Spiegelman writes, “in translation, espionage, and psychological warfare.” Lewen operated a sound truck, attempting to persuade German soldiers to surrender. In the role, he was often stuck in crossfire.

In an excerpt from Lewen’s unpublished memoir that Spiegelman includes in his introduction, Lewen writes that after seeing Buchenwald’s crematorium, he checked into a medical station, “urinating and vomiting blood.”

And yet he returned from the war to his canvases, and was, to his own surprise, drawn to color and light. That period didn’t last — when it faded, he came to the work of “The Parade” — but for the rest of his artistic career, Lewen oscillated between subjects of anguish and those of wonder.

What was perhaps most impressive for Spiegelman was Lewen’s commitment to art. “I would say probably his most lasting achievement is turning his back on the art world. That took as much courage as being on the front lines of Normandy and shouting into a loudspeaker, ‘Drop your weapons and surrender,’” Spiegelman said.

“It was as necessary for him, and as brave, to say well, f—k it, these galleries can’t tell me to paint more pretty pictures,” he said.

There was something about that dedication that spoke to Spiegelman in a way that surpassed the professional.

His own father, whose life Spiegelman so memorably chronicled in “Maus,” passed away in 1982. In their short period of acquaintance, Spiegelman said, he’d come to see Lewen as something of a father figure — well, “more like a crazy uncle.”

Still, “I think near the end I was calling him on Father’s Day, since I didn’t have anyone else to call,” he said.

All in all, there was a wistfulness to Spiegelman, an easy-to-miss undercurrent to the bright encyclopedic rush of his words. While we spoke, his two phones — a landline and a cell — rang multiple times. He checked them with some anxiety. After we spoke, he planned to drive upstate to Binghamton to visit a dying friend, and he wanted to make sure he caught any updates on that friend’s condition.

In a matter of months, first Lewen’s loss, now this looming one. Not that a father defines a whole life, and not that loss does, either, but the search for a missing figure wears. And so does the knowledge that that figure, once found — at least in resemblance — will, inevitably, once more disappear.

It’s a parade of a different sort, less horrifying than Lewen’s but similarly inevitable.

But something else the two men shared, perhaps, was the idea that a third kind of parade is possible: not one of rage or of the unstoppable progression of life and loss, but a gleeful one of creation.

Spiegelman spoke with palpable excitement of Lewen’s most ambitious creations, born of his youthful desire — the one that prompted him to become an artist — for the paintings he saw on early trips to the museum to talk to each other. Around 1960, Lewen started a series called “Procession,” a sequence of canvases that grew and grew until it included more than 1,800 panels. He then started a second such series, “Centipede,” which became “Millipede” and, while never completed, eventually stretched over 3,000 feet.

“I’d say that talking to pictures and telling them to sit closer together so they could talk to each other is a very important insight and offers great promise for what the world can offer,” Spiegelman said.

Yet the enormity of Lewen’s projects, and the extent to which he wished to stretch that conversation, is partially responsible for his exclusion from the canon. Spiegelman has tried to get Lewen’s work into galleries and has encountered some excitement, but it’s always been stymied by the immense number of Lewen’s works.

“When I said how many paintings he had, her face turned white,” Spiegelman said of one initially interested gallery owner.

The men’s shared frustration with the art world — its commercialism, its limits, its dictates of style — was a frustration of vision as well as industry.

After all, frames in a story of images speaking to each other, possibly endlessly, like pages in the story of a life? It’s enough to make you wish for God. Not to imagine the possibility of a proper, final ending, nor that of boundless opportunity to create, but rather a chance to believe in a gallery big enough for all the paintings to crowd together, all the unfinished stories stringing together in a different, ever-shifting, never-predictable chain.

“To do all this while keeping his integrity intact, keeping a political vision without becoming a strident political artist, to be able to follow his muse toward abstraction or representation, depending on his moods, is the most open way — the most inspiring way — that I can think of to continue as an artist into my own senility,” Spiegelman said.

Talya Zax is the Forward’s culture fellow. Contact her at zax@forward.com