What Does Trump’s Choice of Bibles Tell Us About Him? 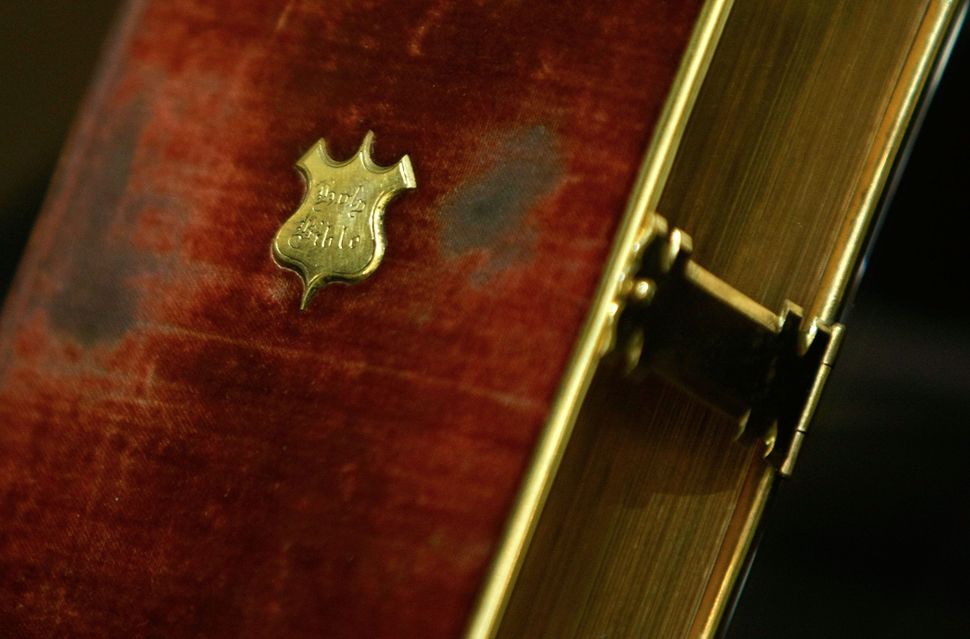 President-elect Donald Trump has announced that he will be sworn in using both Lincoln’s Bible and his own family Bible, given to him by his mother. The Constitution doesn’t require that a Bible be used at all.

The Bible aspect of the inauguration is all about symbolism, not law. Barack Obama chose Lincoln’s Bible for his first inaugural and both Lincoln’s Bible and Martin Luther King’s Bible, for his second inaugural — a clear nod to the history of civil rights in America. This time, the idea of a President who rose to power by invoking racism and sexism, and above all, exploiting lies and hatred, using Lincoln’s Bible has an entirely different connotation.

Maybe the real story here is not about reminding viewers of Lincoln, but alluding to Obama. It’s fascinating to think about how much Trump has copied Obama’s moves — while questioning his birth certificate, or in other words, his right to be President. Trump positioned himself as the “change” candidate, just as Obama did; Trump’s wife Melania’s Republican convention speech included passages plagiarized from Michelle Obama’s speech; and now, Trump is following Obama’s lead on, of all things, Bible choice.

On Friday, Trump plans to keep the Bible closed and not recite a verse — and as usual, avoid specifics at all costs. But interestingly, when it comes to the Bible and the inauguration, Obama also chose not to quote a verse. Reading articles from late 2008, you can hear the expectation journalists had that Obama, known for his eloquence and his interest in literature, would select a Bible verse to highlight the moment’s symbolism; one CNN headline read: “Obama picks Bible for inauguration, but what verse?”

Instead, Obama used a Thomas Paine quote that George Washington ordered read to his troops when things looked grim for the colonists: “Let it be told to the future world … that in the depth of winter, when nothing but hope and virtue could survive … that the city and the country, alarmed at one common danger, came forth to meet (it.)”.

What’s interesting about Obama quoting Washington, and not the Bible, is that Washington was the first to quote the Bible at an inaugural. Washington opened to a random page and got Genesis 49:13 — “Zebulun shall dwell at the haven of the sea; and he shall be for a haven of ships; and his border shall be unto Zidon,” in the King James translation.

By not quoting a Bible verse, Obama was breaking new ground — at least for recent Presidents. After all, Bill Clinton quoted Isaiah 58:12: “Thou shalt raise up the foundations of many generations, and thou shalt be called the repairer of the breach.” Richard Nixon also went with Isaiah — choosing Isaiah 2:4: “And he shall judge among the nations, and shall rebuke many people: and they shall beat their swords into plowshares, and their spears into pruninghooks: Nation shall not lift up sword against nation, neither shall they learn war anymore.”

In the lead-up to an inaugural, the mention of a verse can also offer an early window into a new President’s thinking. The caption from a famous 1933 AP photograph reads: “President-elect Franklin D. Roosevelt looks at a familiar chapter from Paul’s first epistle to the Corinthians, in the family’s Old Dutch Bible, at his home in Hyde Park, NY, Feb. 27, 1933. He’ll place his hand on the passage when he takes the oath of office on Inauguration Day, March 4, 1933. The Bible has been in the possession of the family since 1670.”

Perhaps there are no “familiar chapters” for Trump, who confused “Second Corinthians” and “Two Corinthians” while speaking at a Christian university. As usual, voters are expected to applaud a closed book — and in this case, one closed book piled on another closed book. It’s an apt metaphor for a President who has made it clear that he believes “looking the part” is what matters most.

The “look” we will see — the two-Bible thing — is exactly what Obama did in 2013. The big difference in Trump’s rendition is, of course, the absence of the Martin Luther King Bible.

What most of us will see at the inauguration is, simply, what the cover of Lincoln’s Bible looks like these days, a sort of “Antiques Road Show.” And since the exact historical period alluded to in the vague slogan “Make America Great Again” was never specified, “great” may in fact refer back to a time after Lincoln but before King, which happens to fit in well with 1955, or the date Trump received the Bible from his mother.

That gift was given nine years before the Voting Rights Act, which was gutted in recent years, while a President who invoked Lincoln — and whose symbolism as the first African-American president moved many — sat in the White House. The ability to vote is law, not symbolism, and it is up to us in the challenging years ahead to watch for the difference. It will be up to us to insist on specifics, and to always open the book, even if a large hand tries to keep it closed.

The Jewish community has a long history of reading closely, and paying attention to seemingly tiny points that reveal a world. That tradition is rooted in the Torah itself. This reading tradition is good training for what we face now. In the years ahead, we’ll need to insist on details; we’ll need to demand the verse every time, and not simply accept a hand on two closed books, piled on top of each other, revealing nothing.

What Does Trump’s Choice of Bibles Tell Us About Him?