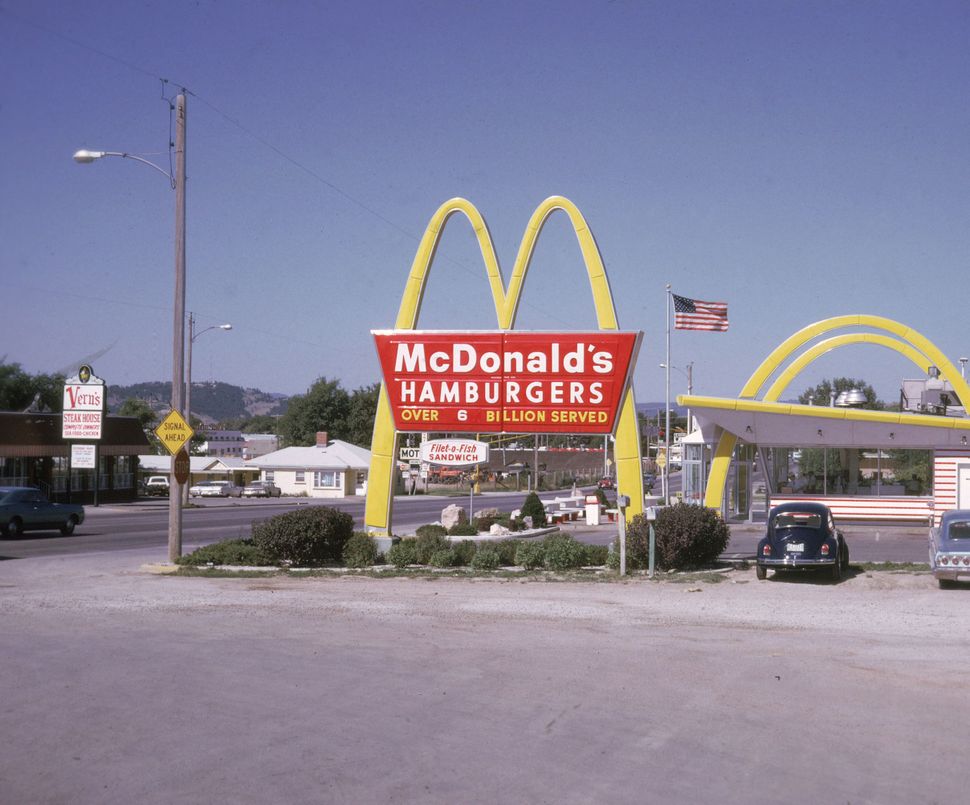 There’s more than meets the eye in the title of “The Founder,” the new biopic of Ray Kroc. For while Kroc carefully cultivated his image as “the founder” of McDonald’s, two brothers named McDonald invented their namesake restaurant chain. By the time Kroc — a traveling salesman played by Michael Keaton in the film — came knocking on their door to sell them more milkshake mixers, the McDonalds had already sold nearly two-dozen franchises bearing their name and boasting the elements that made the fast-food chain known throughout the world: speed, efficiency and uniformity.

That being said, the McDonalds were better chefs and restaurant managers than they were businessmen. Having traveled the country eating in dirty diners offering poor service, Kroc saw a major opportunity in spreading the gospel of clean, shiny and family-friendly McDonald’s restaurants across the nation. After some considerable pestering and hokking a tshaynik, Kroc got the brothers to agree to bring him on as a partner to devote his energies solely to selling more franchises.

It was tough going at first. Kroc’s initial efforts failed miserably. He sold franchises to country-club pals who then neglected the restaurants and strayed from the winning formula. Whatever shares he had in the other restaurants provided a scarce income. Kroc nearly lost his home, which, unbeknown to his wife, he had put up as collateral for a business loan. It wasn’t until a chance meeting with aspiring financial consultant Harry Sonneborn (played by B.J. Novak) that the tide turned.

Sonneborn was born in Indiana to Minnie Greenbaum and Mark Harry Joseph, and raised in New York City by his father’s sister, Jeanette (Joseph), and her husband, Louis Sonneborn, who were Orthodox Jews. He got his first job in the Garment District of Manhattan before climbing the ladder at Tastee Freez, where he worked his way up to vice president of finance.

Overhearing Kroc’s plight, Sonneborn offered to look at his books. He told Kroc that given his deal with the McDonald’s and the way that the franchise agreements were structured, his profit margin would always be razor-thin. But Sonneborn saw a larger potential revenue stream: the land underneath the restaurants. He and Kroc established a separate real-estate business, which they aptly named Franchise Realty Corporation — the real precursor to McDonald’s Inc.

Thus the bedrock of the company was founded literally on bedrock, owned by Kroc and leased to franchisees who were under the strict supervision of their landlord to uphold the chain’s standards. Cutting them out of this arena, Kroc presented the plan to the McDonald brothers as a fait accompli, and they had little choice but to accept his offer of a buyout.

Unfortunately, Sonneborn’s financial wizardry did not extend to his own investment in the company. He served as president of McDonald’s until 1967, when he and Kroc had a bitter falling-out. He resigned and swore never again to eat at a McDonald’s. Sonneborn sold his share of the business for $3 million – a tidy sum at the time – but had he held on to it, he could have cashed out a decade later for $100 million. By the time of his death in 1993, his stock reportedly would have been worth over $1 billion.

Interestingly, though, when Sonneborn died, his survivors asked that in lieu of flowers, gifts be given to the Ronald McDonald House.