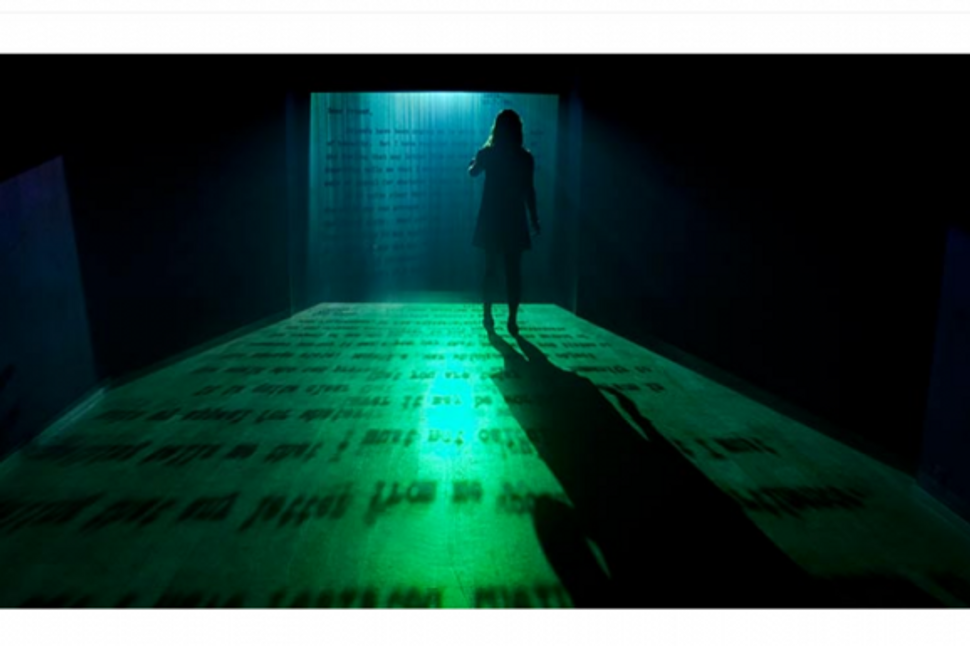 When Ajay Raju saw Jitish Kallat’s “Covering Letter” installed in India two years ago, he was struck by the experience of walking through the mist “screen” or “curtain,” upon which was projected a 1939 letter that Mahatma Gandhi wrote to Adolf Hitler.

At the installation, wiewers enter a dimly-lit room, whose floor is lined with plush carpet that muffles sound and lends the room a meditative quality. A fog machine provides the “canvas” upon which the letter scrolls every two-minutes or so. To exit the one-room installation, viewers walk through the fog and find themselves beneath bright lights, as they leave the gallery.

Raju purchased the work — whose cost he declined to share to avoid “cheapening it” — and donated it to the Philadelphia Museum, where it is on view through March 5 in the Perelman building.

The installation, says Amanda Sroka, assistant curator of contemporary art at the Philadelphia Museum, explores the “corridor between good and evil,” in which viewers place themselves amid Gandhi’s plea to Hitler to prevent war.

“When you’re in the midst of that mist, those words become illegible. They become erased by your body,” Sroka says. “We are all capable of good and evil.” Raju finds contemporary meaning in Gandhi’s attempt to converse with an enemy knowing full well that the message was futile. It’s very likely that Hitler never received either of the letters that Gandhi penned. In both, he addressed Hitler as “friend,” a decision he explained in the second letter, as he felt he had only friends and no enemies.

“It is quite clear that you are today the one person in the world who can prevent a war which may reduce humanity to a savage state,” Gandhi wrote.

When Raju first suggested the work be exhibited the weekend after election day, he figured it would be a divisive time. But Donald Trump hadn’t yet emerged as a viable candidate. “At the point when we made all these plans, I expected the left and right would still be at each other’s throats,” he says. “But I didn’t expect the kind of divisiveness that we’ve seen.”

On social media, people often communicate by “ripping each other’s humanity first, and then we let the other party know that we disagree,” Raju says. The exhibit “Covering Letter” reminds viewers to be civil. “We can find humanity in people who quite frankly don’t have any humanity, someone like Hitler,” he says.

To that end, Raju’s foundation created an essay competition for high school students to respond to Gandhi’s letter; the winner will receive a $10,000 scholarship.

Ultimately, he feels, the impact of the work grows over time. “People react to it days after. They start talking about it,” Raju says. “Comments start ricocheting back and forth. All of a sudden, it has a deeper meeting.”