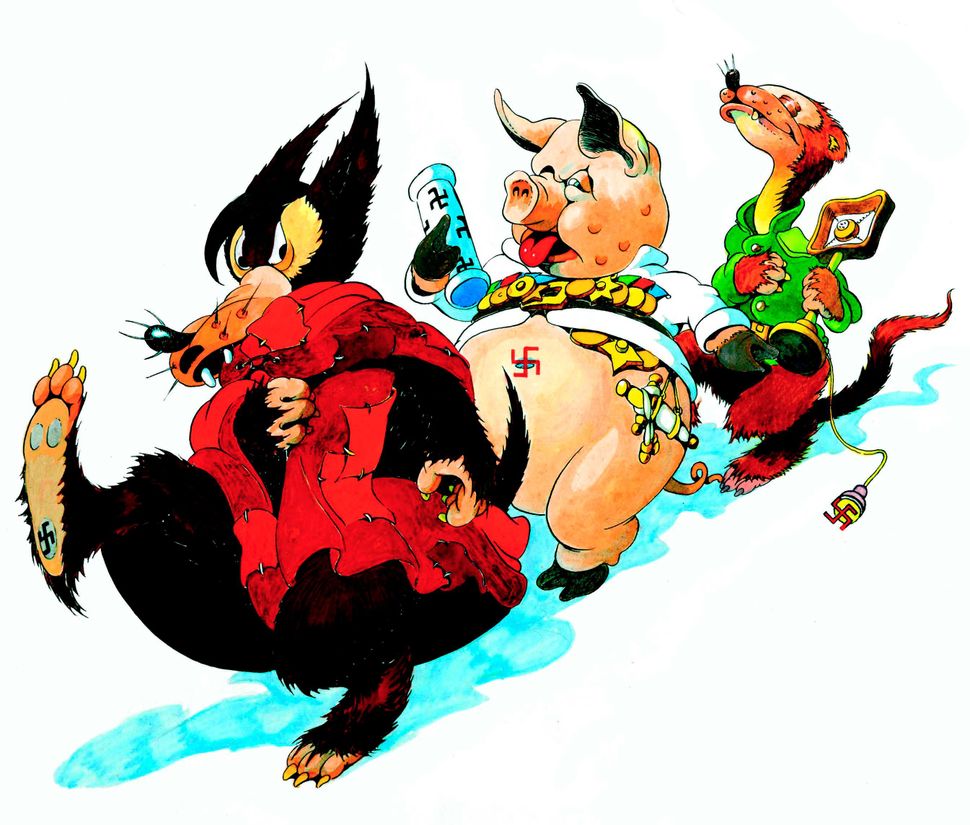 You might not remember where you were when you first saw a panel from Art Spiegelman’s “Maus,” but you probably do remember how you felt: shocked.

Jews as mice, Nazis as cats, the Holocaust presented in the form of classic cartoon enmity. What could be stranger, more unsettling? Here’s what: discovering that the first artist to have this idea wasn’t, like Spiegelman, a card-carrying postmodernist pondering the events from a safe historical remove. He was a German Jewish artist, Horst Rosenthal, an inmate of the French internment and transit camp Gurs, passing the time by imagining, in full color, how Mickey Mouse might fare there.

The result, “Mickey au camp de Gurs,” is the first object on display in the major exhibition at the Mémorial de la Shoah in Paris, “Shoah et Bande Dessinée” (“Holocaust and Comics”).

A little booklet, proclaiming on its cover that it is “published without the authorization of Walt Disney,” Rosenthal’s Mickey calls to mind the Tijuana Bibles, exuberantly pornographic comic strip parodies that circulated in the United States in the mid-20th century. Here, though, instead of an orgy, Mickey is subjected to interrogation (“Vous êtes juif?” an official asks) and internment. And though Mickey’s adventures end at Gurs, dreaming of escape to America — Rosenthal didn’t know, as he drew, that he would be murdered at Auschwitz in September 1942 — they raise the question that motivates and enlivens the entire exhibition: What’s at stake when the great tragedy and outrage of the Holocaust are rendered in comic book form?

Spanning 75 years of cultural history, and drawing on sources from more than a dozen countries and languages, the exhibition and its excellent, richly illustrated catalog reflect a growing awareness that comics aren’t just one medium among many in which the Holocaust is represented, but a surprisingly prominent one.

A teenager coming of age today might encounter the Holocaust in comics before she sees it represented in literature, film or a textbook — whether she stumbles upon “Maus” itself, or the origin story of the X-Men villain Magneto, or, especially in Japan, one of the manga adapted from “The Diary of Anne Frank.” That’s why, perhaps, a museum devoted to memorialization would undertake an exhibition in which very little conveys traditional reverence and so much is strange and uncomfortable.

Much of this strangeness is, as in the case of Rosenthal’s Mickey, linked in one way or another with “Maus.” Take “La Bête Est Morte! (“The Beast Is Dead!”), first published in 1944. Illustrated by the French artist Edmond-François Calvo, the comic retells the world war, then still ongoing, as an animal fable with Nazis as wolves, Brits as dogs and the French as rabbits, frogs and storks— all distinctly Disneyesque in appearance. Though mostly only alluding to the identities of Hitler’s victims, as when it describes the Great Wolf as attempting the “total annihilation” of “certain tribes of harmless animals,” in one panel, “La Bête Est Morte!” illustrates uniformed wolves gunning down a lineup of rabbits next to a poster declaring Jews “sentenced to death.” The historian Tal Bruttman calls this “the first mention of the Holocaust in comics”; it’s another powerful antecedent to “Maus,” though Spiegelman says he discovered it only after beginning to publish his own grim animal fable.

Sensibly, although “Maus” unquestionably serves as the fulcrum of the exhibition — and it should, because it developed these early ideas to their logical end, and because its success in the 1980s and ’90s opened the door for so much work that followed — the curators devote relatively little space to Spiegelman or his work, already so familiar.

A second towering figure who couldn’t be left out is Magneto, the X-Men villain whom Marvel writer Chris Claremont supplied, in the 1980s, with the backstory of a Jew at Auschwitz, and who, given the success of X-Men movies, might now be the world’s most recognizable Holocaust survivor. But the exhibition and catalog mostly dedicate their energy to lesser-known works.

For example, the curators have located many striking moments, during the war and after, when superheroes like Superman, Captain America and the Unknown Soldier encountered Hitler and the death camps, usually without mentioning Jews, or, as Jean-Paul Gabilliet points out in his catalog essay, trying to liberate them.

Much attention gets lavished on Bernard Krigstein and Al Feldstein’s virtuosic “Master Race,” an eight-page comic, published in 1955, about the commander of the “Belsen concentration camp” encountering one of his erstwhile prisoners on the subway in America. Recolored, it has been republished in the catalog, along with Spiegelman’s detailed panel-by-panel annotations, an “autopsy of a masterpiece” that Spiegelman wrote as a college term paper back in 1967.

Fully half the exhibition concerns the transformation of the field of comics after “Maus.” The curators, comics journalist Didier Pasamoniak and historian Joël Kotek survey the outpouring of Holocaust testimonies and second-generation memoirs in French, English, Hebrew, Japanese and several other languages, some of the most fascinating and visually striking of which are not at all well known in English yet. They argue that “Maus” made the graphic novel a natural home for the memorialization of other atrocities, like the Rwandan and Armenian genocides, which are represented in works like “Déogratias” (2000) and “Varto” (2015).

The curators also track the spread of fictional and symbolic uses of the Holocaust in recent comics, not all of which are sympathetic. Captioning an example from a 2005 graphic novel, “Prisoner Number Zero,” which dispatches the superhero Wolverine to Sobibor, they question whether this is “a suitable way to depict the death camps,” noting that “it is the nature of comics to trivialize and vulgarize their subjects.”

That might sound like a surprisingly dismissive statement coming from curators who otherwise treat comics seriously and without condescension. But it’s also the key to answering the question, at the center of the exhibition, of what’s at stake in the relations between an art form, comics and a subject, the Holocaust.

True, comics and the Holocaust overlap historically. The comic book exploded as a phenomenon precisely during the years of World War II, and matured aesthetically, and in terms of subject matter, in the postwar decades, just as the Holocaust grew as a subject of memorialization and study in Europe and America. But that’s mostly coincidence. What matters is that, as Pasamoniak and Kotek say, comics do trivialize.

Like Ferne Perlstein’s documentary, “The Last Laugh,” about the Holocaust and comedy — which was also, as it happens, inspired indirectly by Spiegelman’s graphic memoir — what “Shoah et Bande Dessinée” can help us to appreciate is how important, and how powerful, it is for a topic that demands reverence to be treated in a medium that is allergic to it. Comics consistently, if not inevitably, stylize and simplify and exaggerate, and — no matter how many prizes are won, or how many dissertations are written about the medium’s vast artistic potential — they never let their audiences forget their roots in shoddy printing and cheap entertainment.

One of the challenges to Holocaust memorialization is, and has always been, the ubiquity of easy, meaningless clichés. Many of us, however respectful of history, find ourselves approaching novels and movies about the Holocaust warily now, with what has been referred to as “Holocaust fatigue” — if not avoiding them altogether.

Comics can disarm such reactions precisely because they are so profoundly wrong for the job. Whether it’s humans drawn as animals or a young boy’s survival of Auschwitz as a cartoon mutant’s origin story, there’s something off about these works. And that’s true even of graphic works of simple, straightforward testimony, because rendering speech and historical experience into strips of cartoons involves so much distortion that a reader cannot forget, as she might with a book or movie, that this is a highly unnatural, profoundly deliberate way of communicating. Comics keep it weird, which gives them the power to stop us from feeling like we’ve already seen it all.

In some cases, comics’ tendency toward inappropriateness slides over into more deeply disturbing, pernicious territory. To their credit, the curators recognize the relevance to their exhibition of the exploitation of cartoons and comics by neo-Nazis, white supremacists and Holocaust deniers. And they conclude the exhibition with a display about Will Eisner’s final project, “The Plot” (2005), which was intended to counter anti-Semitism.

Eisner believed, with absolute faith, that comics are perfectly suited to education (among many other contributions to the medium, he produced instructional manuals in comics form for the armed forces). The jury’s still out as to whether “The Plot,” which has now been circulating for a decade, has had even the slightest ameliorative effect on anti-Semitism, or whether it ever will. But what “Shoah et Bande Dessinée” demonstrates, beyond doubt, is that comics — inappropriate as they may be — will be central to Holocaust memory for the foreseeable future.

The “Holocaust and Comics” exhibit runs through October 30, 2017 at the Mémorial de la Shoah in Paris.