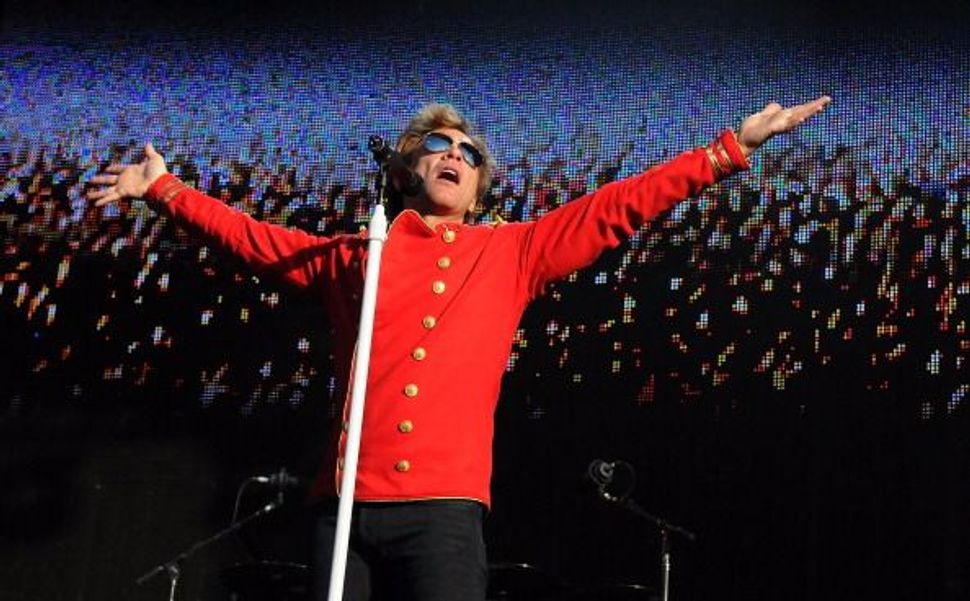 Coming off a banner year in which the 34-year-old pop-metal band released its sixth No. 1 album, Bon Jovi is ready to rock its way through 2017, kicking off a major tour of U.S. arenas in Greenville, South Carolina, on February 8, with shows scheduled well into April. Why, at the age of 55, does Jon Bon Jovi want to prance around onstage like he’s still in his 20s? Well, for one thing, in an age when rockers are still going strong into their 70s — witness last year’s “Desert Trip” festival in Indio, California, which featured a half-dozen rockers in their eighth decade, including Paul McCartney, Bob Dylan, Mick Jagger and Neil Young — he isn’t even a senior citizen. Besides which, last time out, in 2013, he earned more than $200 million on tour. So don’t ask such silly questions. Boy’s gotta earn a livin’.

Despite a few setbacks over the decades — including record company feuds, lack of respect from the rock establishment (critics still mock the group, and the Rock and Roll Hall of Fame has consistently refused to honor it), and, most notably, the departure of founding guitarist and co-songwriter Richie Sambora a few years ago — the band still commands the loyalty of millions of fans. And through his political and philanthropic work, Jon Bon Jovi — who campaigned for Hillary Clinton last year, and whose Soul Foundation just completed a visual documentary project about the rebirth of Camden, New Jersey — has gained the respect of peers and people in high places.

It’s not surprising that, at this point in his career, Jon Bon Jovi would be engaging in acts of tikkun olam, or repairing the world. His songs have always described a yearning for spiritual solace, and his path has long been shared with close Jewish collaborators.

Singer-guitarist Jon Bon Jovi’s oldest musical partner is Bon Jovi keyboardist and occasional songwriter David Bryan. Born David Bryan Rashbaum, Bryan has been playing in bands with John Bongiovi (as the singer was known before his own name change) on the Jersey Shore since they were teenagers in Perth Amboy. In the early 1980s they were in a series of horn-heavy bands, including Atlantic City Expressway and The Rest, that adopted the sound of such local heroes as Southside Johnny and the Asbury Jukes, and their more successful peers, Bruce Springsteen and the E Street Band.

Both the Jukes and the E Streeters were — like Bon Jovi would be — made up primarily of Italian and Jewish musicians, and “Southside Johnny” Lyons became something of a mentor to young Bongiovi, even letting some of the Jukes to perform with him at times.

Bongiovi’s early bands often covered songs by the J. Geils Blues Band — usually referred to by those in the know as the J. Geils Jews Band, given the predominant ethnic makeup of that group.

Bongiovi gave Rashbaum the task of assembling the musicians who would become the original members of Bon Jovi. Rashbaum had played with bassist Alec John Such and Cuban-American drummer Tico Torres, and they formed the rhythm section. Such had played in the band Message, whose guitar player, Richie Sambora, persistently knocked on the door to audition for the group, even though at the time they weren’t looking for an additional guitarist. Sambora’s talent was clear, however, and thus Bon Jovi was born. As it turned out, all five members of the group had been delivered as babies by a doctor named Greenberg at the Raritan Bay Medical Center.

Something of a musical prodigy, the classically trained Rashbaum had studied piano with Emery Hack, a professor at The Juilliard School, for 13 years. After high school he attended Rutgers University, where he racked up a 4.0 average on his way to earning an undergraduate degree in premed, but, breaking the hearts of Jewish mothers everywhere, he dropped out of college in order to attend conservatory at Juilliard.

Bongiovi had a leg up over his peers in that his cousin, Tony Bongiovi, was a well-known producer and engineer in the business who had worked with Motown stars, Jimi Hendrix, the Ramones and Talking Heads before founding the Power Station, one of Manhattan’s top recording studios, in 1977. At age 15, John had a part-time gig as a gofer and custodian at the studio, garnering a valuable education. He graduated to session vocalist, and eventually it was time to record a few demo tracks, including one, “Runaway,” that found its way to a Mercury Records honcho named Derek Shulman.

Three Scottish-Jewish brothers, Derek, Phil, and Ray Shulman, had formed one of the original progressive rock groups of the United Kingdom, Gentle Giant, in 1970. The band bubbled under stardom for a full decade before splitting up. Derek Shulman became a highly successful record executive, and from his perch at Mercury he discovered and signed John Bongiovi. (Among the choice morsels included in Bryan Reesman’s “Bon Jovi: The Story,” published by Sterling in the fall of 2016, is that only Bongiovi signed a contract; his Bon Jovi band mates were legally just hired hands.)

Shulman’s first moves were to change Bongiovi’s stage name to Jon Bon Jovi; to change the band’s name, Desire, to Bon Jovi, along the pattern of Van Halen, and to have Rashbaum drop his family name, thereby deracinating the group. Shulman also introduced Bon Jovi to Motley Crue manager Doc McGhee, who became Bon Jovi’s manager, too, and, much to Jon Bon Jovi’s eventual chagrin, became responsible for the band being forever associated with the “hair-metal” groups of the 1980s. (That being said, Jon Bon Jovi, whose father was a hairdresser, did have great hair.) By the mid-1980s the group shifted away from the heavily R&B-influenced Jersey Shore sound and toward pop-metal, under the influence of Canadian pop-metal pioneer Aldo Nova. Once the band hired “song doctor” Desmond Child as a co-writer, all the elements were in place, and producer Bruce Fairbairn captured the group’s huge, made-for-arenas sonic wall that carried it to the top of the charts (and sold out those arenas) for the rest of the decade. Then, with Fairbairn gone, and pop-metal killed off by grunge-rock, the group stumbled through the 1990s, until producer and songwriter John Shanks came on board and righted the course with the 2005 album, “Have a Nice Day.” Shanks has helmed every Bon Jovi album since then, becoming something of a sixth member; indeed, when the band goes out on tour this spring, Shanks will join them onstage for the first time, playing his guitar, a role the son of the acclaimed late photojournalist and Brooklyn-Jewish native Ann Zane Shanks and the television executive Bob Shanks previously played for Melissa Etheridge.

Bon Jovi’s song titles tell the rest of the story of this spiritually inclined outfit: “Livin’ on a Prayer,” “Keep the Faith,” “Living in Sin,” “I Believe,” “Little Bit of Soul,” “Save a Prayer,” “Hey God” and “Something to Believe In.”