In December, Time Magazine named Donald Trump the Person of the Year. On their cover they placed that incredible, deeply nuanced, subversive picture. Lurking behind Trump on that photo was an ominous shadow, that, as many viewers pointed out, did not correspond to the lighting, and could only have been the product of Photoshop. It was unnatural, and all the more foreboding because of it. Well, now, 13 days into the Trump presidency, we know to whom the shadow belonged – Steve Bannon. 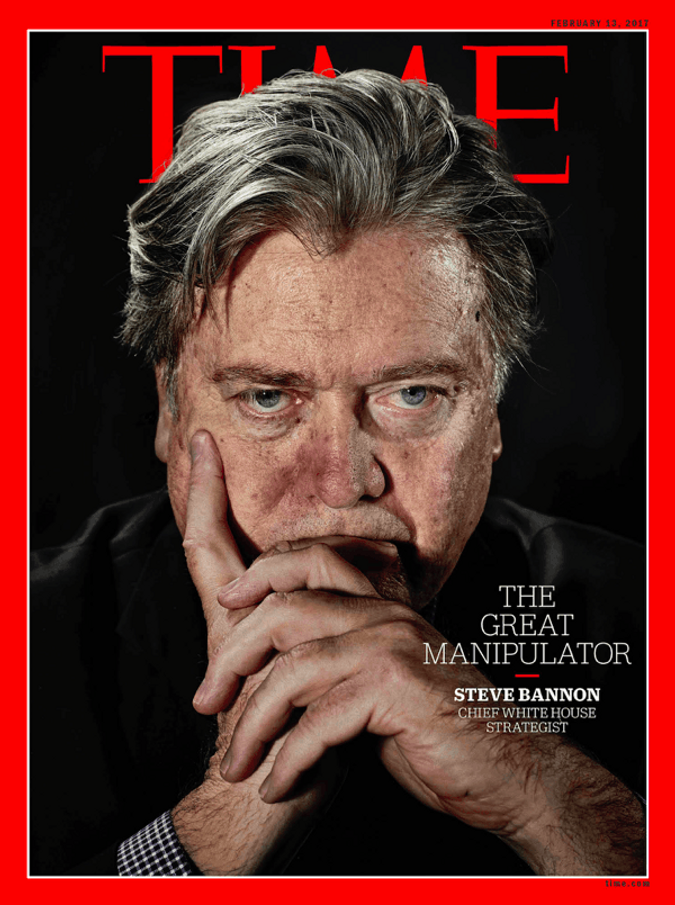 There he was, a phantom in the background – but now, with Time’s new cover (which, like the Trump cover, was photographed by Nadav Kander), they’ve stripped away the backdrop and cast a light on the specter in the dark. And, in this cover, we are most certainly in the dark – Bannon’s black suit melts into the black background and the light’s dim reflection on his hunching shoulders gives only the suggestion of bodily form. Bannon here is a floating head, with floating hands – fitting for a “Great Manipulator.” His body is immaterial to this role – quite simply, the “Great Manipulator” only needs his head to generate his ideas and schemes, and his hands to pull the strings.

The outsized importance given to the head and hands serves another purpose here – notice the incredibly tight composition of the photograph. Bannon is inescapable, he fills almost the entire frame and outside of him there is nothing. We have nothing else to distract our gaze, we must concentrate entirely on the face, the hands. So what do we see? First we must note the physical degradation of Bannon’s face – the pockmarked skin, the discoloration of the left side of his nose, the bullfrogish eyes, mouth and bloat. I don’t mean to be ageist, or simply to shame Bannon for his appearance. Nor do I mean to suggest that physical degradation always implies moral degradation as well. That being said, physical ugliness has long been an aesthetic marker of immorality (just look at any portrayal of the devil from Medieval art), and in relation to Bannon, we might turn to philosopher Peter Carmichael’s words in “The Sense of Ugliness” – “There is a psychic tympanum on which the ugly and the immoral both strike, each resounding through the other.” In other words, Carmichael asserts that we use the same mechanism to perceive ugliness and immorality – when the two link up, as in the case of Bannon, the sensation of both is heightened. We read into his physical appearance all the moral failings we ascribe to his person – the effect is both horrifying, and on a visceral level, disgusting. 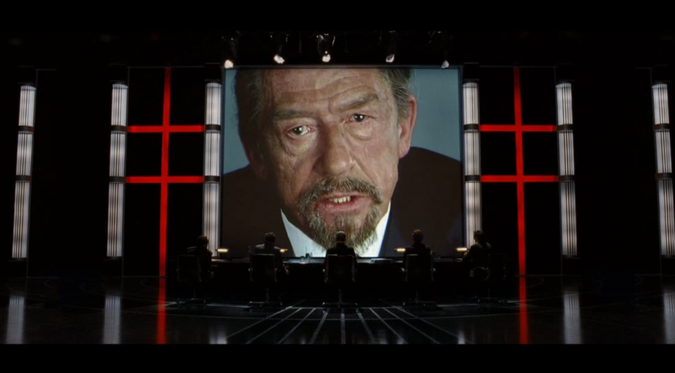 And there are certain aesthetic markers of immorality on this cover, aside from Bannon’s face. The black and red that surround Bannon’s face has its reference in pop culture depictions of evil. The Empire in “Star Wars” employs the color scheme, as does the fascist government in “V for Vendetta.” The colors’ status as signifiers of evil likely stems from the First World War when it was employed in the flag of the German Empire (Western propaganda portrayed the Germans as “Huns,” “barbarians,” insatiable murderers). After the Treaty of Versailles, during the Weimar Republic, the flag’s colors were changed to contemporary Germany’s red black and yellow. But, when the Nazis rose to power in 1933, the flag was changed again to mimic the colors of Imperial Germany.

The Nazis, as the most aesthetically developed of all the fascist regimes, have come to form our shared aesthetic conception of evil, and more specifically, official evil – hence the reliance upon Nazi signifiers in pop-culture (there is no easier way to immediately establish the sides). The red and black symbolism in contemporary society extends beyond the fictional into the flag of Greece’s fascist Golden Dawn Party, with its thinly veiled swastika symbol. 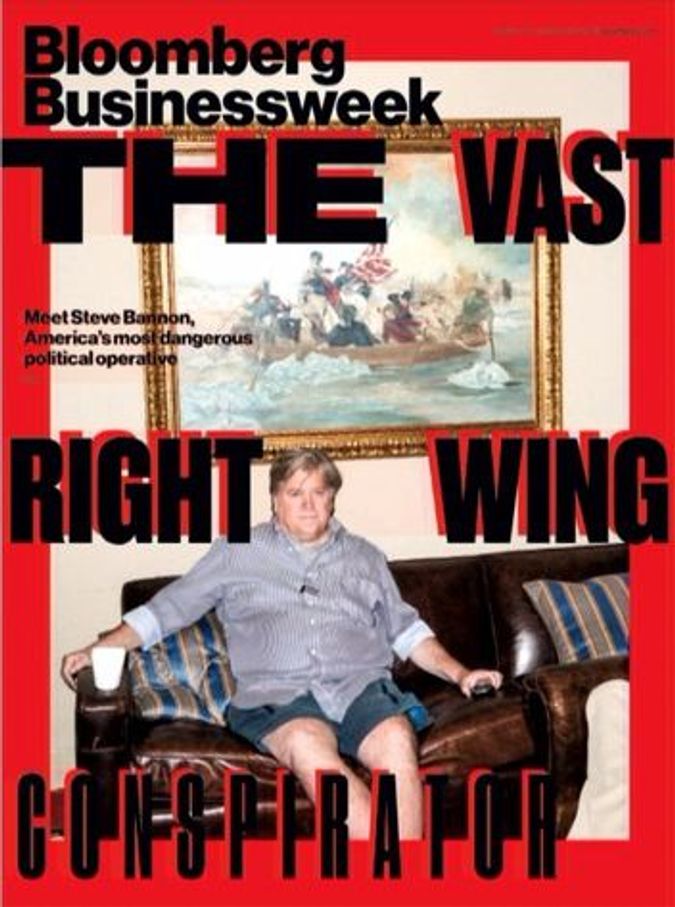 We have Bannon’s dilapidated visage, the claustrophobic composition, the red and black color scheme – what else? Nothing, truly. But this, perhaps, is a statement too. Compare this cover to another Bannon cover photo from a 2015 edition of Bloomberg. The Bloomberg cover plays up Bannon’s appearance for laughs – this guy, really, the one on the couch, is “The vast right wing conspiracy.” The cover acknowledges his danger, but his threat was remote then, and could be appreciated with the remove of humorous irony. Now, the cover is deadly serious. Bannon, as we have already discussed, has truly arrived, and he is inescapable. The austere nakedness of the cover drives this claustrophobia home – in the black confines of our psychic space: our thoughts, this face.

In his book “Camera Lucida,” philosopher Roland Barthes, who wrote so extensively on the reading of images, identified two elements of a picture: the studium and the punctum. The studium he defines as the culturally encoded elements of a photograph, “of the order of liking, not loving.” “To recognize the studium,” he writes, “is inevitably to encounter the photographer’s intentions” and once recognized we “approve or disapprove of them, but always understand them…for culture is a contract arrived at between creators and consumers.” Up until this point, we have discussed the studium of Time’s cover. It seems readily apparent that the photographer and art directors intended to portray Bannon as evil, as menace.

But what of the punctum, that slippery concept that Barthes defined as an “element which rises from the scene, shoots out of it like an arrow, and pierces me.” The punctum is that subjective element, that thing peculiar to each viewer. For this viewer, the punctum is Bannon’s eyes. Bannon’s left eye looks roughly just below the camera, almost on center, almost at the viewer. And it is towards this eye that we are initially drawn. The position of Bannon’s hand naturally draws our attention to this side of his face, and his finger points up, drawing our gaze to the eye. But it is the right eye that proves more interesting. Bannon’s right eye gazes to the right, off center, out of frame (this lazy eye is yet another marker of his physical ailments). He is looking, in effect, at two things at once. He is sitting for the photo with his left eye, but his mind is elsewhere, somewhere off-camera, somewhere hidden. It is unnerving in the way that all duplicity is unnerving. We can’t help but feel that this photo is a distraction, that, while we look, there is something going on behind us. A plot betrayed by Bannon’s gaze.

Let’s end with another note from Barthes. In his introduction to “Camera Lucida,” Geoff Dyer relays a line from a radio interview Barthes did in 1977: when asked about his interest in photography, Barthes replied that it “probably has to do with death. Perhaps it’s an interest that is tinged with necrophilia, to be honest, a fascination with what has died but is represented as wanting to be alive.” Bannon the shadow – come to life.