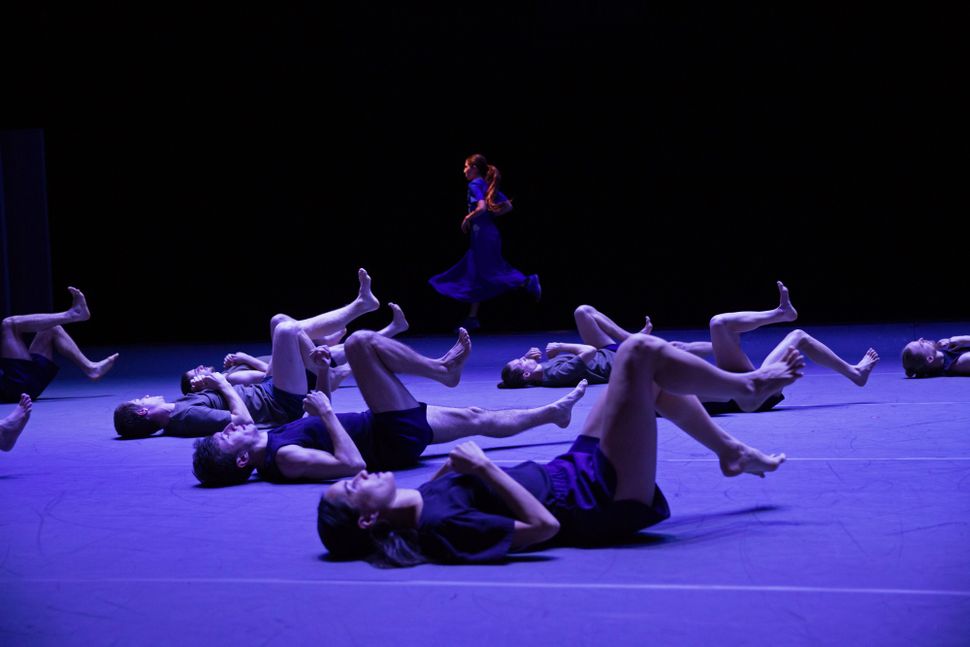 Ohad Naharin, the acclaimed Israeli choreographer of the equally acclaimed Batsheva Dance Company, recently had the New York debut of his most recent work, “Last Work” at the Brooklyn Academy of Music. The piece is not (let’s hope) Naharin’s final creation, at least there is no indication, either in the press or from the man himself, that he intends to quit choreography. So, whence the title?

Any artist’s last work is given a certain mystique by virtue of it being the last (for example, much has been made of the historical poetics of Gustav Mahler’s death soaked Ninth Symphony). We view these last works as both premonitory and reflective – they are the artist’s last creation for the future (we sometimes see, as in the case of Mahler, a premonition of death), but also the artist’s last idea, last assessment of his or her work, a summing up. This mythology of a last work, as both prediction and summation, as a work that harkens towards both the past and future, creates an irresistible internal tension, pushing and pulling, both exciting and morose.

Perhaps it was this tension that Naharin sought with “Last Work.” The choreographer does not provide an explanation of the title, but, viewing the dance, it seems entirely fitting. The dance opens with a lone figure in the back left of the stage – a woman in a blue dress, running in place at a steady pace on a hidden treadmill, staring, blankly, ahead. (The running, according to the dancers I spoke with after the show, is incredibly difficult. Not least because of the physical strength needed to run at that pace for that length of time, but also because of the boredom stemming from the perpetual off stage gaze and repetitive motion). Her appearance seems like something out of a David Lynch film – self consciously kitschy, unnerving, vaguely forebodingly beautiful, and, of course, blue. She remains running in the background for the entire hour and five minute length of the show, always, like those opaque Lynchian conspiracies, lurking in the background, perhaps a part of the action, perhaps removed, or perhaps the occasion for the entire piece. Her presence proves to be incredibly tense. Perpetual, static motion is uncomfortable – we constantly wait for her to move, for some release, but we are never rewarded (add a touch of Beckett’s “Waiting for Godot” to the Lynch). 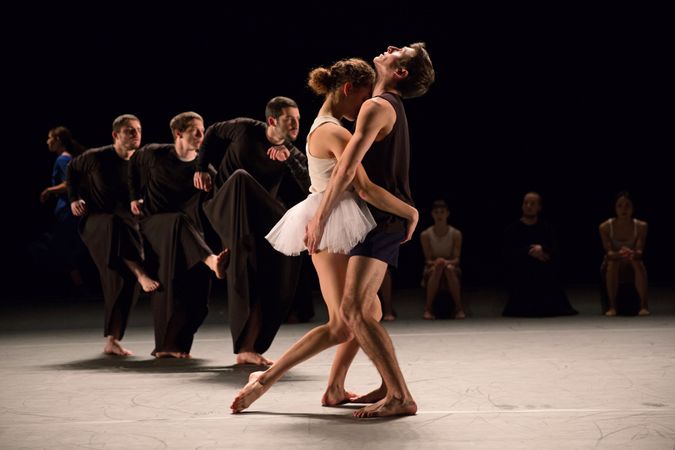 When the first dancer (aside from the runner, who, in her own way, is also a dancer) emerges on stage, he begins his solo with a swirling leg motion. It appears as if he is either the engine of the treadmill, or propelled by it. This ambiguity as to the source of motion will repeatedly come into play throughout the dance. Long stretches of time pass in which the viewer forgets about the runner altogether, only for the dancers to suddenly frame her with their bodies, or for the music to cut out, leaving only the sound of the treadmill (there were some long stretches of silence in the piece that allowed for an ambient soundtrack comprised of the mingling sounds of coughs, shifting audience bodies, and the ever present treadmill – a certain John Cage-like touch that only heightened the tension of the room). The runner seems to be important to the dancers in some way, but we do not know how, and from the get go, her ambiguity asks us to assume an interpretive, almost philosophical stance towards the performance.

But enough about the runner, she is only one component of the piece and you must watch the piece for yourself to feel how uncomfortable her presence is. Though I am passingly acquainted with the world of dance and choreography (though I am by no means an expert, or close) this was my first experience with Naharin’s work – and it was nothing short of a revelation.

Truly. I do not mean to use that word lightly. I don’t want to give too much away in terms of the choreography (one of the dance’s primary merits was its consistent ability to shock), but there are certain aspects which, like the runner and the opening solo, cannot go unmentioned. First, the dance can in one moment be incredibly animalistic, but rigid and authoritarian in the next. Dancers slither like snakes, crawl like worms, and peck and jerk like flightless birds only to suddenly assemble and march in stilted staccato steps. The abrupt changes in mood and style constantly keep the audience on edge, expectant and jittery. 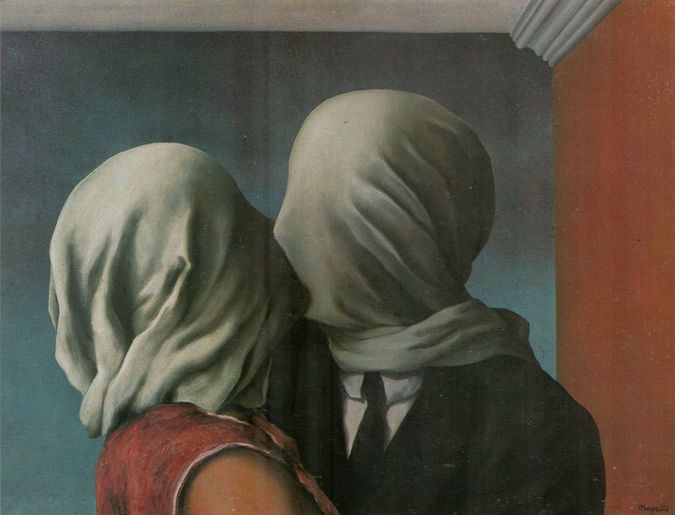 This contrast between animality and rigidity plays out in the piece’s unremitting sexuality as well. Each scene (the dance can be grouped into roughly 5 or 6 of them) deals with sex in a different way – from the cool, clinical, decidedly unsexy opening to the outrageous, humorous, wild carnality of the middle and end of the piece. In one scene, the dancers wear white masks and the effect is reminiscent of the strange sensuality of Rene Magritte’s “The Lovers” – another layer in the dance’s already thickly layered field of references. In another of the dance’s most spectacular moments, a sort of love story plays out between two dancers – behind them, a trio of male dancers don black robes. The movement is slow, painful, heartbreaking. The black robes lend the scene a sort of religiosity, a repressive presence that only intensifies the erotic charge of the choreography.

If all of this sounds vague and confusing, it’s because the dance itself is vague and confusing. There is no coherent narrative, the planned disorder of the choreography can be disorienting, and the dancer’s execution of Naharin’s Gaga style is so fluid, so dependent upon the individual dancer, that it can be alienating to watch. The only through line of the entire piece is a crescendoing tension, informed by the stillness of the runner and the swirling contradictions of the choreography.

The soundtrack, by Grischa Lichtenberger and Maxim Warratt, is expertly crafted as well. Ambient without being boring, fun without being campy, passionate without being maudlin. The industrial electronics slowly swell throughout the piece, bursting then receding, then bursting again. Interspersed throughout are Romanian lullabies, which imbue the chaotic, sometimes violent, proceedings with a touch of tenderness (this juxtaposition, however, often proves more frightening than reassuring).

It is on the point of music that the revelations are to be had. I do not mean that it is the music itself that is revelatory, rather, it is the musical quality of the dance. 19th century philosopher Arthur Schopenhauer gave music a privileged standing among the arts because he believed that it was “ a copy of the will itself.” Whereas other art forms sought to represent certain ideas or certain phenomenon, to copy them, music was itself a representation of creation, of the act of representation – it is not a copy of the will, but the will itself. Music, according to Schopenhauer, is the unmediated representation of our innermost being – it does not use other forms to illuminate this meaning, its form is the meaning. 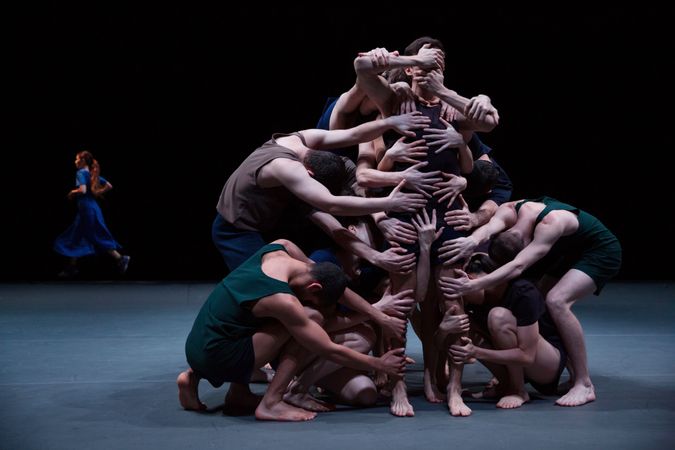 Naharin’s “Last Work” is one of the only visual artworks I have seen that captures the immediacy of music. When we engage with a painting, or another visual work, we cannot take it all in at once (at least not in detail) – we scan the image, focusing on different parts to form the composite whole. Music hits the ears fully formed, and Naharin’s dance hits the eyes in exactly the same way. The chaos of the dance, far from distancing the viewer, draws one in – the flurry of motion is larger and more complete than the sum of its parts. The movements, so internal and personal to the dancers, seem to express something universal. If you cannot take in each individual movement simultaneously, it is less important than the fact the overall sense of movement, the overall emotive impact of the choreography, cannot be missed. The dance screams (sometimes literally) off the stage, and the unbridled energy, the unbridled humanity of its expression is as unmediated as any piece of music. This is the revelation – that dance, an inherently visual art form with so many moving parts, can speak as immediately as sound.

After the show, I got the chance to briefly speak to Naharin. I asked him, because I felt a certain obligation, about the runner, about the music. In all his answers, Naharin was non-committal, preferring to keep the piece’s meaning cryptic (“the runner can mean so many things” he told me).

It was only when I referred to his work as abstract that Naharin gave me a straight answer. “I don’t like that word, abstract,” he said – “Dance can never be abstract.” Dance can be many things, exaggerated, subtle, comic, but fundamentally, he told me, it is visceral, it is lived – if life is immediate, then so is dance. (It seems apt here to quote the great Danish artist Asger Jorn, “Today art has no other tasks whatsoever than to be the direct expression of the human communicated through the artist’s own humanity.”)

I’d like to end back on the stage, in the moments after the dance had formally ended. The stage went black, applause – an almost immediate standing ovation. The stage lights came on again, and the dancers walked towards the front and took their bows. Then darkness, then again – lights, bows. The applause continued and the scene played out again and again. It is a testament to the magic of Naharin’s work that, in the glow of what had just come before, this too became a dance.

The Batsheva Dance Company will continue touring “Last Work” throughout 2017 – you can find their schedule here.