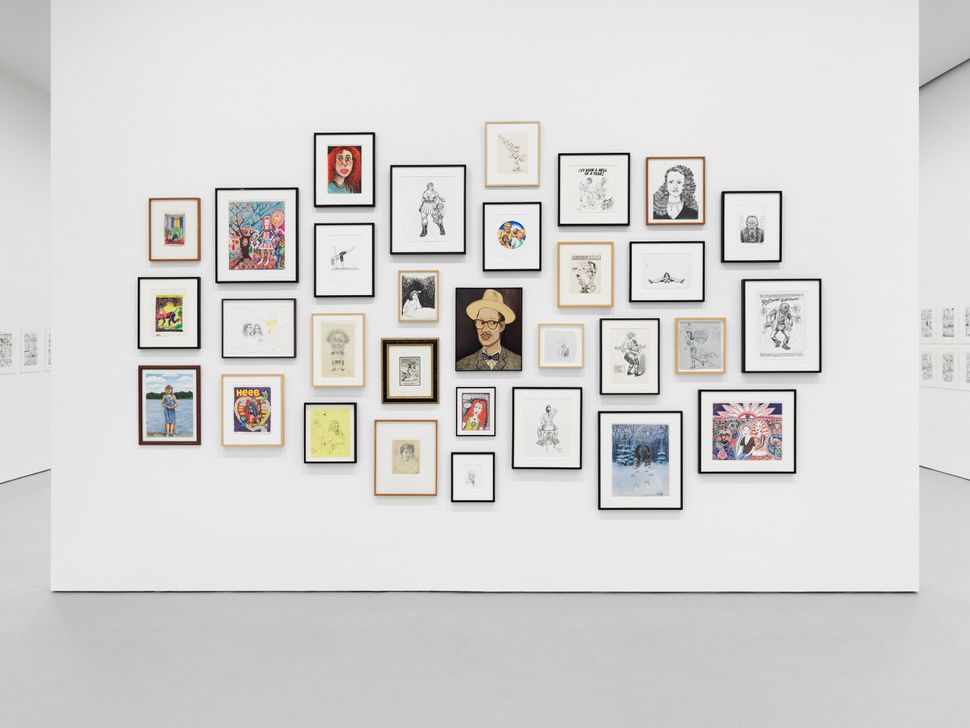 ‘He’s the straight man, I’m the pratfall,”Aline Kominsky-Crumb said by way of explaining the dynamics of the collaborative comics she has been making with her husband, Robert Crumb, for well over 40 years.

Oh, but that much was clear from the start of my time with Kominsky-Crumb. Having ostensibly been told that I was to speak with her on behalf of the Forward, Kominsky-Crumb greeted me by asking if it would be all right for Crumb (who, a publicist had earlier let me know, was not interested in doing interviews) to join us. Though he himself is not Jewish, it should not be much of a problem, Kominsky-Crumb reassured me, because he had married Jews twice. (Also, perhaps Kominsky-Crumb’s oft-sounded observation that “when a Jew marries a goy, you get joy” would hold when a Jew interviews one.)

Seated in a back room of the David Zwirner gallery space on West 19th Street for “Drawn Together,” an exhibit of their work showing there until February 18, the pair performed their “Bob and Aline” show with panache and pizzazz, the sort of ease and naturalness born of a long and fruitful romantic and artistic union. Having just passed through what Kominsky-Crumb happily and proudly described as “miles of ink” — an extensive array of their comics, both co-written and solo, as well as Kominsky-Crumb’s paintings and Crumb’s drawings — the encounter with the flesh-and-blood Crumbs was uncanny.

They very much looked and sounded like the people in their images, and yet they were different: Calmer, more delicate (Kominsky-Crumb has the air of a retired ballet dancer about her), more Zen than zany. They seemed, more than anything, content.

But contentment has long been the secret sauce of the Crumbs’ collaborative work. Although their comics tend to chronicle high jinks and misunderstandings, with titles like “Aline & Bob on Human Depravity” and “Aline & Bob Discuss Infidelity” (and what infidelity might mean in the context of their famously open marriage), they typically end with a tacit confirmation of “Aline and Bob’s bond.” They may be airing their “dirty laundry,” the title under which some of their early collaborations were released. But held up to the light, the “stains” on view are only insistent idealism; mutual, if sometimes grudging, affection; a commitment to art; and a kind of innocence that refuses to yield to the world’s attempts to corrupt it.

Take, for instance, “Aline & Bob in Troubles With Money,” included in the show and appearing in the January 2017 issue of Harper’s Magazine. It details what happened when George Lucas bought Crumb’s original artwork from “The Book of Genesis Illustrated” (shown at Zwirner in 2010) for $2.9 million. The trouble? “We are both dreamers and very bad at managing money; we are so inept,” Kominsky-Crumb said bemusedly, not in the slightest abashed by the ineptitude, going on to concisely summarize the resulting comic:

“Our financial adviser gave us a list of places to invest and said to just cross out anything objectionable, and after we crossed everything out, he said, ‘Well, just put it in your mattress.’ So we are coming out, and we are all despondent, we are just failures at having money, and it’s raining really hard, and we are in this very fancy neighborhood in Paris, where we never go but where [lawyers and financial advisers] are, and I say, ‘Lets just get a cup of coffee,’ and I look in the cafe window, and I see that a cup of coffee is 9 euros, and I say: ‘F—k this! Let’s take the metro back to our neighborhood and get regular coffee.’” 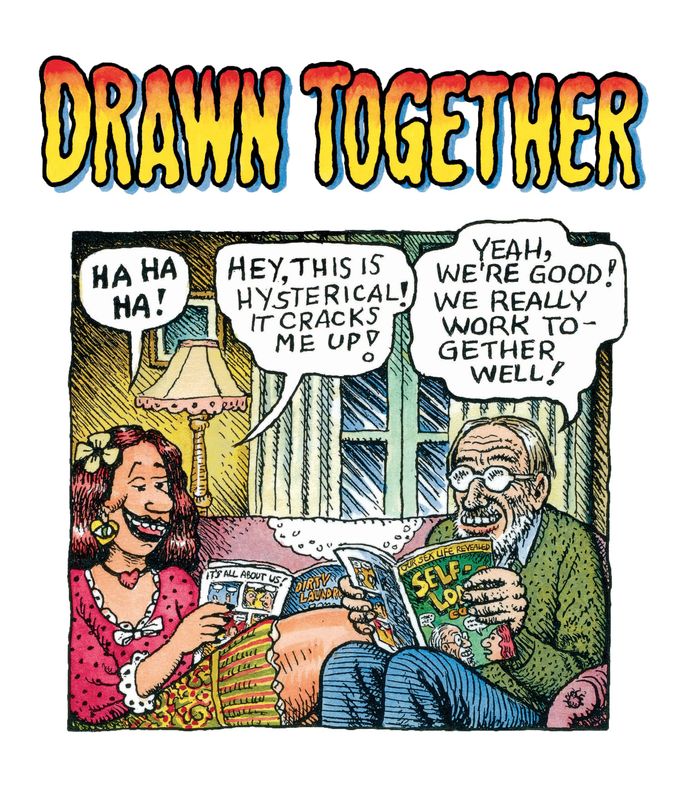 At this point, both Crumbs laughed heartily. And it is also at this point that I must ask you to forgive my slide into sentimentality, but it is abundantly clear that “drawn together” describes not only the process of making such works, but also the logic, even inevitability, of the pair’s connection. They were introduced in 1971, by mutual friends who noticed that Aline Kominsky — the last name is the legacy of her first husband — resembled the coincidentally named Honey Bunch Kaminski, a character in one of Crumb’s comics; three years later they began making comics together, each drawing himself or herself and providing dialogue and commentary. (Their daughter, Sophie Crumb, also a maker of comics, occasionally joins in.)

In person, it’s easy to imagine how the Crumbs work together: They amplify each other’s stories, build on each other’s riffs, “laughing about the absurdity of us,” as Kominsky-Crumb described it. Crumb tended to start, often introducing an incident or theme, and Kominsky-Crumb would quickly pick up the thread of the story, growing excited, eliciting more contributions from her husband. He set her up, she punch-lined the premise. When the subject turned to Kominsky-Crumb’s experience of being Jewish in France, where the couple has lived permanently since 1991, Crumb reminded her that she believed, when she was growing up in Long Island, New York, in the 1950s, that one had to be Jewish to become a doctor, and she ran with the tale, confirming that, living in the “bourgeois ghetto,” she thought it wasn’t legal for non-Jews to go into medicine. France was different. The French “are so nervous about being Jewish,” she said. This made Crumb remember the time he met a woman named Francoise Lifshitz at a party, and loudly asked her if she was Jewish, causing her great consternation. But with a name like that, Kominsky-Crumb finished, who was she really kidding with her whispers?

And there was this exchange:

Crumb: “It’s funny, there are four American Jewish women [in our village]. Aline is one, and there are three others. And they all hate each other.”

Kominsky-Crumb: “It reminds me, when I was growing up, there was one side of the family that never talked to the other, and I thought there had been a murder. And later I found out it was about a dress. When my cousin got married she dared to tell my great-grandmother what dress she had to wear, the color she had to wear. My great-grandmother was so deeply offended that she cut her off. They never talked to that side of the family again.”

Then it was time for the Crumbs to tape another interview. They would be heading back to France the next day. Did they feel validated to be so acknowledged and celebrated? “If we were younger, it might feel like validation, but we are too old to feel validated,” Crumb said, and “the rich people who buy art are our age now.” But perhaps validation was a concern, just a bit. “My mom will be excited to see this article in the Forward,” Kominsky-Crumb said in parting. (Hi, Aline’s mom!)