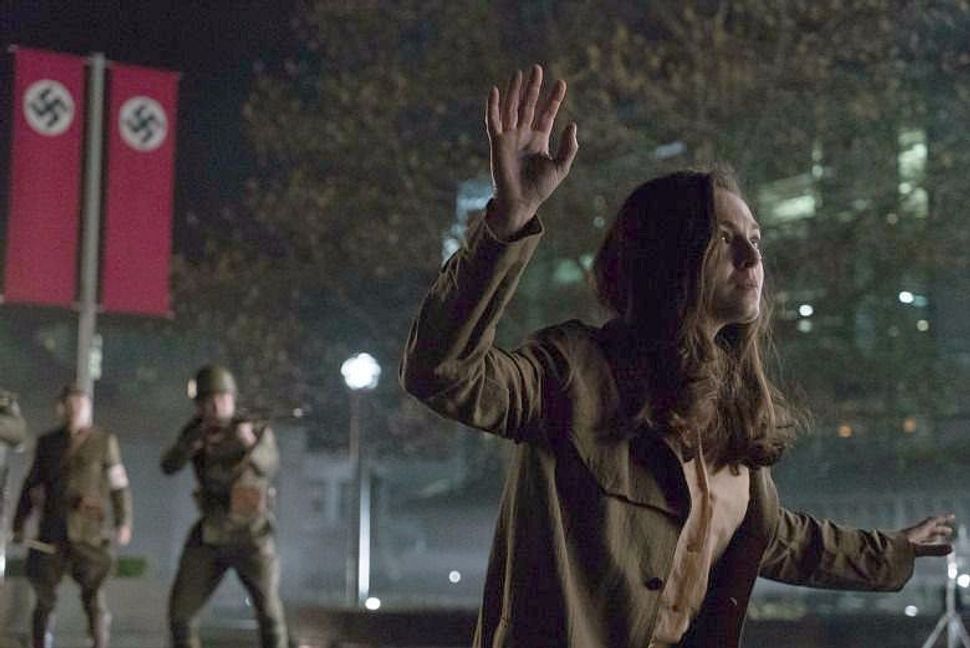 In case anyone needed reminding, the transition of presidential power to Donald Trump’s administration from Barack Obama’s confirms that context matters. In the dueling aerial photos of the two presidents being inaugurated, Obama in 2009 and Trump in 2017, one shows the National Mall filled to overflowing, the other shows it with glaring open spaces — making clear how meaning is shaped by setting. This insight helps explain the significance of the second season of Amazon Prime’s series “The Man in the High Castle.” Compared to season one, the new season takes on unexpected meaning by virtue of its political context. When season one premiered in 2015, its narrative unfolded against the backdrop of the Obama administration and the unlikely candidacy of Donald Trump. Many critics (including this one) interpreted the show as offering an allegorical warning against the prospect of a fascist future. Now that the former candidate, Trump, has become president, season two can be interpreted as suggesting that fascism has arrived.

Appropriately enough, the new season focuses on whether ordinary people react by collaborating or by resisting. In its 10 streaming episodes, “The Man in the High Castle” explores in detail why people embrace or reject a given political system. In so doing, the show provides implicit lessons for all Americans — conservatives and liberals alike — about how to respond to the Trump administration.

Season one — for those only now tuning in – established the basic contours of the show’s plot. The year is 1962, the United States has lost the Second World War, and the country is divided into twin occupation zones run by Imperial Japan and Nazi Germany (there’s a “neutral zone” in the mountain west). The show’s main characters include craven collaborators (SS Obergruppenführer, John Smith), reluctant resisters (Juliana Crain and Frank Frink), and ambivalent bystanders (Japanese Trade representative, Nobusuke Tagomi). These and other characters all struggle to respond to the pressures of the fascist system as it threatens to careen out of control due to intensifying tensions between Germany and Japan. The holy grail sought by all parties is a trove of mysterious films possessed by “the man in the high castle” (the reclusive Hawthorne Abendsen), which seem to depict an alternate world in which the Nazis lose World War II. Season one ended by presenting viewers with the mind-blowing ontological question, “whose reality is really real?”

Season two begins — like our reality — with administrative turnover. Adolf Hitler dies and is replaced by a new Führer, the fanatical militarist, Martin Heusmann. Tensions soon increase as Heusmann unveils a plan to launch a surprise nuclear attack against Japan to assure Germany’s global dominance. The series chronicles how various characters – American, Japanese, and German — decide whether to collaborate with, or resist, the new order.

Plenty of Americans collaborate. Exhibit A is last season’s surprise show-stealer, John Smith, who reliably perpetrates various acts of malfeasance. This season, however, we are treated to a brief glimpse of his motivation: a haunting scene where he witnesses the nuclear destruction of Washington, D.C., from his bedroom window.

The suggestion is that Smith, like other Americans, decides to work with his country’s new masters for sheerly pragmatic reasons. By contrast, other Americans seem motivated by conformity. When Smith’s wife, Helen, convenes her suburban Long Island circle of Nazi ladies-who-lunch at her home, their hateful chatter — echoing the regime’s ideological hateful teachings on race and religion — appears to be more of a social lubricant and bonding mechanism than an expression of ideological conviction.

When Juliana Crain defects to the Reich and moves to Long Island, she is welcomed into Helen’s social circle. As Juliana becomes accepted by the Smith family, she has to remind herself that “you could almost forget they’re Nazis.” In offering this observation, “The Man in the High Castle” proposes the implicit warning — emphasized by many pundits today — that normalizing an aberrant political order can blunt the capacity for resistance.

Resistance is portrayed as less common than collaboration. Midway through season two, Juliana is coerced into joining the resistance and quickly realizes her exceptionality when a taxi driver meekly confesses, “I know I should do more — like you folks.” For many Americans, however, resistance is too psychologically difficult to consider. Juliana’s husband, Frank, makes this clear when, he explains to one of the cause’s leaders, Gary Connell, just before joining, “I put my head down for so long I forgot how to stand up.”

Frank’s change of heart is motivated by the desire for revenge. As the show’s main Jewish character, he yearns to pay back Kido, the Japanese chief inspector, for ordering the gassing of his Jewish relatives. In a dream scene, Frank is gathered with his family at a Passover Seder, reciting the Shehecheyanu, when his nephew asks who Pharaoh is. Replying, “A ruler and a tyrant,” Frank later vows to “bring a plague to the Pharaohs” by volunteering to lead a massive bombing of the Japanese occupation forces’ headquarters.

“The Man in the High Castle,” however, is careful not to glamorize the resistance. American attacks lead to savage German and Japanese reprisals against civilians, thereby raising the question of whether the resistance needlessly jeopardizes American lives. Juliana, moreover, exposes the dubious morality of the resistance movement’s unsavory methods. When she objects to the attempts of the resistance leader, George Dixon, to displace Obergruppenführer Smith by going after his teenage son, Thomas, she exclaims, “You are no better than the Nazis,” to which Dixon responds, “If we’re gonna beat them, we need to be worse.”

The show further deglamorizes the resistance by exposing its internal divisions. One point of tension is caused by disputes about which groups have suffered more. When Frank tells his Japanese American comrade, Sarah, that she doesn’t know “what it means to be treated like s—t every minute of every day because of what you look like,” she replies that she grew up during the war, in the Manzanar concentration camp. She adds, “It wasn’t that long ago that the white man called the shots.” Frank responds by saying, “Well, not this white man,” explaining that the law sees him as Jewish regardless of how he sees himself.

This tense exchange echoes recent debates within the Democratic Party about identity politics, and implies that all oppressed groups need to unite. Jews, in particular, should resist viewing their persecution by the Nazis as unique, and recognize its universal dimensions, so as to be able to forge productive alliances with other oppressed peoples. The complexity of resistance, finally, is revealed by the fact that some of the system’s leaders embrace it themselves. Smith resists his own regime’s principles when he refuses to surrender his son, Thomas, to the authorities after Thomas is diagnosed with muscular dystrophy. Smith goes so far as to murder his family’s physician, Dr. Adler, who plans to turn over the “defective” boy to the regime’s euthanasia program. Smith then concocts a risky plan to have Thomas disappear by sending him to Argentina on a fake Hitler Youth trip.

In depicting Smith embracing a Nazi version of the Kindertransport (used by German Jews to ship their own children to safety in the late 1930s), the series exposes how the loyalists of a given system have to rethink their principles when they unexpectedly affect them personally. (Conservatives reversing themselves on same-sex marriage after a family member comes out of the closet, anyone?).

“The Man in the High Castle” offers few moral certainties. By showing how members of both groups are capable of evil deeds, the show reveals how the fascist system compromises everyone, evoking Primo Levi’s contention, expressed in “The Drowned and the Saved,” that the Nazis’ diabolical evil was underscored by their ability to force the Jews into collaborating in their own destruction.

None of this will come as consolation for Americans seeking a playbook for how to resist the Trump administration. But there is one glimmer of hope.

Although it raises questions about collective resistance, “The Man in the High Castle” affirms that individuals retain the free will to act morally. This existentialist point is underscored by the show’s most inscrutable character, Hawthorne Abendsen, who collects films showing alternate worlds. As he explains to Juliana, each film “shows a reality like ours, but not ours.” In these films, he emphasizes, “some of us are just the same — rotten or kind in one reality, rotten or kind in the next — but most people are different depending on whether they… are safe or scared.” In other words, most people are affected by the conditions of their time, and they adjust their principles accordingly.

For her part, Juliana is the same in all worlds. A believer in humanity, she is blessed with a fixed moral compass and sees the good in all people, regardless of whether they are Nazis or resistors. Her behavior makes clear that we all have the power to reject deterministic schemes of history. As she declares, “Whatever happens, I don’t believe our fate is inevitable, we have to try.”

This is perhaps the main moral lesson of “The Man in the High Castle.” In exploring the perennial historical question of free will versus determinism, the series asks Americans to reflect: Was their political behavior in the recent election guided by their principles, or did they abandoned them in order adjust to new conditions? It further challenges them to decide how they will respond as the new American political order takes shape.

Gavriel Rosenfeld is the editor of the recently published anthology “What Ifs of Jewish History: From Abraham to Zionism” (Cambridge University Press, 2016).