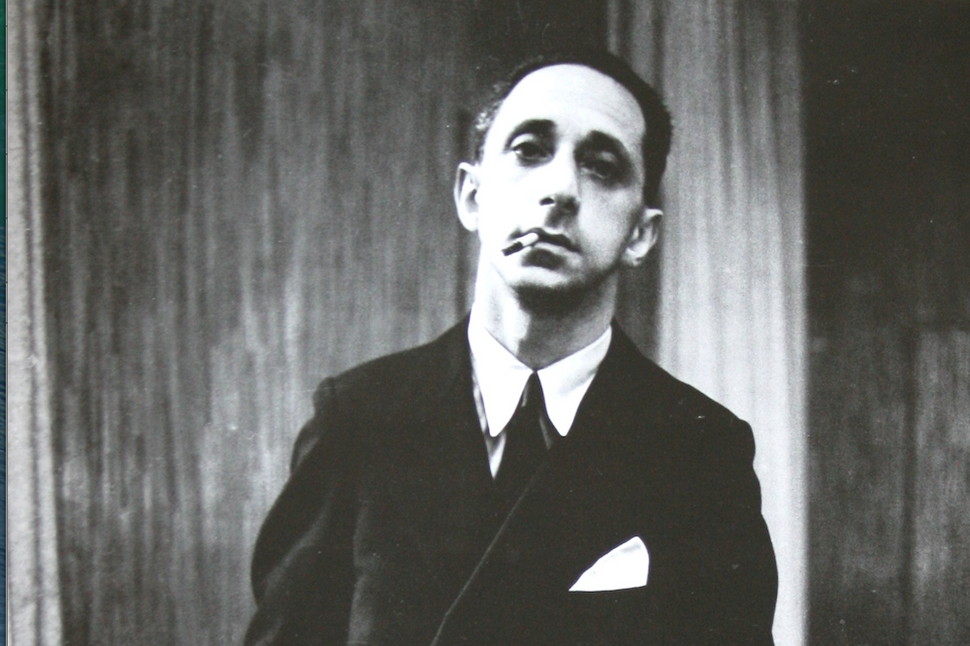 Had she known her cousin, Anne Frank might have rephrased a famous statement to read: “In spite of everything, I still believe that people are really chic at heart.” The French Jewish interior designer Jean-Michel Frank, despite a life of almost unrelieved tragedy — he committed suicide in 1941 at the age of 46 — managed to create elegant Spartan furniture made with rare materials that continues to attract admirers and collectors. Frank’s biographer, Maarten van Buuren, is professor of modern literature at the University of Utrecht, the Netherlands. An expert on Proust and Zola, his “A Place for the Soul” about Frank is out in German translation from Fischer Verlag with, it is to be hoped, an English language version to follow. Recently The Forward’s Benjamin Ivry spoke with Professor van Buuren about the talented, ultimately tragic cousin of Anne Frank.

Maarten van Buuren: No, probably not. He met and knew rather well her father Otto Frank, but after Otto moved the family to Amsterdam, contacts were fairly difficult between family members given the [historical] circumstances at the end of the 1930s. Jean-Michel was a little bit of a maverick in the sense that he was a homosexual and on drugs, and one family member told me that the rest of the family, while admiring what he had accomplished, they surely kept the children away from this strange uncle.

In a memoir, the designer Elsa Schiaparelli claims that Frank “invented a new style of furniture combining simplicity with considerable luxury. He was small in stature and had a terrific and desperate inferiority complex, but limitless wit.” Was his inferiority complex worsened by anti-Semitism or homophobia?

It was neither, I think. Both of his brilliant elder brothers died [in World War I], talented lawyers and artists who would have followed Jean-Michel’s father as banking directors. From the beginning, Jean-Michel was the frail younger brother, like a little bird that fell out of the nest. He was a very ill person, in contrast to his sturdy brothers. And then on top of that, both of his brothers died within a month, and his father killed himself a few months after that, leaving Jean-Michel with an inferiority complex. On top of being the small brother who could not achieve what his brothers had, he had the guilt of being the only one left in the family. He never, ever had a problem with being a homosexual.

Frank’s spare esthetic, using rare or unexpected materials in Spartan and sometimes severe ways — such as an oak and doeskin armchair or a gypsum and patinated bronze cabinet — was inspired by the Chilean patron Eugenia Errázuriz. She linked design with morality to the point of eventually taking religious instruction in the Catholic Church. Had he survived the war, might Frank have been drawn to rabbinical studies or other spirituality?

No, there is no single sign that points in that direction. I wouldn’t exactly characterize Errázuriz as Spartan, or else only as a very particular Spartan. She had this ideal of design simplicity that appealed largely to Jean-Michel, but she also decorated her homes with paintings by Picasso, and all the sparse furniture she had cost very much money. Having some ideals in the artistic field that may be associated with some monastic order does not imply she was a Spartan person; she wasn’t.

The art historian Joanna Merwood-Salisbury suggests that unlike heroic modernists who used spare designs in futuristic ways, Frank lacked heroic rhetoric because as a “Jewish homosexual disabled since birth, he presented a tragic alternative to the physically fit and sexually unambiguous universal inhabitant imagined for modem architecture.” Do you agree?

Ooof. I think that there is a confusion here of heroism with austerity which comes from Jean-Michel’s way of designing interiors and his artistic taste. It’s modernist but it’s not the same austerity as Le Corbusier has. The austerity of Jean-Michel is one with a very expensive and distinguished atmosphere, whereas Le Corbusier had more popular ideals to serve the people, where they could live cheaply. This was not at all the ideal of Jean-Michel.

In 2008, the critic Jed Perl claimed that Frank designed “passive environments — rooms awaiting occupants; but their passivity had an air of aggression, or terror, about it. There was something disquieting about the lack of adornment.”

On the contrary. This is inverting the effect that Jean-Michel was looking for. I am deeply convinced that the ideal of all his design work was to create a space where the soul could go to rest. It’s a meditative atmosphere he was looking for. Like a dog in his basket. So the sparseness and exquisite materials he used were to give people something comparable to monastic spaces designed to take away daily sorrows and give space to your soul. Not at all disquieting. All his life he was trying to escape to a space where his soul could be put to rest. He invites his clients to accommodate their spirits to the spaces he creates.

A painting important for Frank was “The Judgement of Cambyses” diptych in Bruges by Gerard David showing a corrupt ancient judge who is flayed alive. Did Frank identify with this image as a metaphor for what the French call an écorché vif, a sensitive person whose protective outer coating of skin is missing?

Exactly. In the 1930s [Jean-Michel] visited Belgium and the Netherlands and found a postcard which he sent to Giacometti. That gives you a resume of his whole life, that Jean-Michel was actually an écorché vif.

In 1940, Frank escaped Fascist Europe in the company of his American friend William Thaddeus Lovett, saved by Aristides de Sousa Mendes, Portuguese consul in Bordeaux, who issued thousands of exit visas to refugees. Among those also fleeing was the artist Salvador Dalí, who wrote to a mutual friend in 1935 that the suicide of the poet René Crevel so distressed Frank that Dalí stated, “I fear for [Frank’s] life.” If Dalí, of all people, was worried about Frank’s mental health, things must have been really bad. How did Frank manage such original artistic achievements, despite bouts of opium and cocaine abuse and nervous depression?

Exactly. That is the big question that hovers above my book, and is one of the reasons that incited me to write the book. Where did he get his genius in designing interiors? He never was trained in that profession, yet he appears and at one time he was the biggest designer. All the years through, living the life that he did. He used tons of cocaine and heroin in Italy while also doing very important commissions. I don’t understand where he found the stamina.

Previous writers claimed that Frank jumped out of a window of his apartment on East 63rd Street, but you establish that he died in bed of a barbiturate overdose, leaving a suicide note claiming to be ill, and asking his friends to forgive him. Given his family tragedies, was this inevitable, or were pressures as an exile adding extra stress?

It is, in a sense, a very big question, because there he was at the summit of his celebrity, being celebrated in New York with important commissions and also in South America. I think you have to read his [suicide] note as a message to his friends not to feel guilty, thanking them for having helped him all their lives. But it hides the real reason I think [Jean-Michel] killed himself, which was the enormous burden of tragedy he had gathered all his life, the deaths of his brothers and father and the breakdown of his mother, and having been thrown out of another country once again. That was too much. So the question would be how could a person keep going as long as he did. At a certain moment it was too much, and in a sense, fate overwhelmed him. I have an impression he was running, running, running, and doing everything he could do to not be taken over by destiny. Then one moment there it was, and destiny took him in. There was a massive denial of the big tragedies in his life. That was a reason he never went in for psychiatric treatment, although he would have been a perfect case for treatment. He was in perfect denial of all the things that destroyed him.