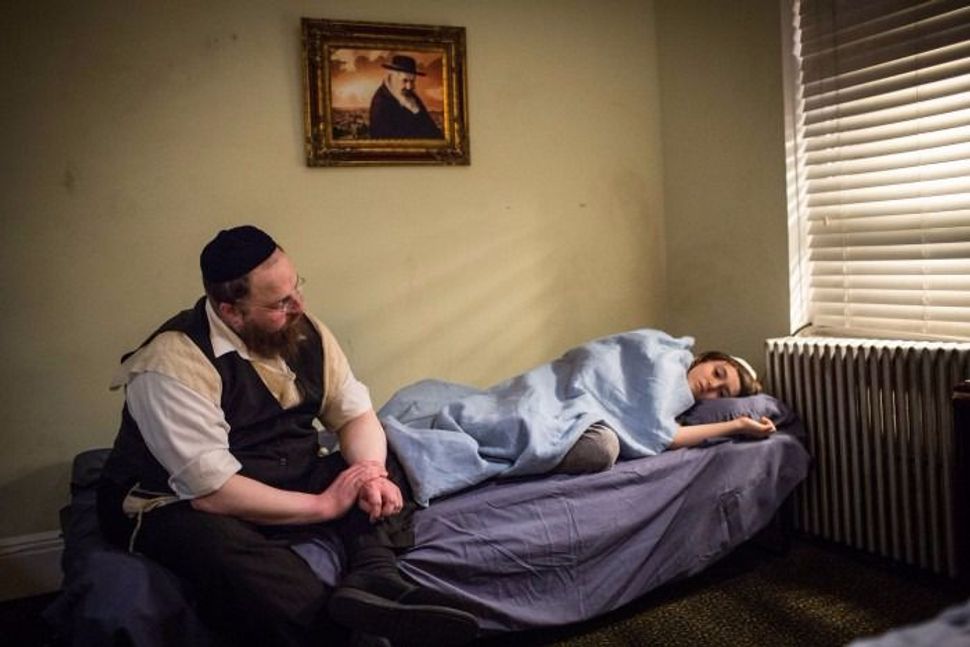 A meditative documentary about Samuel Bickels, a polyglot costume drama about Karl Marx and a star-studded André Aciman adaptation are among the films to watch for at this year’s Berlin International Film Festival, which kicked off on Thursday with the warmly received “Django,” a biopic about the legendary Gypsy Jazz guitarist Django Reinhardt. When the Berlinale slows to a finish on Sunday, over 400 films will have been screened in what is Europe’s largest film festival, an orgiastic celebration of world cinema that is as gloriously messy as the city that gave birth to it.

With no Israeli films and a single Jewish director in the main competition slate, the tribal flavor of this festival is somewhat more difficult to discern than in previous years: trickier, say, than 2014, when Wes Anderson’s Stefan Zweig homage “The Grand Budapest Hotel” opened the festival on a giddy high note; or last year, when a surprisingly successful German-language “Diary of Anne Frank” defied the odds to become one of that festival’s very best films; or any installment when perennial favorite Tomer Heymann turns his navel-gazing camera on himself, his friends or family members.

Even without such contributions, this year’s Berlinale features a number of Jewish milestones, including the festival’s first-ever Yiddish-language entry, the Borough Park melodrama “Menashe,” a surprisingly authentic and sensitive peak inside the Hasidic world – and tarring a real-life Skver Hasid – by first-time feature director Joshua Z. Weinstein. 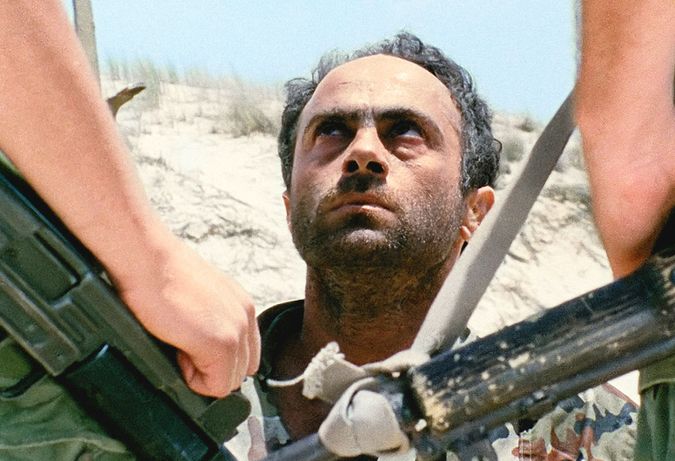 Another first for the Berlinale is the gala screening of an Israeli film as part of the festival’s selection of restored classic films. Alongside “Annie Hall,” “Terminator 2: Judgment Day” and “Night of the Living Dead,” the Berlinale will screen a restored version of “Avanti Popolo,” Rafael Bukaee’s 1986 anti-war tragicomedy. The past two decades have seen a flowering of Israeli auteur cinema, with filmmakers like Amos Gitai, Eran Kolirin, Ari Folman and Joseph Cedar cropping up regularly at the world’s major festivals. Bukaee, who died in 2003 at the age of 47, was a rare pioneer, committed to revitalizing Israeli cinema during a time when the country didn’t have much of a defined film culture of its own. Although he only directed three feature films, Bukai has a claim to being the most influential Israeli filmmaker of the 1980s, largely on the basis of “Avanti Popolo” filmed on a shoestring budget with a cast and crew of volunteers. In the aftermath of the First Lebanon War, Bukai turned his ironic gaze on Israeli’s greatest moment of victory, writing and directing a story from the point of view of the two Egyptian soldiers stranded in the Sinai desert following their defeat. When it was submitted to the Locarno Film Festival, this absurdist anti-war satire unexpectedly won the Golden Leopard’s Eye, one of the festival’s top prizes. Overnight, Israel became a major player in world cinema. To this day, many consider “Avanti Popolo,” shot largely in Arabic using Arab actors, the best Israeli film ever made. Bukai’s follow up feature, “Marco Polo, the Last Chapter,” released a decade later, was a big-budget flop. In his last decade, Bukai found greater success as a producer, supporting a new generation of Israeli directors, like Assi Dayan, whose “Life According to Agfa” was Israeli’s Foreign Film Oscar entry in 1993 and Gidi Dar, whose “Ushpizin” was one of Israeli’s biggest hits in 2004, a year after Bukai’s death.

Last year’s Berlinale showcased a number of fine Israeli features, including Elite Zexer’s heartbreaking Bedouin drama “Sand Storm.” Udi Aloni’s coexistence rap musical “Junction 48” and Heymann’s touching AIDS documentary “Who’s Gonna Love Me Now” both won Panorama Audience Awards, a “best in category” prize given by popular vote. The contemporary face of Israeli cinema is represented this year with a single feature-length production, Daniel Mann’s debut “Low Tide,” to screen in Panorama, the Berlinale’s second main slab. The American-born Mann conjures up the absurdity of everyday life in a country where violence is omnipresent and states of emergency are shockingly routine through the story of an army reservist who fails to report for training. The other high-profile Israeli item thi year is an intriguing film installation from Amos Gitai, “The Law of the Pursuer,” which appears to be an outgrowth of his investigation into the Rabin assassination undertaken for his 2015 Venice Film Festival entry, “Rabin, The Last Day.” Featuring unreleased research material and film footage from Gitai’s archive and collected over the course of the last twenty years, the video installation is on view at SAVVY Contemporary, a gallery in the northern district of Wedding, through the end of the festival.

Neither of the two Israeli-themed documentaries this year’s are by Israeli filmmakers. In Raed Andoni’s “Ghost Hunting,” a co-production from Palestine, France, Switzerland and Qatar, former Palestinian prisoners reenact their experiences in Israeli detention centers as a sort of trauma therapy. The set up is reminiscent of Shlomi Elkabetz’s sanctimonious pseudo-documentary “Edut” (“Testimony”), which premiered at the 2011 Venice Film Festival and featured accounts of brutality against Palestinians in the Occupied Territories, read by Israelis actors. One has higher hopes for Andoni’s film, in which Palestinians reenact their own harrowing experiences at Israel’s main interrogation center, Al-Moskobiya, the facility where the director himself was jailed at 18. The film arrives with a seal of approval from Ken Loach, the legendary English director (and most recent Palme d’Or recipient), who calls it “a daring and shocking film, made with fine cinematic judgment.”

“Bickels (Socialism)” is one of four “Streetscape” films by the German polymath Heinz Emigholz that are screening at this festival. The mostly dialogue-free documentary is a meditative architectural travelogue, largely through the Israeli north, and named for Samuel Bickels, the influential architect of numerous kibbutzim and museums. Emigholz’s deliberate, sensitive style can be hypnotic or soporific, depending on your point of view.

Getting back to fiction films, two titles to watch for are Luca Guadagnino’s adaptation of André Aciman’s novel “Call Me by Your Name” and Raoul Peck’s costume drama “The Young Karl Marx.” Guadagnino, the Italian director behind the super-stylish “I Am Love” and “A Bigger Splash,” co-wrote the screenplay (along with James Ivory) for this version of Aciman’s autobiographical bestseller, about a summer love affair between two precious Jewish-American boys in Italy in the late 1980s. The film was glowingly received at Sundance last month; it should find an appreciative audience in Berlin, where it will be in the running the coveted Teddy Award for best gay-themed film. It remains to be seen whether the Karl Marx biopic deals with its subject’s Jewishness – admittedly a very ambivalent issue for the theorist. If nothing else, the Haitian director’s dramatization of Marx’s fateful meeting with a factory owner’s son named Friedrich Engels should be notable for its linguistic accuracy: The French-German-Belgium coproduction is in all three languages of its protagonists, French, German and English.

There is nothing remotely Jewish about Oren Moverman’s dysfunctional family thriller / drama “The Dinner.” The Israeli-born director, whose first feature “The Messenger” took home the screenplay award at the 2009 Berlinale, is the lone Jewish director with a film in competition this year. His twisted, star-studded mess of a film (Richard Gere, Steve Coogan, Rachel Hall and Laura Linney) is about two sets of parents who meet to civilly discuss their problem children. Sound familiar? Another, better director trod similar territory not too long ago with infinitely better results. That director was Roman Polanski and the film, confined to a single Brooklyn living room, was “Carnage,” an over-the-top exposition of superlative performances from John C. Reilly, Jodie Foster, Kate Winslet and Christoph Waltz. It’s been a while since we’ve seen so much pure acting at this or any festival.

A.J. Goldmann is a freelance culture writer based in Berlin.