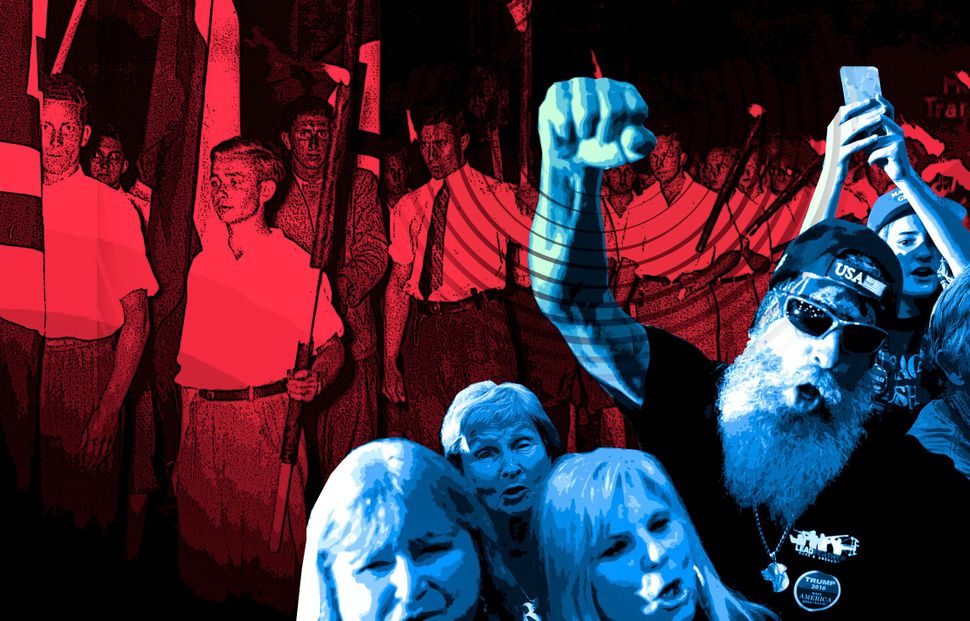 ‘It is a disgrace which gets worse with every day that passes,” one observer wrote of the deteriorating political scene we know all too well. “Politics everywhere and everywhere the terrorism of the Right…. It is astounding how easily everything collapses.” He added, “It is shocking how day after day naked acts of violence, breaches of law, barbaric opinions appear quite undisguised as official decree. Each new decree, he said, was “more shameful than the previous one….. The Liberals tremble.” And finally: “I for my part will never again have faith in Germany.” Thus wrote Victor Klemperer, a Jewish German scholar, in the first months of Hitler’s ascension. Historians have spent decades examining how Germany, an allegedly rational and highly cultured society, became unhinged. Future historians will no doubt be examining how America, the paragon of liberty, became unhinged. The simple answers are, respectively, Adolf Hitler and his acolytes, and Donald Trump and his parade of right-wing enablers, from the FBI to border patrol agents to white nationalists to plutocrats. But there are deeper answers, and they are far more frightening, with far-wider implications than the one-man theory.

They are answers that we Jews understand.

Of course, Jews don’t have to be told to be suspicious of analogies to Nazi Germany. We know they are usually facile, overwrought and wrong-headed, and that they can trivialize the greatest tragedy in the history of humankind. America is not Nazi Germany, Trump is not Hitler.

We are not headed for the genocide of refugees, only for their ban or deportation, to protect us, Trump says, from possible saboteurs, even if that echoes Hitler’s “indignant denial,” according to Klemperer, that he was accusing all Jews of threatening the state: “No harm will come to loyal Jews.” And however much the language of “round up” and “deportation” has a terrifyingly reminiscent ring for Jews, Trump has no real interest in political power or programs, only in personal adulation. He is our panderer-in-chief.

Still, one shouldn’t deny that there are situations in which historical antecedents can be instructive, not because, in this case, Trump is analogous to Hitler, but because the underlying political dynamics of Trumpism to those of Hitlerism may be so. Unfortunately, we Jews know an awful lot, too much, about unhinged societies.

We understand cause and effect, which is why Klemperer’s diaries, published as “I Will Bear Witness,” and Harvard scholar Daniel Jonah Goldhagen’s now-famous analysis of grassroots Nazism, “Hitler’s Willing Executioners,” ought to be required reading in America now. Because whether or not Trumpism is a latter-day incarnation of Hitlerism, both are predicated on something similar, something we would rather not face, but something that is important to discuss, especially as Jews, as Trumpism barrels forward: Hitler and Trump are not the causes of a national movement of hatred; they are its beneficiaries.

So how did Germany become unhinged? According to Goldhagen’s analysis, it wasn’t all that “hinged” to begin with. If you think, he says, of political life as a national conversation, then one of the primary subjects of that conversation in Germany, hundreds of years before Hitler rose to power, was anti-Semitism. And just about every German participated in the dialogue. As one woman in the oral history, “What We Knew,” put it, “There was never any particular sympathy for the Jews,” which, of course, is putting it lightly. This was the sentiment that Hitler exploited.

Goldhagen believes that for all the theorizing about human nature, and the postulation that what happened in Germany could happen anywhere, even America, the position is false because most countries didn’t have that conversation, and anti-Semitism wasn’t baked into the populace for hundreds of years, as it was in Germany. Indeed, he says, America’s political conversation has largely been about our democratic values, which insulated us from the worst excesses of human nature.

But Goldhagen was writing 20 years before anyone could possibly conceive of someone like Trump becoming president of the United States. And Goldhagen missed something — namely, that there had long been another conversation in America alongside the democratic one. This second conversation, more sotto voce, took place wherever white resentment brewed: in the South, of course, in parts of the Far West, in white rural enclaves, and later in white suburbs. Americans knew it existed. Everyone knew there was smoldering hostility toward those who threatened the prevailing social order: blacks, Hispanics, the LQBT community, Jews and, more recently, Muslims. You couldn’t miss it. But the democratic conversation drowned out this second conversation, so it never became the conversation. By and large, we stayed hinged.

But if no one could have predicted the rise of Trump, many, I think, could have predicted the recrudescence of intolerance and hate, especially as white Americans felt increasingly dispossessed by cultural change. The modern conservative movement, which rose from the “nut right” groups like The John Birch Society, gave intolerance an intellectual patina under the intellectual guise of Burkean tradition.

The modern Republican Party, which rose from modern conservatism, gave intolerance political cover. Republicans may have been embarrassed by Trump’s bad manners, but they have eagerly lined up behind him, just as German conservatives who eschewed Hitler wound up embracing him in a bear hug. They are, to borrow Goldhagen’s chilling term, Trump’s “willing executioners.”

Obviously, the Republican Party as an institution is impervious to criticism that it is an engine of bigotry. No one in the mainstream media can make that charge without taking withering blowback. But what is both astonishing and saddening is that the right-wing media — Fox News, The Drudge Report, Breitbart and numerous other right-wing websites, and right-wing talk radio, especially Rush Limbaugh — have attracted so little mainstream opposition over the years, even as they were collaborating with the GOP to change and debase the American conversation. (Limbaugh even sat beside Tom Brokaw on NBC’s Election Night coverage in 2000 as if he were just another commentator.)

It is not an exaggeration, I think, to compare Limbaugh’s rants to those of Goebbels or Streicher or Rosenberg or Esser. Like them, he didn’t just coarsen the national debate; he effectively destroyed it. And just as those Nazi propagandists paved the way for Hitler, Limbaugh paved the way for Trump. He took white grievance and cranked it up to deafening volume, which accelerated the process of hate: 500 years in Germany, 50 in the United States. Thus the conversation changed.

The great fiction of the 2016 election, and arguably the most potent force in normalizing Trump’s presidency, is that Trump’s was a victory of economically distressed white Americans, particularly in the Rust Belt. Hate had nothing to do with it. Indeed, you read J. D. Vance’s best-seller,” Hillbilly Elegy,” about his white Appalachian family and their grievances, and you are supposed to feel not their bigotry but their economic and social distress, which is why even liberals loved the book —a love I found willfully blind as well as condescending.

But consider this: “Hillbilly Elegy” probably could have been written about resentful Bavarians in the late 1920s, and I doubt anyone would be getting all teary-eyed about that elegy. Yes, those Germans were economically distressed — seriously so. And they felt culturally at sea in Weimar. But they were also, as we Jews know all too well, vicious anti-Semites.

And this is why Trump’s election is such a calamity — not because of what he promises to do, bad as that may be, but because of what and whom he represents. It is important to stress that Trump wasn’t elected by anything near a majority, or primarily because of economic disaffection, though that has become a favorite talking point of the media and the political classes. Hillary Clinton actually won voters whose income was less than $30,000 a year — that is, the poorest voters, the ones who suffer the most from the economy, 53% –41%. She even won those whose incomes were between $30,000 and $50,000 by 51%–42%.

Where Trump crushed her was among whites generally and among Republicans, from which it is fair to conclude that these voted not their economic suffering, but their bitterness and even their hatreds. This isn’t to say that general discontent — a sense of social, cultural and even economic dispossession — didn’t feed the hatreds. They clearly did and do. Nor is it to say that cultural dislocation isn’t real; this election was, if anything, a white cultural insurrection in which discontent led to blame, and blame led to hate. It is to say that dispossession and difficulty, whether in Germany or in the United States, don’t justify hatred.

Jews know. This is no longer just about Trump or even about the craven Republicans who enable him. This is about millions of Americans who think and hate as he does. They may feel vindicated by his election. They may feel empowered. But we must make certain that they never feel absolved. One of the first things Hitler did was expunge German war guilt. Guiltlessness was a pathway to what followed. We need to make the haters feel their guilt. That should be one of the missions of all decent Americans, but especially of Jews who have suffered so grievously from the alternative. Jews must recalibrate the American moral compass, because no one else may be able to.