Could a Few Good Short Stories Save The Trump Presidency? 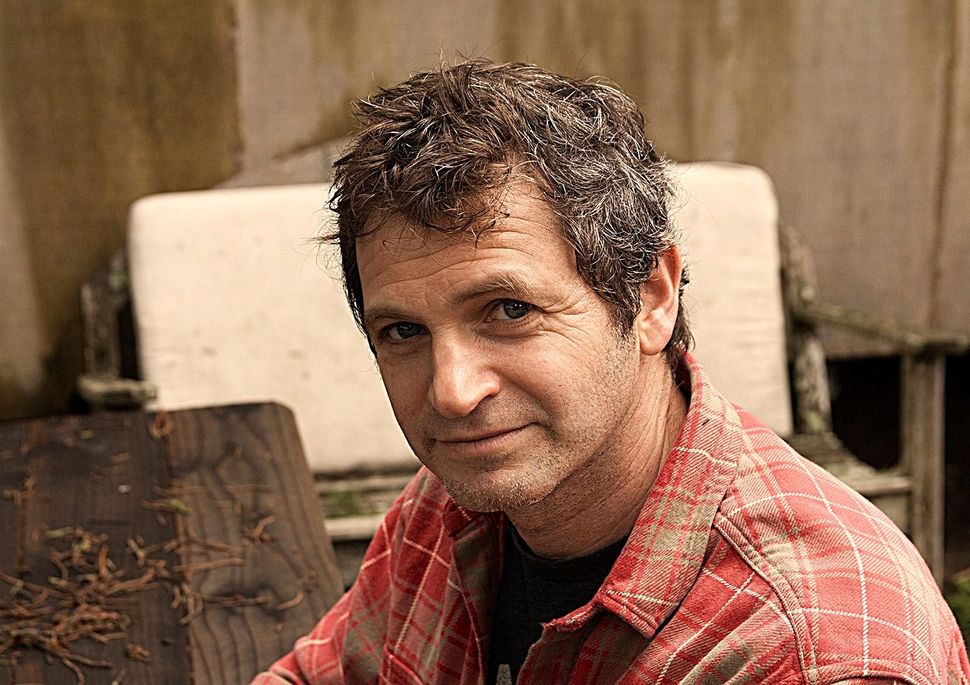 In Peter Orner’s new book, “Am I Alone Here? Notes on Living To Read and Reading To Live,” he admits that he reads in taquerias, at traffic lights and “in part, to get away from email.” Illustrated by the cartoonist Eric Orner, the author’s brother, the unusual and deeply personal book is being passed hand-to-hand among literary writers — and it was just named a finalist for the National Book Critics Circle Award in criticism.

In one memorable scene, Orner is disappointed by a sentence by Julian Barnes — a writer who has received a lot of love from the world. The sentence feels too easy, too unbelievable. Orner happens to be reading at a traffic light — he reveals that he always keeps a book under the seat — and he tosses the novel out the window. A well-dressed woman picks it up, with style.

I asked Orner, the author of two novels and two story collections, how to read in the age of Donald Trump, why Isaac Babel matters so much, and other questions about the connection between literature and survival.

Aviya Kushner: There is a haunting passage in your essay on Isaac Babel that seems especially contemporary in our post-election world. “If Stalin, a mediocre poet himself (beware militaristic, mediocre poets with power) had read a little Isaac Babel,” you write, “he might have experienced the shock of humanity. Would he have closed the gulags? Literature has never had much success interfering with the actual machinery of tyranny. Still, I hold tight to the belief that stories can, and do, stick it to authority like almost nothing else.” What are some of your favorite moments, in literature, of people reacting to inhumanity?

Peter Orner: Maybe great literature is by its very nature a reaction to inhumanity. Take Gogol, for instance, an influence, of course, on Isaac Babel himself. Gogol wrote “The Overcoat”, a devastatingly humane and – devastatingly funny – reaction to inhumanity. The story is like a monument to the rebellion of a little guy raising voice to the face of a society that always, at every turn, seeks to smack him down. When the little clerk’s ghost haunts the powerful people on the bridge at the end I always want to cheer. And Isaac Babel, one of Gogol’s finest predecessors, carries on this rebellion. In Babel, a reader is constantly reminded of what people who have power do to those who don’t. I think, in particular, of the final moments of “The Rabbi’s Son.” The rabbi’s son has disavowed the world of his parents to join the army of Lenin and Trotsky, has been wounded in action. This son still, in spite of all the violence and all the degradation against the poor, and Jews in particular, is a true believer in the Soviet cause. He famously tells Babel’s narrator: “In a revolution a mother’s an episode.” When he dies, Babel’s narrator, who is torn between loyalty to his own Jewish culture and the dawning new world order says: “We buried him at some forgotten station. And I, who can scarce contain the tempests of my imagination within this age-old body of mine, I was there beside my brother when he breathed his last.” Seems to me his grief here is a confused response to the inhumanity raging everywhere around him. And this is key: our response to inhumanity need not even be articulate, we just have to react, to feel some human kinship, that’s what great literature demands.

How do you manage to read stories with all the drama in American political life right now?

Even Donald Trump won’t stop me from my daily dose of short stories. But Christ, if he happened to follow my lead and read one — say by an immigrant writer born in Mexico, for instance, would he suddenly change and disavow his f—king wall? If he read a little David Grossman or Amos Oz, would he refrain from appointing a guy with an extreme right-wing agenda ambassador to Israel? I think not. But I’m not sure Trump has any ability to read with an open heart. That would require some interest in standing in someone else’s shoes, which is what reading fiction is about. But it’s imperative, perhaps now more than ever in recent memory, to retain our humanity through reading — among other things — even if our current president has no interest. I’ve got to keep at least a little faith, I got two little kids.

I was moved to read your contention that the writer closest to Babel is Zora Neale Hurston. When did you start thinking of these two writers together? What connects them in your mind?

I was reading Hurston’s “Their Eyes Were Watching God” and there was something about the beautiful ease of telling — not to mention her exuberant celebration of the underdog and the utterly dispossessed that put in mind of Babel. And I do get annoyed when writers are ghettoized, clustered together. I think writers speak to each other across years, across continents, even when they haven’t necessarily read each other’s work. Babel and Hurston were rough contemporaries, and there’s no indication that they had any opportunity to read each other but to me this doesn’t mean they aren’t kin. They both understood that the best stories come only by listening to so-called ordinary people and keeping your eyes wide open..

I loved your meditation on Babel translations. Like our shared teacher, James Alan McPherson, the Pulitzer Prize-winning story writer who had a visceral connection to Babel and taught his books often — and who famously saw parallels between Babel’s Odessa and his own Savannah, Georgia — you prefer an older Babel, translated from the Russian by Walter Morrison, the one with an introduction by Lionel Trilling. Why is that edition your favorite?

There it is right there. James Alan McPherson (bless his soul, we lost him last year), an American writer from Savannah, Georgia, a black man raised in the Jim Crow south, and who does he look to for solace? A Russian story writer, a Jew, murdered in the thirties. My grandmother used to say: What hurts you, hurts you. Same might be said for what speaks to us. I’m with McPherson on the Morrison translation. I prefer the Morrison primarily because it was the first one I was exposed to, and it’s hard to over-estimate the impact the book had on me when I first encountered it. So I’ll always be grateful to Walter Morrison, whoever he was, for giving me these majestic, and yet so concise stories in English. The cadence of Babel’s sentences comes across, in Morrison’s rendition, so seemingly spontaneously. “The orange sun rolled down the sky like a lopped off head…” Babel wrote it but Morrison turned it into English, and for that I consider him a genius.

But here’s the thing, to echo something Roberto Bolaño once said, you want to know how good a writer is? Read them in an imperfect translation, which is what all translations are. And Bolaño would say, the more imperfect the better. Because a good writer can survive even this.

And now, I probably should tell readers that you wrote me to say you had changed your mind on Babel. “That is one essay I knew I’d feel different about down the line,” you wrote. “He changes each and every time.” What are you thinking about him now? And could your new take possibly be related to translator Peter Constantine’s observation about how Babel’s style changes from story to story?

I’d say it is because each time I re-read a Babel story, I re-experience it. His stories are never dead on the page, no matter how often I re-read. They are alive, and so I see them visualize them in my mind differently, each time I re-read. Not quite sure that it is so much that his style changes – though always in a few pages he has such a range – as it is the fact that his characters are so alive. It’s like they are capable – again seemingly – of a certain spontaneity. Anything could still happen, even though I’ve read the story before. That’s Babel. I feel the same way about Alice Munro and Bernard Malamud, Leonard Michaels, Juan Rulfo, Eudora Welty. Each time I re-read their stories, the life in them becomes set in motion and anything I thought before goes out the window.

Whether you are writing about Babel, Hurston or some other master, this book is in many ways a love letter to rereading. What can rereading a great book do that a first read cannot?

Maybe it’s like the difference from love at first sight to the day-to-day love that gets us through life?

Another pleasure of “Am I Alone Here?” is its quiet rebellion against “marketing-copy” descriptions of books, as well as “book-club” titles that simplify humanity instead of complicating it. You make a case for Yoel Hoffman, the Israeli writer who certainly isn’t tearing up the book-club circuit, and whose most recent book, “Moods,” was translated by Peter Cole, winner of a MacArthur Fellowship for his translations of medieval Hebrew poetry. What do you love about Hoffman? How is the real Hoffman different from how he is neatly described in catalog copy?

Can I say these are my favorite questions ever? That I can completely geek out. Hoffman is often described as Israeli’s leading experimental writer. But what does this even mean? What does this tell us? Not much. To my mind, all great writing is, to some degree, experimental. “Moby Dick” is wildly experimental. “A Hundred Years of Solitude” is experimental. To Hoffman everything is holy — especially the ordinary. But he’s not high and mighty about it. Like few writers alive, Hoffman can make me look down at my shoelaces and think, holy f—k, isn’t a miracle I even exist? He reminds you not to take life so seriously– and at the same remind you that every second you waste brings you all that much closer to the end of it..

Throughout this book, you champion many under-read or entirely obscure books. Give us five titles — from any era or language — that you hope people will look up, if only, as you say, to read as an escape from email.

Could a Few Good Short Stories Save The Trump Presidency?