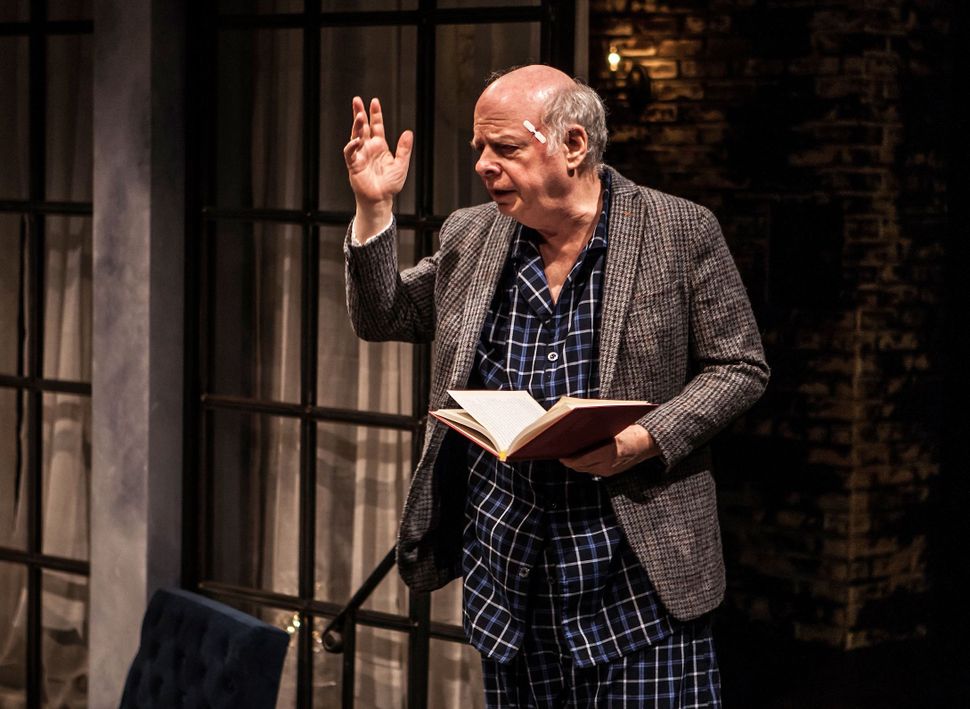 It starts, as so many cultural events in New York do, with the invited guests milling around a tastefully decorated space, plucking canapés from trays held aloft by caterers, and eyeing each other as they wait for the speeches to begin — the pitches and thank you’s and asks for money. Looking around at the other guests, one recognizes that this is a certain kind of crowd — the right kind of crowd, they might be famous, or famous among the set that matters, not the stars but the serious artistes behind the stars. In any case, everyone looks vaguely familiar. You might have met them once at a Paris Review party or a benefit for the Wooster Group. You feel, if you don’t know them, that you should. And look, there’s Matthew Broderick, stiff and awkward in the corner. And there’s Wallace Shawn, avuncular as always, though oddly dressed in plaid pajamas and a suit coat.

You feel lucky to belong, but also weary, because after all these years, your illusions about the glamour of New York society, even in its artsy downtown form, have been replaced by a deep knowledge of the hard work required to maintain a foothold in said society, which means, of course, that you deserve to be here.

You’re one of them now. They are you.

That the canapés consist of marshmallows and gummy worms and the caterers are stage hands and the invited guests are an audience gathered to watch Shawn’s new play “Evening At The Talk House” in a theater, not a ballroom or banquet space or the living room of a generous patron of the arts, only heightens the self-consciousness of the experience.

A bell tinkles. Someone — oh, look, it’s John Epperson, Lypsinka herself, playing it straight(er) in an elegantly cut jacket and tie — sits at the piano in the corner. Is that Debussy he’s playing?

People have taken their seats now, some in the sofas and armchairs assembled on the stage, some on the raked risers on either side.

Broderick stands and grimaces. He’s still stiff and awkward. In the halting, overly-self-aware manner that everyone in the audience, including you, recognizes from “Aunt Dan and Lemon” and “The Fever” and “The Designated Mourner” and most every other Wallace Shawn play we’ve ever seen, he tells us about the particular circumstances that led him, on this particular evening, to make his way to this particular place. A man named Ted — Epperson waves to the crowd — invited him here, and by here, Broderick now means The Talk House, an “almost-legendary, wonderfully quiet and genteel club, known far and wide at one time for its delicious and generously-sized snacks,” to commemorate the tenth anniversary of the opening of his (Broderick’s, though now Broderick’s name has become Robert) play “Midnight in a Clearing with Moon and Stars,” a play that hadn’t been all that well received but still after all these years held an important and meaningful place in the hearts of the people who’d been involved in the production.

As Broderick-now-Robert relates all this to us, describing the play he’d written and the virtuous ideals it had been meant to embody, telling us about the cast and crew, Annette (Claudia Shear), the costume designer, Bill (Michael Tucker) the producer, Tom (Larry Pine), each of whom waves in turn from his or her seat on the stage, and explaining the role The Talk House, and especially its accommodating matron Nellie (Jill Eikenberry), now bringing in snacks, and waitress Jane (Annapurna Sriram), tagging behind her, played in helping these artistes form their sentimental bonds, a series of ever-so-subtle transformations take place. The house lights slowly dim. The actors on the stage — Broderick among them — are replaced in our minds by the characters they’re playing. The atmosphere of a slightly formal social gathering of 100 or so artists and intellectuals has altered: By the time we’re introduced to Dick (played by Wallace Shawn himself), a washed up actor who wasn’t part of the production, who’s not only probably drunk but also covered in bruises and cuts from recently having been beaten up, and who, in Robert’s opinion, shouldn’t be here at all, we’re now no longer focused on each other but instead on the fictional world that has opened up between us. The Talk House. These people, Bill and Tom and Annette and Nellie and Jane and Dick, and all the things Robert has to say about them.

Robert’s monologue slides into a conversation with Dick. The room is dark now. The play proper has begun. From this moment on to the end of the play, we in the audience will watch the events of the evening roll out in real time. A chamber piece. Characters entering and exiting. Mimetic lived behavior. One long extended scene.

The bulk of “Evening At The Talk House” unfolds like something out of Chekov. Dramatic action is submerged in lived behavior. We’re asked to witness the characters going about their lives. The plot develops slowly, through conversation and our gradually deepening understanding of the personalities in the room and their motivations.

So, one wonders: why the elaborate setup? Why do Shawn and his director Scott Elliott work so hard to blur the lines between what’s happening on stage and the lives you and I and everyone else in the audience have brought with us into the theater?

To answer these questions it might be helpful to note that for much of the play the conversations transpiring on stage consist of the kind of rarified shoptalk that most members of the audience have spent many hours engaging in themselves. The characters gossip about their fellow theater artists, what’s become of them, what they’ve heard of their fortunes. They bicker about their own careers, playing down their successes, holding tight to their resentments. They mourn the old times when the theater mattered and the people involved in it seemed somehow more vital than everyone else. We may have just left a conversation of this sort to come see this very show. If we ran into someone we knew here, we may have talked like this in this very space.

We are them. They are us.

Shawn and Elliott know this. They understand exactly who the audience for a Wallace Shawn play is. They don’t want us to forget how similar our lives are to the lives of the characters on stage.

And as the play progresses and the talk turns to politics, more differences and convergences between our world and that of “Evening at the Talk House” become apparent. There’s been a troubling recent election. There’s a sense that we’re all on edge, that something real and important has come to an end and a frightening uncertainty now governs our lives. This is, again, not quite the world we left when we entered the theater, but it’s close enough, and we engage in a game of compare and contrast, finding real world proxies for the fictional political situation the characters have such strong and righteous feelings about.

Talk turns to the subject of “targeting” — a means of making money by combing through lists of people and choosing who should die — that some of the harder-luck characters have been performing to supplement their income. It’s all very simple and bureaucratic, and hey, everyone needs to pay the rent one way or another. “Of course I’ve done targeting,” one character says when challenged on the morality of her actions. “Of course I have, like half of the people you know.”

The play strikes a new tone. Now it echoes with the minor chords of Agatha Christie. Everyone on stage is a potential victim. But, who’s the murderer? And is this world still a thin sliver away from our own?

I can’t tell you that. It would ruin the surprise.

What I can say is that if you’re like me, and I’m assuming you are, you will walk out of the theater after seeing “Evening At The Talk House” and maybe go for drinks with some friends you bumped into and no matter how hard you try to distance yourself from the unpleasant business you’ve witnessed on the stage, you’ll find that you can’t escape the disturbing fact that you too are now a character in the play.

In “Evening At The Talk House,” Wallace Shawn has yet again found a new way to remind us of the serious implications of our frivolous lives.

“Evening At The Talk House” runs through March 12, performed by The New Group at The Pershing Square Signature Center, 480 West 42nd Street

Joshua Furst is a contributing editor to the Forward.