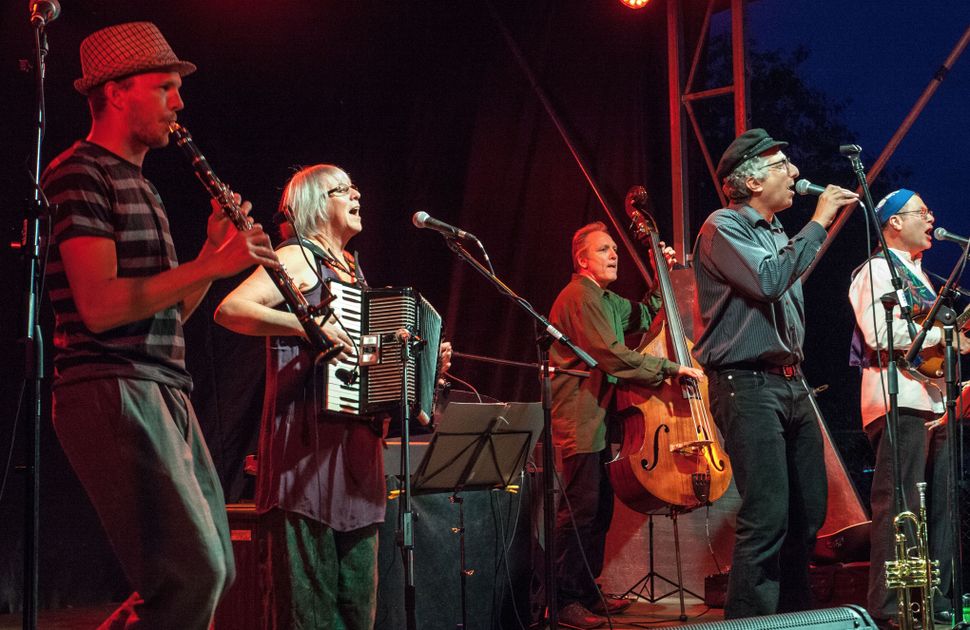 Klezmer, the Eastern European musical tradition of the Ashkenazi Jews, is constantly evolving. Played by musicians called klezmorim at weddings and other celebrations, it has enjoyed a world revival in recent years. The musician and researcher Walter Zev Feldman, an expert on Jewish and Ottoman Turkish music, is Visiting Professor of Music at NYU Abu Dhabi. As a performer, he has released the CD’s “Jewish Klezmer Music” and “Khevrisa: European Klezmer Music.” His latest book, “Klezmer: Music, History, and Memory” is out from Oxford University Press. Recently Professor Feldman shared with “The Forward’s” Benjamin Ivry some notions about what is, and what is not, klezmer:

Benjamin Ivry: How much fun is authentic klezmer music? At an Ashkenazi wedding celebration, you describe music played before the chuppah as an “invitation for the souls of the dead parents to come…[an] almost necrophiliac fantasy…given even more scope when the community was facing an existential threat.”

Walter Zev Feldman: In Eastern Europe among Jews, there had to be a balance of the serious penitential with the joyous, so a wedding among Jews in East Europe has very little to do with the concept of a wedding of Jews in America or Israel. It had to begin in a very sad and tragic way, otherwise it would have been considered ill-omened for the future. You had to earn your happiness; it wasn’t just a given.

One klezmer tradition included a penitential song about how the bride’s happy life in her family home was over and responsibilities of marriage and childbearing were upon her. Was this gloomy prediction for women made because only males wrote and performed klezmer music at the time?

No, I don’t think that’s relevant. This is a confluence of rabbinic thinking about weddings with a penitential aspect in the old Ashkenaz tradition. There are also several gentile folk cultures from Turkey to Russia that emphasize sorrow for the bride. This question has never, ever been researched before, so it needs more study.

You explore what have been called moralishe niggunim or “melodies of a high moral character,” which although not as weepy as other klezmer tunes, nevertheless had plenty of high seriousness. Is the subject of klezmer inevitably somber due to the Holocaust and other factors and has klezmer become a funereal art for those interested in its past?

I did not mean to give that impression, actually. It’s interesting that you read it that way. “Klezmer: Music, History, and Memory” is part one, the history of the music of the klezmorim into the Shoah, not about the immigration. My next book, “Untold Stories,” will show the aspect of the klezmer tradition which is actually kept alive. It’s not entirely a dead thing.

You note that traditionally, klezmorim “did not accompany singers and considered themselves superior to vocalists.” Doesn’t this contradict much of world instrumental tradition, in which musicians aspire to the expressivity of the human voice? What was wrong with singers?

There was nothing wrong with the chazzan. In Europe, the klezmer never accompanied the chazzan, a professional singer who performed with no accompanists. It was taboo because the rabbis forbade singing at weddings. The Ashkenazim were the only Jewish culture documented where women were not allowed to sing at weddings. That was obviously because of moral reasons, where rabbis for centuries were telling men they should not listen to the voice of women. But in other Jewish cultures, this was not taken as seriously.

The Argentine-born Israeli clarinetist Giora Feidman has claimed, “Klezmer is not Jewish music.” Would you agree?

I have no idea what he is talking about. Giora is a good musician from a klezmer family, but he has done zero research so you have to discount what he says, it has nothing to do with reality.

The Shirim Klezmer Orchestra released a klezmer-style version of Tchaikovsky’s “Nutcracker Suite.” If Tchaikovsky is added, can any room be left for klezmer?

I think that [crossover] fashion has ended. I don’t think that’s going anywhere. Klezmer music was one of the most stable features of Jewish music, with a class of professional musicians who developed it for 400 years. 400 years is no small thing.

Since klezmer compositions were jealously guarded by those who composed them, and it was not considered right for rival bands to play them, how did the popularity of certain melodies spread?

Well, after the death of the composer. It was considered improper to play his compositions when he was still alive. Even then, the band inherited the bandleader’s compositions and the best bands were led by composers.

You mention the existence of some obscene Yiddish songs set to klezmer dance tunes, so well-known that these melodies could no longer be performed by klezmorim since the “audience would be aware of the obscene lyrics” as an insult directed to the marriage couple. Were weddings a social minefield, where participants were constantly on the lookout for offenses from musicians or guests?

Remember, the job of the badchen [a comedian who entertained guests at Ashkenazi weddings] was to insult people and express the dissatisfaction of the community with some of their leaders. It was a time when people could let go of certain inhibitions, but this had to be done according to a cultural code.

You cite one source to the effect that brisk tempos were only considered appropriate for the young, whereas to play a tune with a fast tempo for old people was “an insult.” Yet you also mention that the dancer and choreographer Felix Fibich (born Fajwel Goldblat; 1917-2014) was capable of high kicks in his later years. Is traditional klezmer, in addition to being sexist, also ageist?

Au contraire. Young people weren’t full participants. In Jewish culture, you might become a human being after you were forty, and were definitely one after sixty. Jewish dance was based on moderate tempos, partly because it allowed gestural expressivity, which might be lost when tempos are increased. This is not affected by age. In fact, tempos have increased in America and Israel since the 1960s, especially among Hassidim and this has pretty much destroyed their traditional dance. This question has never been investigated, but it is an empirical fact.

You remark that musicians and audiences interested in klezmer now range from Northern Europe to Asia and the Middle East. Can a Korean or Indian musician, however charmed by klezmer, contribute to keeping its traditions alive?

It remains to be seen. These countries have a very recent relationship with klezmer music. I’m invited to Japan in March, and on Facebook I am already greeted by a dozen Japanese klezmorim. They are very good musicians that’s my model.

How much politicization is good for klezmer? In 2015, a North American concert tour of the Glass House Orchestra and Frank London sponsored by the Hungarian government faced calls for a boycott due to the overt anti-Semitism of some elements of the Hungarian government today. Are there other examples of klezmer being used as propaganda by authoritarian or racist governments?

I haven’t followed that. Musicians always, forever, have to deal with political ambiguity they are put into. I was a student of a great Armenian musician who had performed for Stalin and the last Shah of Iran. This is just a new twist. Sholem Aleichem can also be used or abused, like any cultural product.

Can anyone play klezmer? Magdalena Waligorska’s “Klezmer’s Afterlife: An Ethnography of the Jewish Music Revival in Poland and Germany” (2013) expresses the distaste felt by some with the klezmer revival in Poland and Germany today as played and appreciated by non-Jews, termed fakelore, or as one book called it, music of the Grandchildren of the Victims for the Grandchildren of the Master Race. Do you share these concerns about who should be allowed to play klezmer music after Auschwitz? Where does a tribute stop and cultural appropriation begin?

We wouldn’t have much of a klezmer revival now were it not for Germany. Germany played an important role in urging American Jewish musicians to rediscover their own roots. They encouraged American Jewish performers to transcend the nostalgia and commercialization of music that had taken over in America and seek something more authentic. The most important festival for Jewish music is Yiddish Summer Weimar. The German audience, with a high level of musicality, was demanding, not easily satisfied, and had a very positive effect. A few, not many, of the best performers of klezmer music are German.