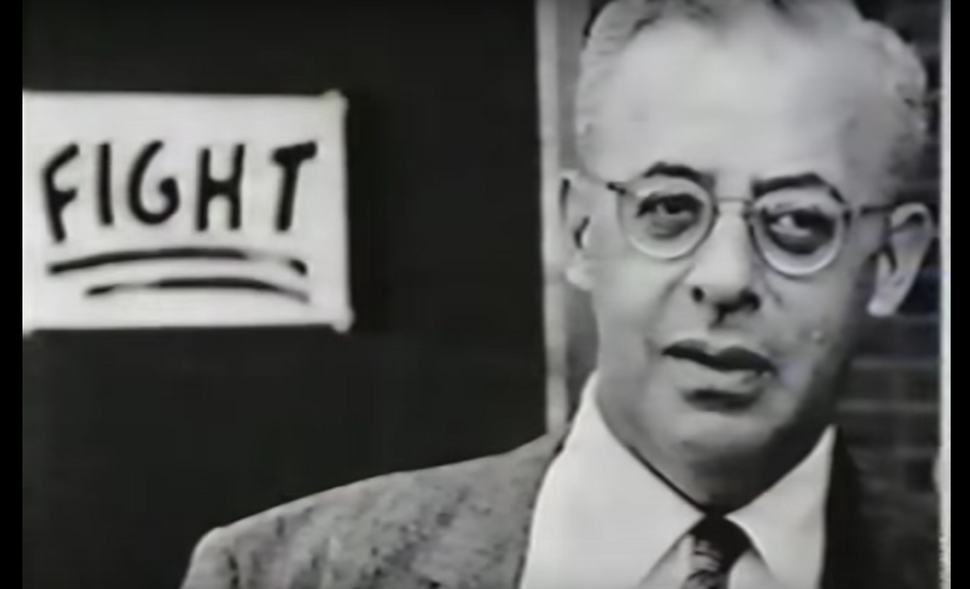 If you’ve watched to Fox News or read Breitbart in the past, say, eight years, it’s likely that you’ve heard (or seen) the name “Saul Alinsky.” He’s frequently invoked by the likes of Sean Hannity as the bogeyman.

So just who is this guy, and why does the Right love to say his name? Saul Alinsky (1909-1972), the Chicago born son of two Jewish Russian immigrants, was a community organizer and author. He began his community organizing career in Chicago’s “Back of the Yards” neighborhood, the setting of Upton Sinclair’s “The Jungle.” In “Back of the Yards,” Alinsky worked with the Packinghouse Workers union to organize the area’s meat packing laborers. The success of the effort was partially due to Alinsky’s ability to organize the community, not just the workers, around the cause of unionization.

Which brings us to a side question that seems worth acknowledging – just what is “community organizing?” Like Alinsky’s name, the phrase has been used as a pejorative by the Right (in Breitbart, for example, community organizer is almost always written with scare quotes – though it seems fitting that Breitbart would be “scared” of collective action). Community organizing is exactly what it sounds like – organizing members of a community around a cause. Let’s say, for example, your neighborhood is plagued by potholes. Individuals may call the city councilman to demand they be fixed, but their individual voices get lost in the din of bureaucracy. When all of those individuals are organized however, then each voice is amplified by the other – an organized protest is louder than an individual scream, a letter writing campaign more annoying than a single angry note. Collective action is simply more powerful than individual protest. The role of the community organizer is to facilitate this collective action.

Okay – back to Alinsky. While Alinsky made a name for himself as a community organizer, rallying communities and workers against corporations like Kodak (advocating for more equitable hiring practices), he is most famous now (to the extent that a slightly obscure community organizer can be famous) for his 1971 book “Rules For Radicals.” The title alone is enough to scare the life out of someone like Hannity, who in turn throws around the book’s title, like Alinsky’s name, to scare the life out of his listeners (radical = evil, if you hadn’t heard). The book enjoyed a moment in the spotlight during Barack Obama’s first run for president. Obama, a community organizer, was naturally acquainted with, and linked to, Alinsky’s work. In an effort to demonize the candidate, the Right invoked “Rules For Radicals” as some forbidden text, as a Leftist “Protocols of the Elders of Zion,” a book whose very name is damning enough to derail a candidacy.

On the topic of damning, lets’ return for a moment to Ben Carson’s aforementioned satanism rant at the Republican National Convention in 2016, where the book was again thrust into the spotlight. Carson, speaking about Hillary Clinton’s relationship with Alinsky, stated that “Rules For Radicals” “acknowledges Lucifer, the original radical who gained his own kingdom.” The New York Post ran with the speech, falsely claiming of his followers, particularly Hillary Clinton.

So, is the book an ode to Satan (or the satanism of Communism)? No. It’s just a guide for effective community organizing. The opening paragraph of the book is Alinsky’s mission statement: “What follows is for those who want to change the world from what it is to what they believe it should be. ‘The Prince’ was written by Machiavelli for the Haves on how to hold power. ‘Rules for Radicals’ is written for the Have-Nots on how to take it away.” “Take it away” might make it sound like what follows is a call for insurrection, but really it refers to organizing the disempowered to level the playing field. The most cited portion of the book is Alinsky’s thirteen rules for organizing and action. When right-wing pundits ominously tell you that the left is using a guide to inform their protests against the Trump administration (who ever heard of such a thing – learning from a book!), they are often referring to “Rules For Radicals.”

So now you know – when you hear “Alinsky,” or “Rules For Radicals,” don’t imagine the Red Bogeyman with a hammer and sickle in hand and a jackboot on freedom’s throat. Rather, just think of a bespectacled Jew from Chicago with some effective ideas and a decent sense of humor.