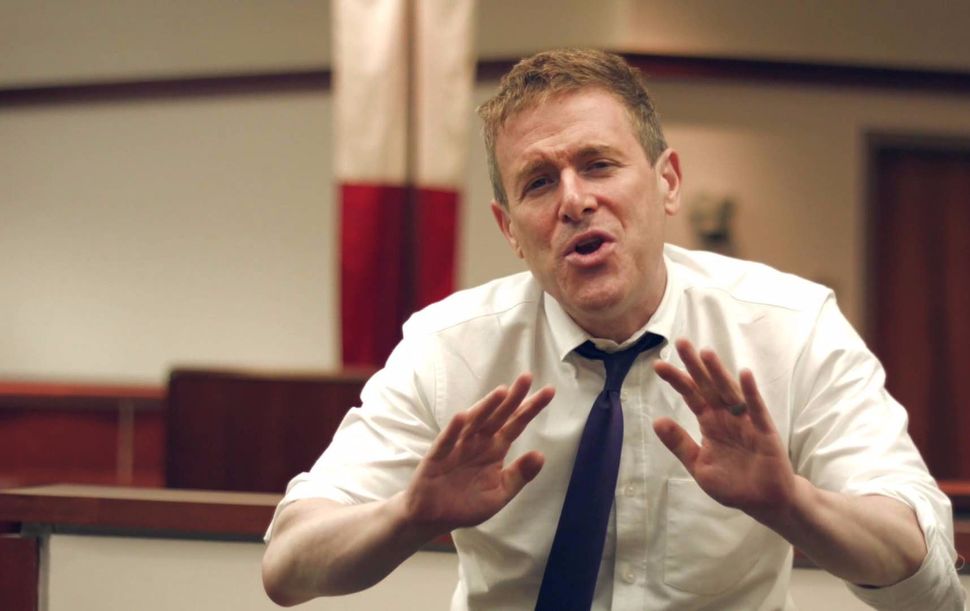 “As President Trump prepares orders to wall out Mexicans and shut out refugees from America, today marks one of the most hateful days in our nation’s history,” Goldstein wrote on the Center’s Facebook page. “Donald Trump is retracting the promise of American freedom to an extent we have not seen from a President since Franklin Roosevelt forced Japanese Americans into internment camps during World War II.”

On February 21, after Trump condemned recent anti-Semitic incidents — which have included bomb threats called in to Jewish Community Centers around the country and the desecration, this past weekend, of a Jewish cemetery outside St. Louis — as “horrible” and “painful,” Goldstein published another statement chastising the president, calling Trump’s words “a Band-Aid on the cancer of Antisemitism [sic] that has infected his own Administration.”

Before Goldstein became the Center’s executive director this past June, it’s unlikely the organization would have taken so political a stance.

Since Goldstein came on board, the Center, which has a staff of nine, has rented out its lower Manhattan gallery, opened a satellite office in Los Angeles, and initiated plans to expand its programming. (Those plans include taking traveling exhibits to an expanded number of schools across the country, along with training in social justice skills, and opening a south Florida office.) In recent years, the Center’s yearly budget has hovered between $750,000 and $850,000; until the Center stopped exhibiting in the gallery, Goldstein said, the exhibit was attracting an average of six visitors per day and reaching 3,300 New York City schoolchildren a year.

Following his February 21 statement, Goldstein made a number of media appearances, most contentiously on CNN’s “Out Front,” where he squared off with conservative commentator Kayleigh McEnany. A particular exchange in that segment drew attention: McEnany asked Goldstein if he believed Trump to be personally prejudiced against Jews, to which Goldstein replied “you bet.”

Goldstein, the former executive director for Garden State Equality, a New Jersey organization that advocated for LGBT rights, is familiar with being in the spotlight. In 2015, he was portrayed in the film “Freeheld” by Steve Carell.

The Forward spoke with Goldstein about the Anne Frank Center’s mission, Trump, and how Goldstein understands the Center’s role in the current political environment. This is an edited version of the conversation he had with the Forward’s Talya Zax.

Talya Zax: Can you give me a brief history of the Anne Frank Center for Mutual Respect, as well as an idea of its programs, its reach, and its budget?

Steven Goldstein: The Anne Frank Center was founded in 1959 by Anne Frank’s father, Otto Frank. It was one of the three original Anne Frank organizations. There’s the world-famous Anne Frank House in Amsterdam [founded] in 1960, and he also founded a charitable organization called the Anne Frank Fonds in Basel in 1963.

Otto Frank had worked here when he was 19, and he always had a love for the U.S. When “The Diary of Anne Frank” hit Broadway in 1955 and became a huge sensation, that plus his time spent in the U.S. led him to establish an organization here. The organization has operated from 1959 to the present; from 2011-2016 the organization ran a small public gallery in lower Manhattan.

How did you come to be the Center’s director, and what have your goals in that position been? What progress have you made towards meeting those goals, and what obstacles have you faced?

What I told the board that hired me was look, I want to completely re-imagine this organization as a hybrid historic and social justice organization. I want it to maintain the historic aspect of the organization, which is to perpetuate the memory and legacy of Anne Frank, and the lessons of the Holocaust, by sending our exhibits and programs in much greater depth to communities across the U.S. And I want to not just preserve history for the sake of history, but to use history so that its tragedies would never happen again. The organization had always given some but not much attention to the issues of today. That’s clearly now changed. Here’s my thinking: Otto Frank founded our organization in 1959 to stand up for equal rights and mutual respect among people. We’re going back to Otto Frank’s mission. He knew that a focus on contemporary issues would be the basis by which Americans would find our organization compelling.

Many of the statements the Center has put out have come directly from you. How do you negotiate being both the organization’s public face and its internal leader?

Before I came here, I was a professor of law and political science at Rutgers. In political science I would teach political communication. And one thing I know is people want plain speaking. People don’t want to hear mealy-mouthed, tepid anxiety about the threats to civil and human rights in this country today. Part of Donald Trump’s appeal is that he speaks in bold declarative sentences. And for his base, he speaks their voice in clear bold terms. You will see from my communications I speak in a progressive sense with that same tone. I happen to be the guy who writes all the Twitter messages, and I’m the guy who writes all our communications, and I ask myself each time, does a real human speak like this? Being outspoken in the press is just one way we intend to revolutionize this organization. My colleagues and I seek to build a genuine grassroots movement from the bottom up that fights for civil and human rights in America.

Your statement and subsequent media appearances yesterday have attracted some backlash. Can you share your response to that?

I was involved in the marriage equality movement as a LGBT activist for many, many years. I never received the criticism that I have gotten in the anti-Semitism from the right I’m getting now. It’s more than outbalanced by praise for our stand for a kinder and fairer world, but no matter how tough as nails an activist like me might seem, you get rattled by anti-Semitism.

The Forward first wrote about the Center’s response to President Trump’s policies and public stances after your January 25 statement criticizing Trump’s administration’s targeting of Muslims and Mexicans. Was there a point at which you and/or the Center’s staff and board of directors made clear decisions as to how you intended to publicly respond to Trump? If so, can you describe that decision-making process to me? If not, can you discuss how the Center’s responses have been shaped on the fly?

When I came into this job last year, I vowed that this organization would work with whomever won the presidency. [But] the organization knew who it was hiring when it hired me. The organization knew it was getting a social justice activist. When I formally began my job last summer I told the organization exactly how I would respond. The organization had in parallel come to the same conclusion that it needed to be far more active on issues of civil and human rights. The president addressed issues at the core of my organization’s mission immediately. We didn’t set out to be the fiercest critic of Donald Trump in the Jewish world. It was he who came out storming with his agenda and left us no choice. Frankly, we hope for the best from President Trump. If we can take a more conciliatory approach because he has in turn become more conciliatory, we stand ready.

Over the last 24 hours you’ve publicly articulated a belief that Trump is an anti-Semite. What do you think the potential benefits and harms of affixing him with that label are, especially coming from the leader of an organization dedicated, as articulated in your mission, to addressing “civil and human rights across America?”

The question is: What do we have to lose when we don’t call something or someone the person or situation that it is? It is important to call out anti-Semitism in its starkest terms.

Update Note: This article has been updated to include further information about the Anne Frank Center for Mutual Respect.