The Secret Jewish History Of The Pussyhat 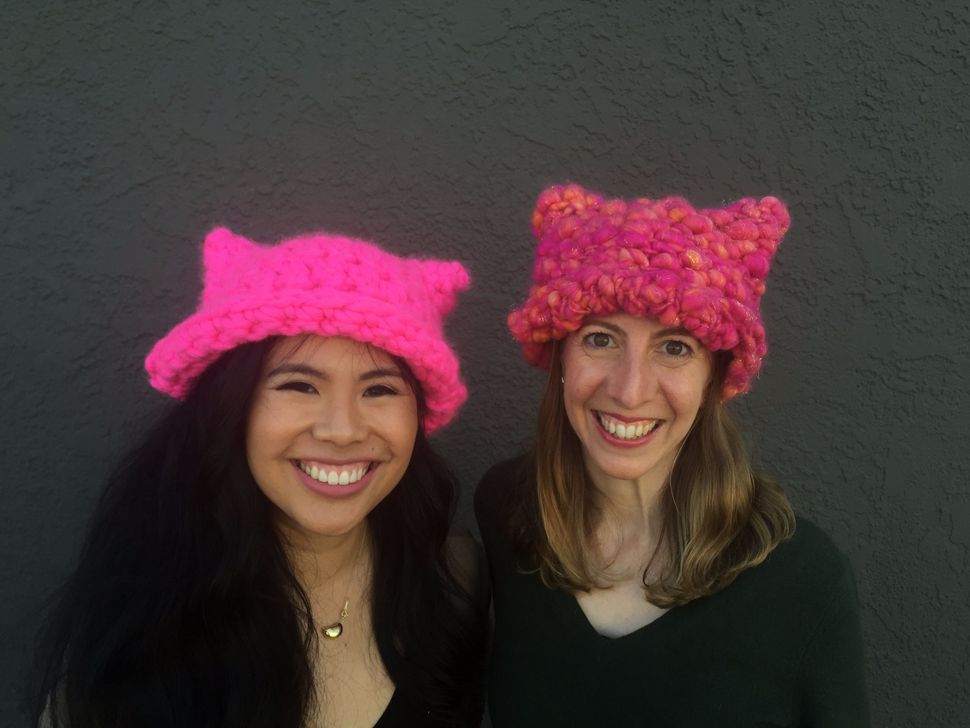 Jayna Zweiman, co-creator of the Pussyhat Image by Breelyn Burns

While supporters of Donald Trump sport red baseball hats with the promise to “Make America Great Again,” Trump’s opponents have their own signature piece of headwear: the pink pussyhat. The hand-knit hat with cat ears designed by Jayna Zweiman, 38, and her friend Krista Suh has become a recognized symbol of dissent. It is also, according to Zweiman, her personal act of tikkun olam.

All four of Zweiman’s grandparents emigrated from Eastern Europe and while they made every attempt to assimilate, they told their granddaughter about what they endured. Zweiman’s grandfather had to wait eight years for a visa. Her grandmother, a refugee after World War I, subsisted for several months on potatoes.

“I know so many families have these same stories,” Zweiman told me. “It’s just proof that people deserve dignity, respect and safety. That’s the American dream and it has always been a big part of my life.”

Originally from Newton, Massachusetts, Zweiman was educated at a Solomon Schechter elementary school, and attended Brown University where she majored in economics and the visual arts and began experimenting with yarn in art installation projects. During her gap year, she worked in Washington, D.C. on Bill Clinton’s reelection campaign. She received her master’s in architcure from Harvard Graduate School for Design.

“Pussyhat combines politics, art, design, community building and more. My life’s work led to this point at the exact time when the world needed it,” she says.

Established, happily married and working in new media in Los Angeles, Zweiman’s world was turned upside down three years ago when she suffered a severe concussion after a freak accident while shopping with her husband. A metal rod that wasn’t properly secured to the wall fell on her. The aftermath was devastating. No work. No travel. No good. Knitting became Zweiman’s go-to activity during her recovery and local yarn store The Little Knittery in Atwater Village her safe haven. There, she and Suh learned to knit together and reveled in the quiet conversation of a knitting circle.

That quiet soon erupted. Just two days after the election, Zweiman and Suh began discussing ways to get involved in the Women’s March. As Zweiman was healing slowly, there was no way she could physically be in Washington DC. Or New York. Or Helsinki. Or any of the other 600 marches where people gathered to protest the Trump agenda. She sympathized with others who couldn’t join in, and sought to give those people a way into the protest.

“Going through this experience opened my eyes to ideas about accessibility. It’s our responsibility to create opportunities for everyone,” she said.

Zweiman and Suh brainstormed pattern ideas with Little Knittery owner Kat Cole. They agreed that the goal wasn’t either perfect hats or expensive hats. They just wanted people to be able to participate. Keeping the pattern as simple as possible, knitters were asked to make hats and give them away to friends, family and local yarn stores where they could be picked up for free. Choosing a name for the project was easy (thank you Mr. President). And aesthetically, the color pink would reclaim the power of femininity. Jayna herself dreamed of a sea of pink. That “beautiful cohesive image,” as she described it, would create a true sense of unity.

The women went to social and traditional media to spread the word. Once posted on Facebook, Instagram, Twitter and free online knitting community Ravelry, the project went viral. Even as it reached across the county and globe, Zweiman was still wary. Neither web site metrics, nor their Pussyhat tracker were precise indicators of how many hats were in circulation. In advance of the march, Zweiman and her partners were told that 12,000 hats had passed through the Pussyhat DC affiliate. Not until posts popped up of Washington-bound busloads of Pussyhat wearers did Zweiman realize her pink sea was possible.

Forget sea or even sea to shining sea. On the day of the Women’s March, the entire world was blanketed in pink, cat-eared hand-knit hats. Overnight, the Pussyhat became an iconic image of the new resistance. The hat has appeared on the covers of The New York Times Magazine, Time Magazine and the New Yorker and also found its way onto the heads of Amy Schumer, Cate Blanchett, Missoni models at Milan Fashion Week and the “Make Way for Ducklings” statues on the Boston Common.

Zweiman and her partners are now developing their long-term strategy, including partnering with the Women’s March and Indivisible. As planning continues, so does the actual knitting. Calling it “her own Shabbat,” Zweiman spends most Friday evenings back at The Little Knittery. And with just thirty-something days of our new administration behind us, Zweiman wants the millions of Pussyhat wearers to keep their ears handy. Next up is International Women’s Day on March 8th. Pussyhat is encouraging people to “wear, share and declare,” that is, put their hats back on and upload pictures to #pussyhatglobal to create sea of pink number two. This “global virtual march” is another opportunity for people to connect and feel part of something bigger than themselves.

Zweiman says, “We want to create a movement, not a moment. There’s been such a strong sense of isolation throughout the election cycle. This project is about bringing people together.”

Amy Oringel is a freelance writer based in Bedford, NY where she also helps run independent bookstore Booksy Galore. A contributing writer to Bedford Magazine, her work has appeared in The New York Times, BusinessWeek and Self Magazine.

The Secret Jewish History Of The Pussyhat