Was Lou Reed A Lot More Jewish Than We Thought He Was? 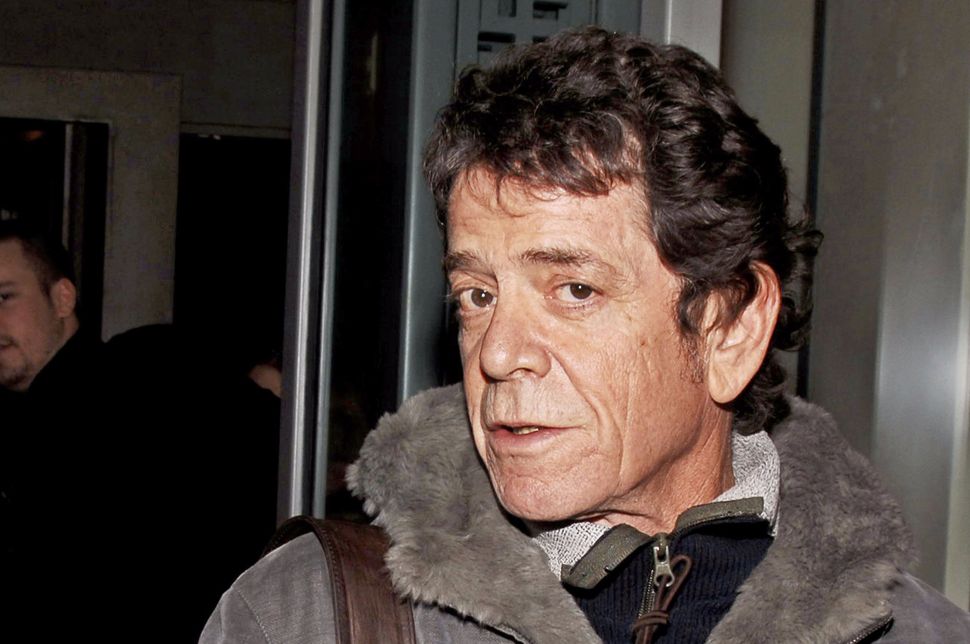 Lou Reed’s archives are headed to the New York Public Library, courtesy of Reed’s widow, performance artist Laurie Anderson. There are already two display cases of items on view in the lobby of the library’s main branch at 42nd Street, where Reed scholars or the merely curious can read the handwritten lyrics to the song, called “Tatters”; a typed contract rider from 1973, whose biggest demand is that a case of Coca-Cola be provided in his dressing room; letters to Reed from Paul McCartney and Martin Scorsese, and the “R” page from Reed’s high school yearbook. The archive will eventually find a home uptown at Lincoln Center’s Library for the Performing Arts.

When the full archive — a major haul of papers, artifacts, recordings, photos, videos and ephemera — is made available to the public, one hopes it will illuminate the incomplete picture of Reed’s relationship to his Jewish background. The penumbra of Jewishness never clung to Reed in the way it did to Leonard Cohen — of whom he was a great fan — or to Bob Dylan, of whom Reed was also a huge fan. But even a cursory listen to the 20-odd albums Reed made as a solo artist between 1972 and 2007 reveals an artist who often thought in terms of Jewish archetypes, ethics, themes and identity.

Reed, who died in 2013, made several trips to Israel, performing with Peter Gabriel in Hayarkon Park in Tel Aviv in the late 1990s. In 2008 he performed as a guest artist with his wife in a Tel Aviv show. On his last visit to the Holy Land, in 2011, Rabbi Levi Weiman-Kelman, of the progressive congregation Kol Haneshama, showed him around the Old City.

Reed was a regular participant in the Downtown Seders presented by music impresario Michael Dorf at the Knitting Factory, the City Winery and the Museum of Jewish Heritage, where he always read the part of the Wise Child plus a specially chosen poem, ranging from Edgar Allen Poe’s “The Raven” to Bob Marley’s “Exodus.”

Reed also honored his own family’s heritage by making a short film in 2010 called “Red Shirley,” about his 99-year-old aunt, Shirley Novick, and her experiences fleeing Poland during World War II, settling in New York as a seamstress and Jewish socialist, and eventually marching in Washington, D.C., in support of civil rights.

By the end of his career, the man who first gained fame singing the praises of heroin with his group The Velvet Underground in the mid-1960s, and who in the mid-1970s sang, “I want to be black… and f—k up Jews,” was reveling in the Jewish treat of his childhood in the song “Egg Cream,” on his 1996 album, “Set the Twilight Reeling.”

Lewis Allan Reed was born in Brooklyn in 1942 to Toby (née Futterman) and Sidney Joseph Reed, an accountant. But this quintessential New York City hipster actually grew up in suburban Freeport, New York, a village on Long Island, in the South Shore town of Hempstead, that was founded as an oystering community in the 19th century and became a hotbed of Ku Klux Klan activity in the 1920s. Perhaps the experience of growing up on Long Island is what inspired the lyrics of his 1976 song, “A Sheltered Life,” in which he sang, “Guess it’s true, what all those people they say / I’m gonna have to lose my hometown ways / Guess it’s true, guess I’ve led a sheltered life.”

Reed went off to Syracuse University, where he initially struggled. After the university sent him home, his parents sent him to a psychologist who recommended electroshock therapy, to which they consented. This provided fodder for Reed’s song, “Kill Your Sons.” But Reed later thrived at Syracuse; there he studied under the American Jewish poet Delmore Schwartz, to whom he would pay tribute in several songs, including the angry “European Son” by the Velvet Underground and the very beautiful “My House.” The latter kicks off his landmark 1982 album, “The Blue Mask,” where Reed sings, “My friend and teacher occupies a spare room / He’s dead, at peace at last the wandering Jew.”

Reed returned to the biblical creation story several times in song. In the title track of “Coney Island Baby,” he sings, “I’d like to send this one out for Lou and Rachel / And the Lord appeared and he has one made of two,” a reference to a kabbalistic rendering of Adam and Eve. He returned to that story in “My Red Joystick” on the 1984 album “New Sensations” — in which he sings, “The first bite of the apple made Eve smart / The second bite taught her how to break men’s hearts / The third bite taught her how to strut her stuff / But she never got to the fourth bite / That says ‘Enough is enough,’”— before turning in this full-blown bit of rock ’n’ roll midrash:

Eve kissed Abel, that’s how he got murdered by Cain
Abraham gave up his son, to keep his wife away
And even the Lord Almighty
Speaking from the trenches to the pits
Spoke for all of mankind, when he said…
Please, please, hey, please, leave me my red joystick.

And an unnamed mammal is darkly rising
As man burns from his tomb….
I’d burn up into a million pieces
And fly into the sun….

In the title track of Reed’s next album, the 1986 “Mistrial,” the narrator is haunted by false allegations and seeks justice in the form of a mistrial “to clear my name” — perhaps a response to the character in Bob Dylan’s “I Shall Be Released,” who can be heard “all day long… crying out that he’s been framed.” In “The Original Wrapper,” on that same album, Reed strikes out at the hypocrisy of several of the right-wing religious figures of the day:

Look at Jerry Falwell, Louis Farrakhan
Both talk religion and the brotherhood of man
They both sound like they belong in Teheran
Watch out, they’re goin’ full throttle….
White against white, black against Jew
It seems like it’s 1942….
I’d much rather see it an eye for an eye
A heart for a heart, a brain for a brain….

“Mistrial” forecasted Reed’s most forceful identification with his Jewish brethren, which came in songs on the 1989 “New York.” Targets included then New York City Mayor Rudy Giuliani, Donald Trump and Farrakhan again, as well as Jesse Jackson and Kurt Waldheim. Reed looks everywhere and sees incipient fascism, and reads it all through the lens of a post-Holocaust Jew. In “Busload Of Faith” he sings, “You can’t depend on the goodly hearted / The goodly hearted made lamp-shades and soap.” The central verse of “Dirty Blvd” could have been written yesterday: “Give me your hungry, your tired your poor, I’ll piss on ’em / That’s what the Statue of Bigotry says / Your poor huddled masses, let’s club ’em to death / And get it over with and just dump ’em on the boulevard.”

“Good Evening Mr. Waldheim” took on the former secretary general of the United Nations. Waldheim was elected president of Austria a few months after documents implicating him in the Nazi deportation of Greek Jews to death camps and in brutal reprisals against Yugoslav partisans were made public, and after the controversial invitation to the Vatican subsequently extended to Waldheim by Pope John Paul II. Reed sings, “Pontiff, pretty Pontiff / Can anyone shake your hand? / Or is it just that you like uniforms / And someone kissing your hand?” The song also indicts black leader Jesse Jackson, referencing the latter’s description of New York as “Hymietown” — “The words that flow so freely / Falling dancing from your lips / I hope that you don’t cheapen them / With a racist slip” — calling on him to “Remember those civil rights workers buried in the ground,” a reference to slain Jewish civil rights activists Andrew Goodman and Michael Schwerner, and for his embrace of anti-Semitic black nationalist Farrakhan.

Also on “New York,” in “There Is No Time,” Reed saw the dangers of Reagan- and Giuliani-era proto-fascism:

One can only imagine what Reed would have made of 2017.

We have yet to know if there’s anything in Reed’s archives that might help elaborate the disparate Jewish threads running throughout his life and work. But we will always have the songs.

Seth Rogovoy is a contributing editor at the Forward and the author of “Bob Dylan: Prophet, Mystic, Poet” (Scribner, 2009). He writes frequently about the intersections of popular culture and Jewishness.

Was Lou Reed A Lot More Jewish Than We Thought He Was?