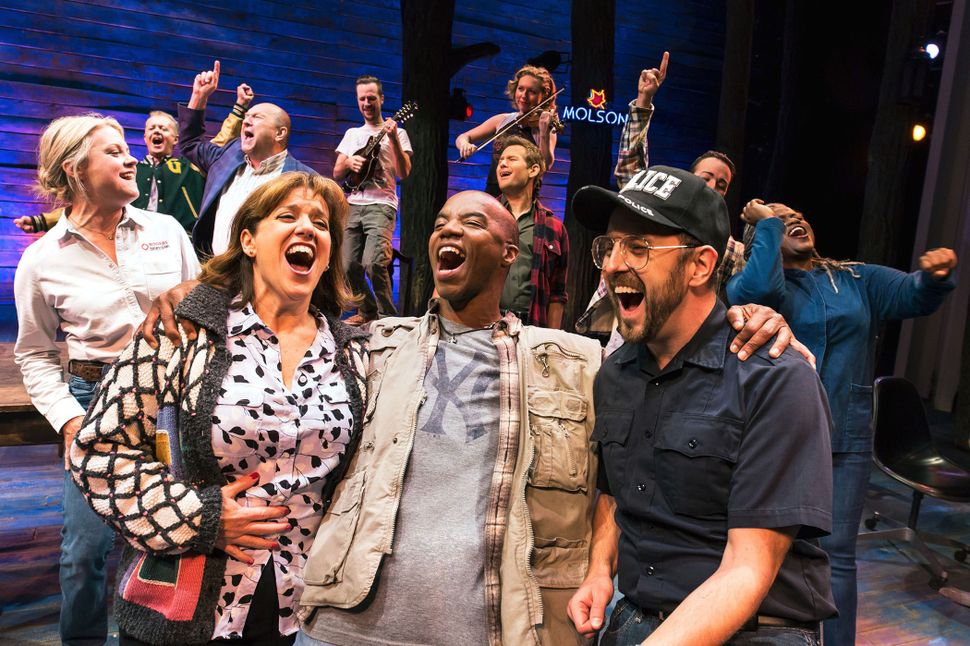 Come From Away Image by Matthew Murphy

On Sept. 11, 2001, the U.S. government closed American airspace to all traffic. Every trans-Atlantic flight less than halfway to its destination was ordered to return to Europe. Those closer to the United States were diverted to Newfoundland
.
It hardly seems the stuff of musicals, but those next four days are at the center of “Come From Away,” the emotional rollercoaster that turns into an ultimately joyous and life-affirming new Broadway hit. At the musical’s center are the incredible efforts on the part of the islanders to house and feed unexpected company that nearly doubled Newfoundland’s population. All told, 38 planes landed at Gander Airport, carrying 7,000 passengers. None knew why they were there. Many did not speak English. Fearing additional terrorism, authorities kept everyone on the planes, some for as long as 28 hours. Among them: a rabbi (Geno Carr), who meets a local man, Eddie (Joel Hatch), a survivor.

As one of the play’s characters notes, “We have all kinds of people living in Newfoundland: Protestants, Baptists, Catholics, Salvation Army-ists — but not a lot of Jewish people.”

Still the rabbi says, “The next thing I know I’m set up at the faculty lounge, making a kosher kitchen for any other Jewish passengers — but also for two Hindu women, some Muslims.”

Later, the rabbi comes out singing perfectly accented lines of the Kaddish:

“There is a man here in town,” he continues. “He’s lived here nearly his entire life. He heard that there was a rabbi diverted here. He came to find me and tell me his story.”

“I was born in Poland, I think,” Eddie says. “And my parents – they were Jews – they sent me here before the war started – I still remember some prayers they taught me. As a boy, I was told I should never tell anyone that I was Jewish —even my wife. But after what happened on Tuesday — so many stories gone – just like that. I needed to tell someone.” The pair then sing the Kaddish together. It is just a few minutes in the play but it resonates and is a highlight in a play filled with them.

Carr, who grew up a Methodist in New England, was coached for the show by a rabbi. Hatch grew up Lutheran on a farm in Minnesota and never knew a Jew until he attended college. “I knew nothing about any of the characters when I read for the audition. But when I got to Eddie, I knew he was someone who feels he’s on the outside in the community he’s in. All people experience that at some point or another, particularly people of other races or religions or sexual identities, who probably feel that with more intensity.”

Ironically, as part of his research into the part, Hatch found that Eddie’s “family wasn’t all that excited about him meeting with the rabbi — They still wanted to keep it [his Judaism] a secret.”