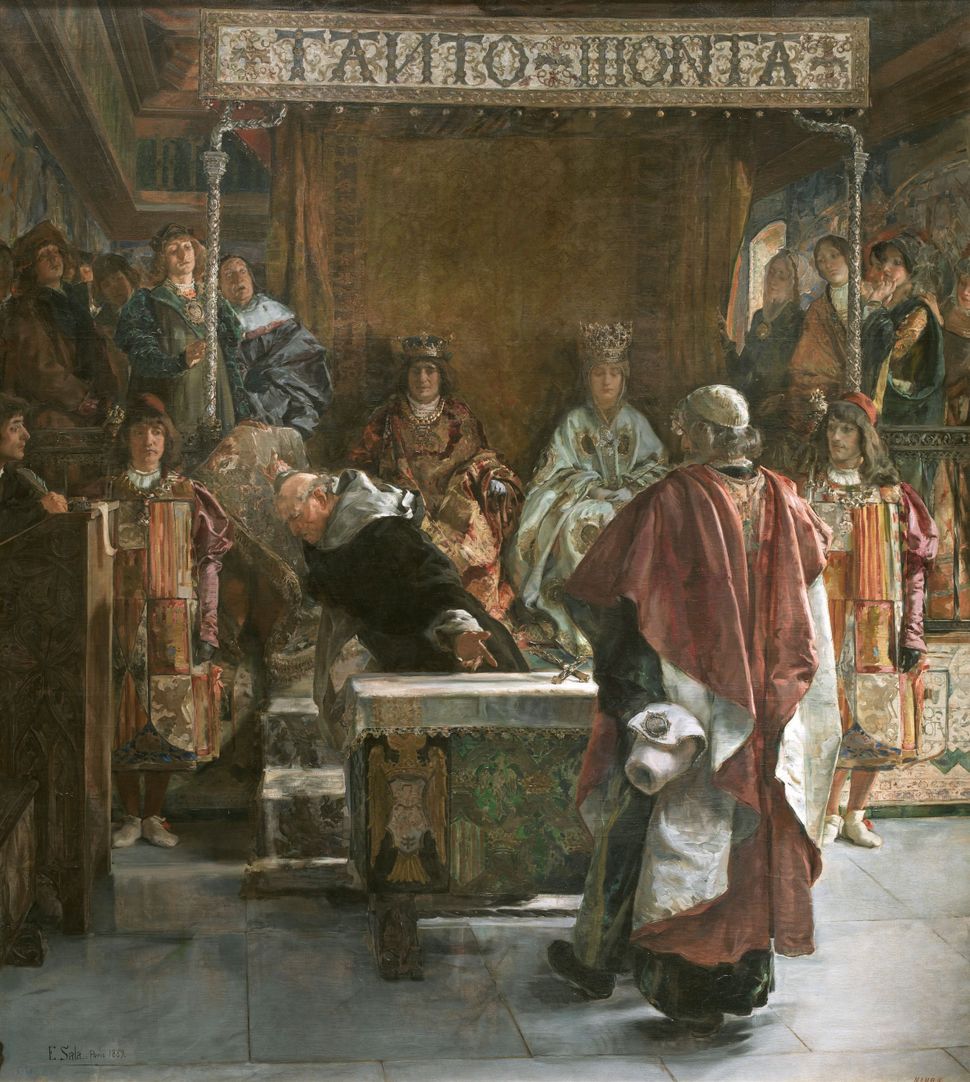 “Nobody,” the Monty Python skit goes, “expects the Spanish Inquisition,” and the same goes for visitors to the Prado Museum in Madrid. Turning a corner on the second floor, viewers come face-to-face with Emilio Sala Francés’ 1889 painting “The Expulsion of the Jews from Spain.”

In the picture, a lavishly-dressed Jewish emissary has laid a treasure chest at the feet of Isabella I of Castile and Ferdinand II of Aragon, who sit enthroned beneath a canopy bearing their motto, “Tanto Monta.” Just as it’s impossible for viewers to connect with the messenger — his back is turned, and it’s easy to get lost in the folds of his lavish attire — his plea to prevent his people’s expulsion falls flat.

All eyes, save the apparently-napping queen’s, are on the modestly-attired monk Tomás de Torquemada, who dramatically casts a crucifix on the box. The message is clear from Spain’s first grand inquisitor, whose name Britannica notes “has become synonymous with the Christian Inquisition’s horror, religious bigotry, and cruel fanaticism.” If the Catholic monarchs accept this Jewish blood money, they might as well be Judas selling Jesus out to the Romans.

The Inquisition rears its ugly head elsewhere in the museum, including in works from Ávila’s Convent of Santo Tomás, which was the Inquisition’s headquarters. Torquemada commissioned Pedro Berruguete’s “Saint Dominic de Guzmán” (1493-9), which casts Saint Dominic symbolically as an inquisitor. Another Berruguete work depicts an auto-da-fe, and a late 15th century canvas by an unknown artist titled “The Virgin of the Reyes Católicos” depicts Torquemada kneeling behind Ferdinand. On the other side of the cross, another monk kneels behind Isabella; given the sword in his chest — a sign of his martyrdom — he may be Pedro de Arbués, the inquisitor who was assassinated by conversos in 1485.

The Prado collection features several works by Goya and Eugenio Lucas Velázquez, which directly reference the Inquisition. The condemned wear conical, white hats in Velázquez’s c. 1860 “Woman Condemned by the Inquisition,” and the title of Goya’s 1808-11 “For Moving His Tongue in a Different Way” may reference Hebrew prayer, notes the Prado website.

The picture of Torquemada casting the crucifix in condemnation of the Jews, however, feels like a memorialization, as does Jean-Paul Laurens’ 1882 painting “The Pope and the Inquisitor.” Others, like Solomon Alexander’s work on the subject, depict the Spanish Jews beseeching the Catholic monarchs more heroically. But what are viewers to do with the previous troubling sort?

The Prado picture by Sala is a tough work for modern audiences, admits Mark Roglán, director of Southern Methodist University’s Meadows Museum in Dallas. “I would try to see it with a historic lens as much as possible to explain it to modern audiences,” says Roglán, who used to conduct research at the Prado and who was knighted by former Spanish king Juan Carlos I.

Even in the 19th century, when European artists frequently mined historical subjects, Spanish painters rarely explored the Jewish expulsion. When they depicted the reign of Ferdinand and Isabella, which they did often, painters tended to focus on two main events during their rule: the conquest of Granada and Columbus’ discovery of America, according to Roglán.

“It seems to me that Sala, working in the late 19th century, had to dig deep in the history of these kings in order to find a subject that had not been used previously, which resulted in this strange and gruesome episode with Torquemada,” Roglán says. “Saying that, I would still find it hard to explain to any audience this sad episode in the history of Spain.”

Similar questions surface at the Harvard Art Museums when viewing Fra Angelico’s “Christ on the Cross” (1453-4). The Virgin Mary and Saint John the Evangelist stand on opposite sides of the cross, as Cardinal Juan de Torquemada, Tomás’ uncle, kneels before the cross. The skull under the crucifixion may serve a number of symbolic roles — a reference to Golgotha, which means skull, or to Adam — but it can also stand in for the Inquisition’s brutality.

The elder Torquemada — who had Jewish ancestry according to some scholars, including Benzion Netanyahu (the Israeli prime minister’s late father) — first defended the conversos but was later involved in the Inquisition. This Torquemada became cardinal in 1439 and lived in Rome at the same time as Fra Angelico, who arrived in the 1440s, and returned the next decade, before dying in Rome in 1455, says Danielle Carrabino, associate research curator at the Harvard Art Museums.

“As fellow Dominicans, the two resided together among other monks at the Dominican convent at the church of Santa Maria Sopra Minerva in Rome,” Carrabino says. “Although the dates of these two men from the Torquemada family do overlap, scholars confirmed the identity of the cardinal in our painting, because his coat of arms appears on the back of a panel that was once joined to ours, now in a private collection.”

Whichever Torquemada one views at the museum, there is likely troubling subject matter lurking beneath the surface. Where Monty Python pokes fun at the Inquisition — while also inserting historical reference to its diabolical actions amid the skit — some painters displayed a degree of sympathy for its founding inquisitor. Those works are often important art historical pictures, but one hopes that wall labels would at least display the kind of warning and disclaimer that the Inquisition receives in the Monty Python sketch.