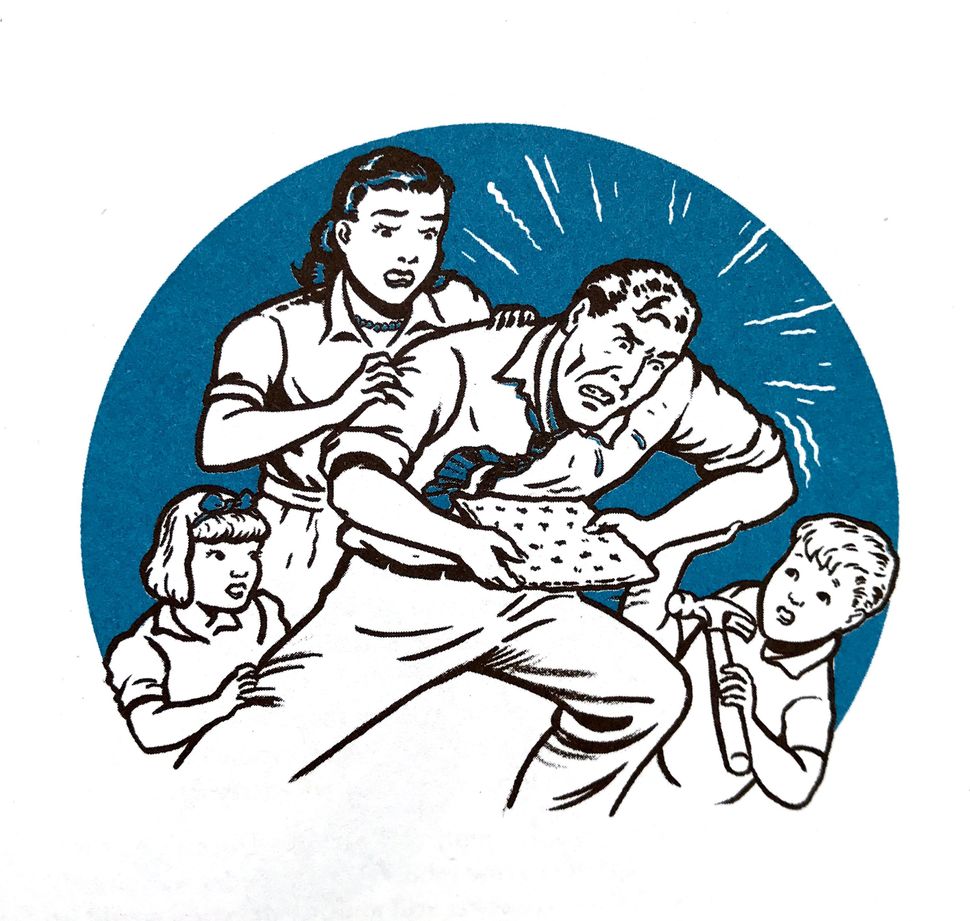 For This We Left Egypt Image by Ross MacDonald

Let’s face it, seders can be boring. Jews want to eat and there’s this long text cock-blocking their way to the brisket. Sure, it’s punctuated with a few nice songs and maybe some interesting discussion, but all told, listening to another year of Rabbis Eleazar, Yehoshua, and Tarphon, et al, ramble on about the exodus is just not that exciting. Leave to the rabbis to screw up a great story of liberation by insinuating themselves into it.

Seders are so boring that there’s even a Yiddish expression denoting impatience based on this very fact: “Er meynt nit di seyder nor di kneydlekh,” which means, “He doesn’t want the seder, just the “kneydlekh.” And who wouldn’t prefer to skip the seder and head straight for the matzo balls?

It is for this reason that the seder, along with its central text, the Haggadah, are so ripe for satire, a matter that is, historically speaking, nothing new. In fact, one of the odd things about Jews is that they appear to be the only religious/ethnic group that consistently parodies its own liturgy. I’m not talking about an occasional riff on a psalm or a blessing, but hundreds of years of taking everything from Rosh Hashanah and Yom Kippur prayers to those of Sukkot and Passover, and filling their liturgical structures with something topical and funny. God did designate one holiday to getting drunk and making merry — Purim – but lo dayenu: it wasn’t enough for us. The Jews have to make fun of every holiday.

And Passover, the holiday of national liberation, comes in for more parodies than any other holiday. There are hundreds of them. The earliest recorded parody of the Haggadah is from 13th century Spain. But beginning in the late 19th century, Yiddish parodies of the Haggadah began to appear in larger numbers and the invented tradition of Haggadah parody took off. This body of work is the most voluminous and the text is used to launch comic and sometimes furiously critical attacks on everything from political ideologies to beauty pageants to current events. Many of these parodies appeared in humorous holiday magazines created specifically for Passover. Bookended by four days of forced rest and surrounded by anti-Semites, Yiddish-speaking Jews needed something funny to read.

As for the seder, Passover’s feature presentation, it’s often not as exciting as the trailer. In fact, the tedium of the seder has been known to Jews for thousands of years. Even the Talmud provides license to chuck a piece of matzo like a frisbee at a sleeping child. And with its distinctly memorable categories — four questions, four sons, ten plagues, etc. — the Haggadah text is easy to work with. Finding four new questions, four new sons, and ten new plagues has never been particularly difficult.

Enter Dave Barry, Alan Zweibel, and Adam Mansbach with their new Haggadah, “For This We Left Egypt?” — a full-fledged comic assault on Passover “for Jews and those who love them.” Part parody, part satiric commentary, these three humorists have obviously been to one too many boring seders and decided to take action. Finally, someone has created a full Haggadah that is not only fun to read, but isn’t covered in wine stains.

Historically, most Haggadah parodies are partial. Those that appeared annually in the Yiddish press didn’t take on the entire book, but presented comic versions of the better known categories. Departing from this simpler style, “For This We Left Egypt?” not only takes on the entire text, but the entire narrative, and the holiday’s customs. Moreover, they mock the plethora of Haggadahs that have been published over the past few years, with their lame discussion questions and sometimes obtuse commentaries.

One of the particularly clever aspects of “For This We Left Egypt?” is the authors’ own commentaries, much of which appears as footnotes (think Artscroll Gone Wild). Working the text like a comedic Rashi, the authors riff on nearly every aspect of the Haggadah, the holiday, and the Jews themselves. In fact, they make it a point to skewer middle class North American Jewish culture. Take, for example, their description of the Israelites arrival at Mt. Sinai:

“Moses and the Israelites came to a mountain called Mount Sinai, which was also known as Horeb. There they made camp, which was hard because Jews are not into camping. Our idea of roughing it is a hotel where the breakfast buffet does not have an omelet station.”

And if guilt has become a primary trait among American Jews, the authors make ample use of it in the telling of the exodus:

“So, long story short, they finally reach the Promised Land, but it turned out that Moses was not allowed to enter because of a problem with his passport. “Don’t worry about me,” he told the Israelites. “I’ll just go up on Mt. Nebo and die. Alone. After all I’ve done for you. It’s fine. Really.”

Mocking virtually every aspect of the Haggadah, from the the search for chometz to the last cup of wine, the authors’ comic barbs frequently take aim at the foibles of progressive Jews: They seem to take particular joy in mocking vegans and their fear of the shank bone. But with this Borscht Belt Haggadah, everything is fair game. Their parody of Echad Mi Yodeya, possibly the best ever created, delves into topics as diverse as smoked fish, Jewish literary history, and baseball statistics.

Unlike almost every other Haggadah, “For This We Left Egypt?” actually tells the story of the Jews’ enslavement in and exodus from Egypt. Admittedly, it’s an absurdist retelling with comic asides every other line, but the story of the exodus still comes through. This is a lot more than we can say for real Haggadahs, which drone on ad nauseum about God and his outstretched arm, but fail to actually give us a solid telling of the actual narrative. While it’s true that nearly everyone knows it, such background knowledge doesn’t make the actual text any more appealing. This, of course, is why the Haggadah is the most parodied Jewish text in history.

Barry, Zweibel, and Mansbach may not know it, but their parody sits comfortably in the bosom of Jewish literary tradition. Their combination of high silliness, cultural criticism, and pop culture referencing has a long history, particularly in Yiddish, and makes for hilarious Passover reading. You might not want to use it during your seder, but it will make the hours spent in your bathroom during the intermediate days of the holiday far easier to bear. With comic references that range from “The G-dfather,” Lord of the Rings, and Dwayne “The Rock” Johnson, “For This We Left Egypt?” runs riot with the Haggadah and takes readers from the sophomoric to the sublimely funny. Plus, it’s also the only Haggadah that mentions A Tribe Called Quest. That, in and of itself, is reason to buy it.