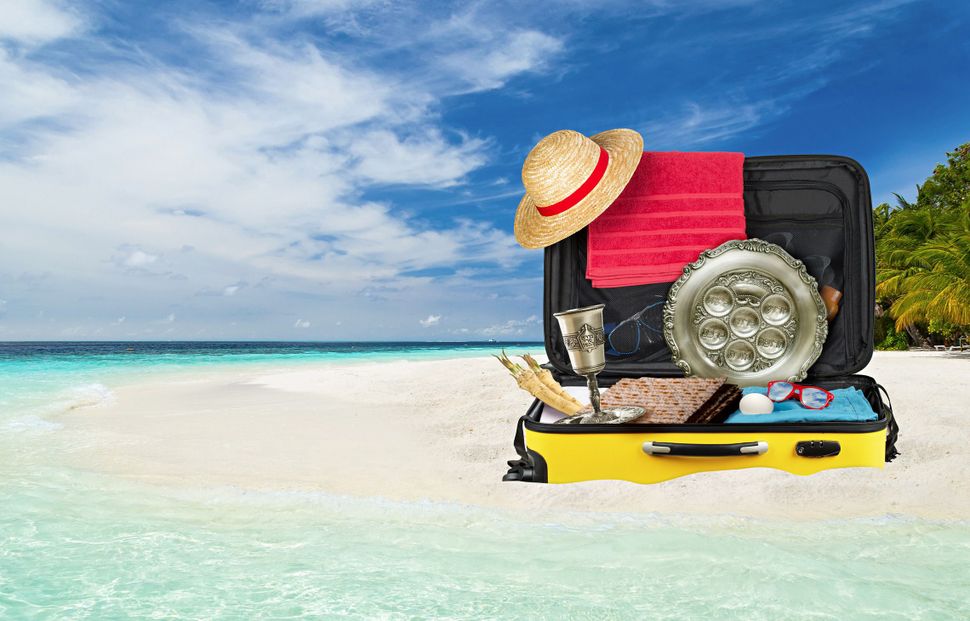 This Passover season, an increasing number of Jews will not be gathered around Bubbe’s dining room table for the first Seder. Instead, they will be at luxurious resorts, from Aruba to the Austrian Alps; some may even be going on an African safari.

The rest of the travel industry may be flat, but Passover packages are booming. In an era of dual-career couples and scattered families, it’s a way to keep the tradition, but without all the work.

“It’s really a holiday with a vacation attached,” said Menachem Lubinsky, editor of Kosher Today, a trade newspaper. “If you can lock up the house and not have to go through all that preparation, why not?”

According to the 2013 survey from the Pew Research Center, 70% of American Jews participate in a Seder. That’s more than any other religious practice, including fasting on Yom Kippur (53%) and lighting Sabbath candles (23%). For observant Jews, Passover requires a far more Herculean effort than merely preparing a meal. The house must be purged of any food containing leavening agents, which means scouring refrigerators and shelves and disassembling the stove until not so much as a crumb can be found. The cleaning frenzy may extend to any objects in one’s possession — the car, the computer keyboard, even the soles of shoes. Only then are special dishes and utensils — used only for this one week a year — hauled out of storage.

While there have always been a handful of mom and pop hotels that catered to a kosher clientele, the exodus to upscale destinations started gaining momentum in the mid-1990s. This year, an estimated 120,000 Jews will be occupying 40,000 hotel rooms world-wide for Passover, said Raphi Bloom, owner of TotallyJewishTravel.com, which has seen a 33% spike in web traffic from a year ago.

The posh Passover would have amazed earlier generations that decamped to the Catskills or to Miami Beach, just grateful to have someone else make the gefilte fish. Today, foodies are enticed by celebrity chefs for whom the prohibition against leavening is no obstacle to creativity.

“It can get quite lavish. There’s just been an explosion of Passover products; chefs have a lot more to work with,” Lubinsky said. “You can even get [kosher for Passover] croutons.”

Between meals, the array of activities is equally impressive. The Atlantis in the Bahamas boasts 11 swimming pools. (Resorts appealing to different levels of Orthodoxy offer both “mixed” and single-sex swimming times.) The Four Seasons, in Whistler, British Columbia, promotes its great skiing, while the St. Regis (now Monarch Beach) in Dana Point, California, touted what must be the most unusual perk of all: kosher lunch with the Kardashians.

More frugal tourists can find packages with fewer amenities — such as the GHT Oasis Park & Spa near Barcelona, starting at about $1,400 per person. Europe makes sense not just for those who are budget-minded, but also for Israelis who have embraced what has primarily been a North American trend.

“During the last two years we have seen a massive jump in Israelis traveling abroad for kosher vacations — especially Pesach,” said Bloom, who added a Hebrew website in 2014 (www.TJT.co.il). “This is a huge growth area which the European hotels have taken advantage of and the American and Caribbean hotels have yet to appreciate.”

But the exotic retreats generate the most buzz — such as the five-star Arabella Resort, in South Africa, which offers “close encounters with rhinos, lions, buffalo… and more!” For wealthy clients, the Passover getaway seems immune to the economy.

“Even after the recession, our business has held up,” said Lynda Clare, co-owner of Presidential Kosher Holidays, which runs programs at the Fairmont Scottsdale Princess, in Arizona, and the Fairmont Mayakoba, in Cancun. Between the two properties, Clare has booked more than 1,200 guests, with prices starting at about $5,000 per person for nine nights, based on double occupancy.

“Why? Because people will always celebrate Passover,” said Clare, who estimates that 90% of her business comes from repeat guests.

Stanley Bernstein has spent 24 Passovers with the Presidential Kosher programs, in venues such as Aruba and Puerto Rico. This year, the New Rochelle attorney is host to a group of 14 to the Scottsdale Princess — and the children he brought as infants are now bringing babies of their own. It’s a long way from when his own grandparents took him to the Monsey Park Hotel in New Jersey.

“The Passover world has changed,” he said. “It’s a perfect storm in the most positive sense. It takes a lot of work off your hands and, at the same time, the family gets together for 10 days, which could never otherwise happen. Everyone looks forward to it… and every year, these programs find a way to up their game.”

Of course, as in any business, there are pitfalls. Prime Experience canceled its program at the La Jolla Hilton, leaving clients scrambling to find accommodations at the 11th hour. South Florida has continued to be hurt by the Zika scare, but bookings have picked up in Orlando, Florida, where theme parks are an attraction for the non-Yom Tov days, and the mosquito-borne illness was never a factor.

The uptick is not only at the Orlando hotels, but also in the “hundreds of houses” rented out for the holiday, according to Kosher Today, which noted that many New York-based supermarkets are also offering delivery services to Florida.

Pnina Levin, a social worker from Chicago, has rented a seven-bedroom house in Orlando for the past three Passovers. It has been the gathering place for her parents, six adult children and their spouses, and her grandchildren. “You walk into a clean house that has already been koshered [made fit for Passover]. The kids are in the pool with their cousins… and when we leave, someone else cleans up. What could be better?”

Bonnie Rubin is a former reporter for the Chicago Tribune.