Why ScarJo’s Whitewashed ‘Ghost’ Is A Jewish Assimilation Parable 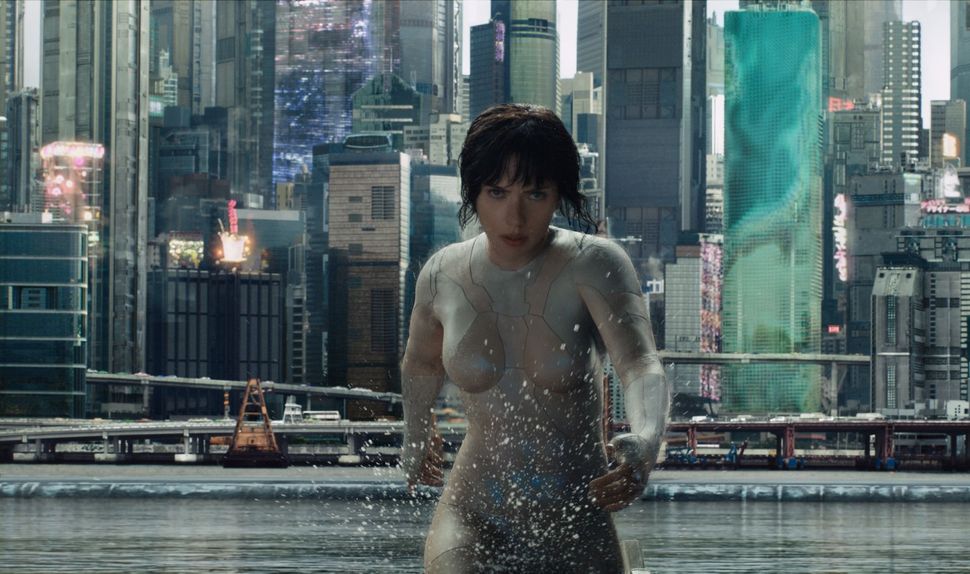 Image by Ghost In The Shell

“When we see our uniqueness as a virtue, only then can we find peace,” Chief Daisuke Aramaki (Takeshi Kitano) declares in the new 2017 live action reboot of the classic Japanese anime “Ghost in the Shell.” It’s an ironic moral for a film that is already infamous for its whitewashed casting. If the film really saw uniqueness as a virtue, it could have chosen a Japanese-American actress to play the Japanese lead role of Major. Instead, the filmmakers did the least unique thing possible, and cast Scarlett Johansson as the android with the perfect body, because Scarlett Johansson is always playing some android or alien or superhero with the perfect body. Ignoring its own moral lesson, the film erases Major’s particular history, and replaces it with the same default white Aryan ideal as ever.

Johansson herself, though, isn’t technically an Aryan at all. Her mother is Jewish. The film not only whitewashes Major’s Japanese-ness; it also whitewashes Johansson’s Jewishness. Asians and Jews have both been considered model minorities; both have been told that if they work hard and fit in, they can be accepted into whiteness. “Ghost in the Shell,” inadvertently, shows exactly what that promise is worth.

“Ghost in the Shell” is a near future cyberpunk parable about identity and self. Major is a human whose consciousness has been turned into data and placed, like a ghost, into a superpowered android shell. In an American context, with a Jewish actor, it’s easy to see this as a metaphor for cultural and racial assimilation.

Major’s memories are manipulated by the scientists who give her the android body. She is cut off from her past and from her family. “Everyone around me seems connected,” she says, but she herself feels nothing. In order to become perfect and white, she loses her ethnic specificity, not to mention much of her affect. Johansson wanders through the film blankly, a cipher who barely reciprocates when the scientist who constructed her expresses affection or concern. In one odd but telling scene, Major hires a black sex worker, asking her what it’s like to be human. To become white, Major has lost her own roots, so she people projects a nostalgic fetish of authenticity onto a black woman. When you’ve lost touch with your own humanity, you dehumanize others.

The assimilation narrative is not an imposition; the filmmakers are well aware of it — not in a Jewish context, but in an Asian-American one. It turns out that Major’s original, human body was Japanese; her name was Motoko Kusanagi. There is even a scene where the white Major reunites with her Japanese mother (Kaori Momoi), who thought her daughter was dead. Mom talks about how “wild” her daughter was, while Major continues to stare blankly across the unbridgeable distance between human and android, which is also, metaphorically, the distance between a mother still linked to a Japanese past and an ambivalently assimilated second generation.

The theme of assimilation is there, but the film struggles to handle it in a meaningful way As Japanese actress Atsuko Okatsuka pointed out at the Hollywood Reporter, the meeting between Major and her mother is awkward and “generic.” Beyond the mother’s appearance and slight accent, there’s no sense of cultural difference or tension, no food or personal rituals which bring back memories for Major. There is also, as Okatsuka says, no sense of shame about having abandoned the past, or about having failed to abandon it completely enough.

The story about assimilation has itself been assimilated. Major is supposed to be reconnecting with her Japanese past, but the Japanese past is still meaningless and effectively erased. To explore the pain between Major and her mother would be to question the demand for whiteness — and so to critique the film’s casting choices. “Ghost in the Shell” is paralyzed by its own hypocrisy.

Jewish people and Asian people don’t have the same relationship to whiteness, of course. White Jewish people are for the most part not marked in Hollywood. Johansson can play white characters, or for that matter Asian characters, because she is not seen as Jewish, but as white. Asian actresses remain restricted because Asian bodies are not as “universal,” as Jennifer Phang’s much smarter, much bleaker 2015 body-swapping film Advantageous put it.

Still, “Ghost in the Shell” suggests that the experience of Jewish people and Asian people in America has some parallels.

As James Baldwin noted, the “price of the ticket” to whiteness for all ethnic groups is forgetting your own past. To be white, in “Ghost in the Shell,” Johansson has to stop being Jewish, just as to be the perfect android Major, Motoko has to stop being Asian.

Major is a model minority because she is a paragon; she is mentally and physically perfect, and is selflessly devoted to destroying “terrorists,” the evil enemies of society and of her corporate overlords. But she is also a model minority in that she’s a model, a mannequin, a shell. She’s tolerated as long as she’s a thing, acting as she was made to act. When she starts to remember her past as a human being, with human particularity, she becomes “disposable.”

“Ghost in the Shell” is supposedly set in a future Japan, but really it shows a distinctly American present, in which Jewish people and Asian people will only be valued insofar as they can make themselves white. That scramble for assimilation can be seen as a zero sum game; Johansson got the part, after all, and Asian actresses did not.

Jewish memory and Jewish identity, though, can also be a way to see that uniqueness is a virtue. From that perspective, a threat to Asian uniqueness is a threat to Jewish uniqueness as well. Without that solidarity, Jews may wake up one day to find themselves turned into ghosts, looking out blankly from inside a white shell.

Why ScarJo’s Whitewashed ‘Ghost’ Is A Jewish Assimilation Parable