The Secret Jewish History of The J. Geils Band 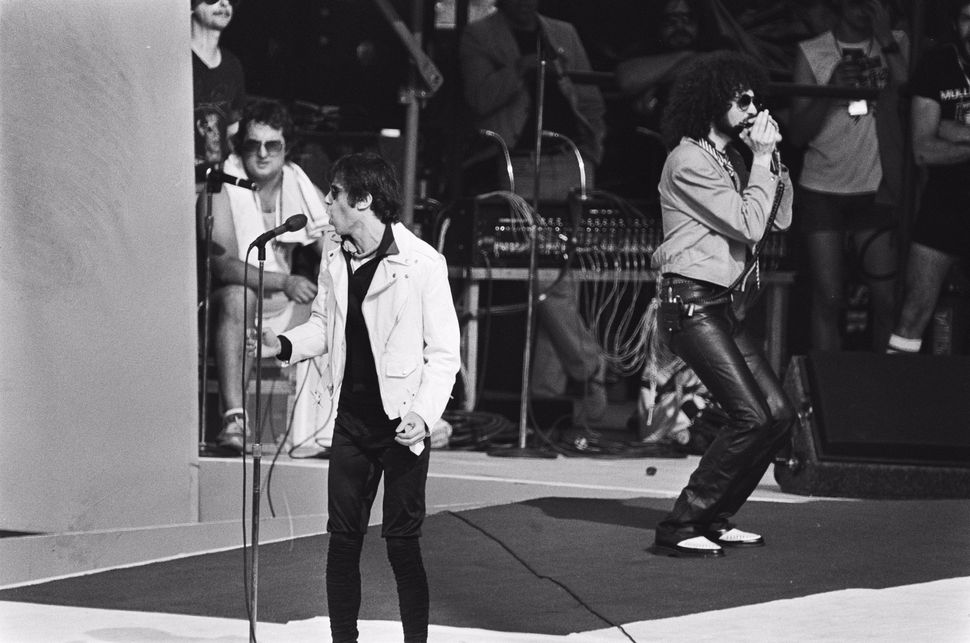 Guitarist John “Jay” Geils Jr., a jazz-minded musician who formed a blues trio in college that would evolve into the hit-making rock group the J. Geils Band, died on Tuesday at age 71 at home in Groton, Mass. The group was formed in Boston in 1969, and remained a regional powerhouse until it hit big on the pop charts about a decade later with songs including “Love Stinks,” “Freeze-Frame,” and “Centerfold.”

While the group would bear his name and be driven by his tasty, blues-rock guitar licks, for most of his career Geils performed in the shadows of his bandmates, somewhat a fish out of water.

For one, Geils was never enamored of rock ‘n’ roll. He was brought up on jazz, a first love to which he returned in his later years after dropping out of the reunited J. Geils Band in 2012. In college at Worcester Polytechnic Institute, he formed an acoustic blues trio with classmates Danny Klein and Richard Salwitz. When the three moved to Boston, they fell in with a crowd of hard-rocking R&B musicians, merging with members of a group called the Hallucinations, fronted by singer Peter Wolf and powered by drummer Stephen Jo Bladd. With the addition of keyboardist Seth Justman, Geils found himself playing in a full-fledged, hard-edged, Rolling Stones-style rock band, ceding control to frontman Wolf, who was already a celebrity in Boston due to his stint as a disc jockey at WBCN, the city’s premier FM radio station, and to the songwriting duo of Wolf and Justman.

Geils also found himself the odd-man out in a sextet in which he was the only gentile. His pals from college were a Bronx-born, N.J.-raised bassist Danny Klein, and harmonica player Salwitz, whose stage name was Magic Dick, was a nice Jewish boy from Pittsfield, Mass. Peter Wolf – born Peter Blankenfeld – hailed from the Bronx and Seth Justman from Atlantic City. Drummer Stephen Jo Bladd was the only original Bostonian in a group that would own Boston’s hard-rock crown in the early 1970s before ceding it to Aerosmith – whose members were big fans of the J. Geils Band.

One of the reasons Geils and his trio were drawn to Boston was the active music scene centered around the South End nightclub called the Boston Tea Party – Beantown’s answer to New York City’s Fillmore East and San Francisco’s Fillmore West, both founded by Holocaust survivor Bill Graham. Wolf’s R&B group, the Hallucinations, frequently gigged at the club, located in a century-old building originally home to a Unitarian Meeting House that curiously sported a huge Star of David window looking out on the street, leading many to assume falsely that the building was at one time an Orthodox synagogue.

The J. Geils Band initially called it quits in the mid-1980s, and then reunited for a tour in 1999. They continued playing on and off for the next decade or so, before Geils left the band for good in 2012. He then filed a lawsuit over the use of the name “J. Geils Band” by the other musicians, claiming ownership of the name in a trademark case that wasn’t as clear-cut as one might think. The suit was finally settled in 2015, with Geils allowed to perform under his own name and the others free to perform without Jay Geils as the J. Geils Band.

Seth Rogovoy is a contributing editor at the Forward. He frequently writes about the affinities between popular and Jewish culture.

The Secret Jewish History of The J. Geils Band