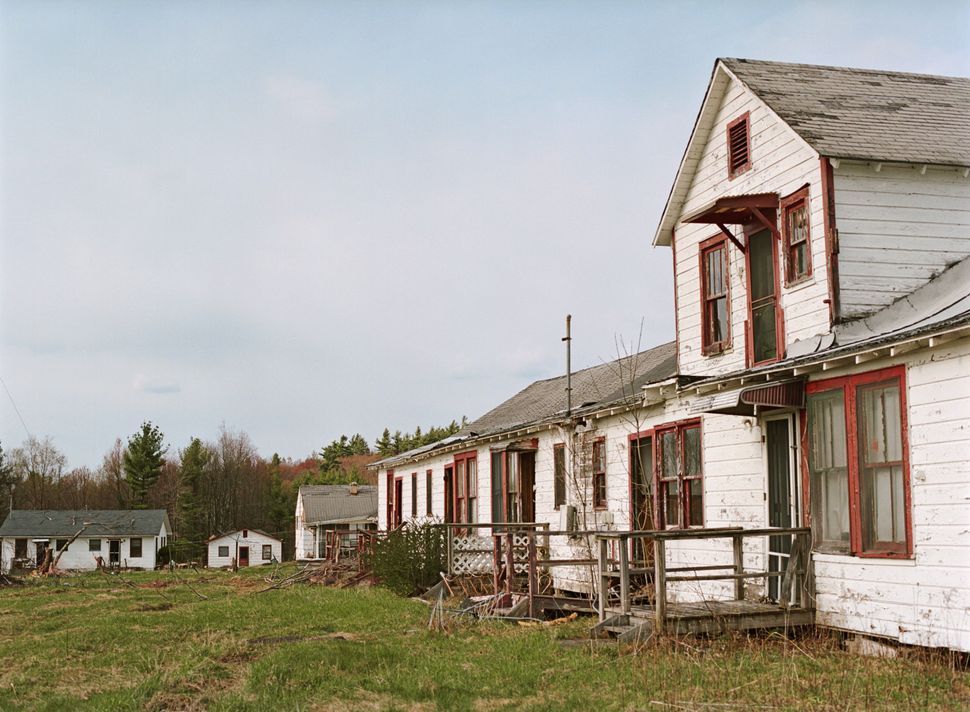 I grew up in the “mountains,” or as others called it “the country.” Throughout my entire life, family, friends and neighbors uttered these words as if no other mountains or country existed anywhere else in the wide world. Five years ago when I began working on “The Borscht Belt: Revisiting the Remains of America’s Jewish Vacationland,” those nicknames resounded in my mind like an old song. Since the book was released last October, I’ve become all the more convinced that for thousands of people those boldfaced monikers contains a most absolute truth. The mere mention of the term ‘Borscht Belt’ prompts recollections and myriad warm and humorous stories from those who lived, worked, or vacationed there. This has been true for me, too.

The Borscht Belt was a predominantly Jewish American vacation destination located 90 miles from New York City in Sullivan and Ulster Counties. It offered its visitors leisure, entertainment and copious amounts of food. In its heyday, the region comprised over 500 hotels and 50,000 bungalow colonies. This quest for leisure and culture that reigned supreme for a handful of decades forged countless relationships, friendships, collective memories, personal memories and histories – many of which extend to the present day.

My paternal grandparents met while my grandmother was hitchhiking with her sister on one of the back roads of Sullivan County. A day of back street gallivanting turned into decades spent at bungalow colonies known as the Irvington and East Pond and at hotels like The Concord and Kutsher’s. My maternal grandparents met at a Chinese restaurant Brooklyn, but went to the Nevele on their honeymoon. The following decades were spent at a bungalow colony in Wawarsing and another colony, known as Rosmarins, which is still open.

I was born in the fall of 1980. In 1986, my father accepted a job and moved our family up to the Catskills, the town of Kiamesha Lake, NY. I believe he did so because of his own attachment to the regions and his desire to create a new set of memories in “the country” with his own growing family. When I was a child, we lived in between Kutsher’s and the Concord. I can still recall going to each hotel on the weekends. Upon seeing the entranceway to Kutsher’s — a white awning adorned with a larger than life gold sign, or the pine tree lined driveway leading up to the Concord — I knew it was going to be a day full of fun. Although my family and I were not guests at these hotels, we strolled in as if we were. At the time, the hotels in my neighborhood experienced a mere fraction of the foot traffic they had once accommodated. On a typical afternoon after a visit to the card room to greet my Grandpa Jack (who was a proud card shark), I would sit in on a game of bingo or jump feet-first into the icy-hot tub located in the women’s locker room, known to most as the cold plunge, with my Grandma Ruth.

As a teenager, one of my first jobs was as a lifeguard at the Concord Hotel. I worked at the Concord until the fall of 1996, when the hotel officially closed its doors. My memories of those days of fun and family, in all of the seasons, are full. Most who know the era realize, probably now more than ever, what a tremendous impact it had on their lives, memories but also of the strong hold the Borscht Belt still exerts on the American Jewish mind.

Reflecting on that time and on the experience of making this book, it’s been a captivating journey – one that has stirred up a gamut of emotions. The result is a project that’s taught me much about the “mountains” where I grew up, and in turn, a body of work that has stimulated a consideration of their past, present and imminent future.

Though my topic is the history of the Borscht Belt, my photographs examine its history though a very contemporary lens. The images depict the physical spaces of Borscht Belt architecture and locales — hotel and bungalow colony exteriors and interiors, lobbies, pools, dining rooms, guest rooms, showrooms and stages. The scenes in the book were captured just as I found them. While identifying myself as a photographer, most of the time I felt like an archaeologist, searching for remnants and evidence of the past. In its apparent death, amid an environment of architectural remnants and relics, the Borscht Belt has generated new life. The photographs are essentially still lifes of sorts, arranged by time, nature and chance.

For many, the Borscht Belt’s remains are eyesores, looming architectural creatures scattered throughout the landscape signaling the failure and ultimate demise of a beloved and prosperous era. Upon reconsidering these structures of past, I felt compelled to shed light on the places that had grown dark. Since taking these photographs, many of the “ruins” have since collapsed or have been demolished, with no trace in sight. The photographs I’ve made, no mater the pathos that runs through their ultimate narratives, are proof of the Borscht Belt’s existence and its endurance.

“The Borscht Belt” is a personal project depicting the landscape of my childhood and the childhoods of hundreds of thousands of people who vacationed, celebrated and worked at its resorts and bungalow colonies. In some ways, the book is an elegy to the Borscht Belt but in the same breath, it is a celebration of its former glory — while evoking discussion about loss, memory, and the process of time and change on the built environment.

Since its release, I’ve watched the book pull on the heartstrings of many, particularly those who have spent time in the region. It’s similar to seeing a photograph of a person who has passed or of a love lost long ago. But “The Borscht Belt” is not a nostalgic collection; instead it deviates from the typical Borscht Belt narrative of kitsch, memoir, historical account and archival photographic anthologies.

The landscape around us is continually changing, no matter where we reside. These modifications, when we are aware of them, reveal changes in ourselves too. I hope those who look at or buy the book see the respect for the region that I carried with me along the way. The Catskills has long beckoned humankind; in fact, it did so hundreds of years before it welcomed American Jews. Much of this attraction lies in its sheer beauty. Its proximity to NYC also helped. I specifically subtitled the book “Revisiting the Remains of America’s Jewish Vacationland.” I’d like people to reconsider the region, whether they take a ride to visit one or a few of many small towns and see the new restaurants, businesses, converted bungalow colonies, motels and hotels constantly springing up. Or simply revisit their past through the pages of the book.

Marisa Scheinfeld is the author of “The Borscht Belt: Revisiting the Remains of America’s Jewish Vacationland.” On May 17th she will be speaking at the New York Public Library and on September 28th at Baruch College. For future speaking engagements in Westchester, NY, New Jersey, Maryland, the Catskills, and Long Island, check the book’s website. Follow her on Twitter, @marisaschein or Instagram, @marisascheinfeld