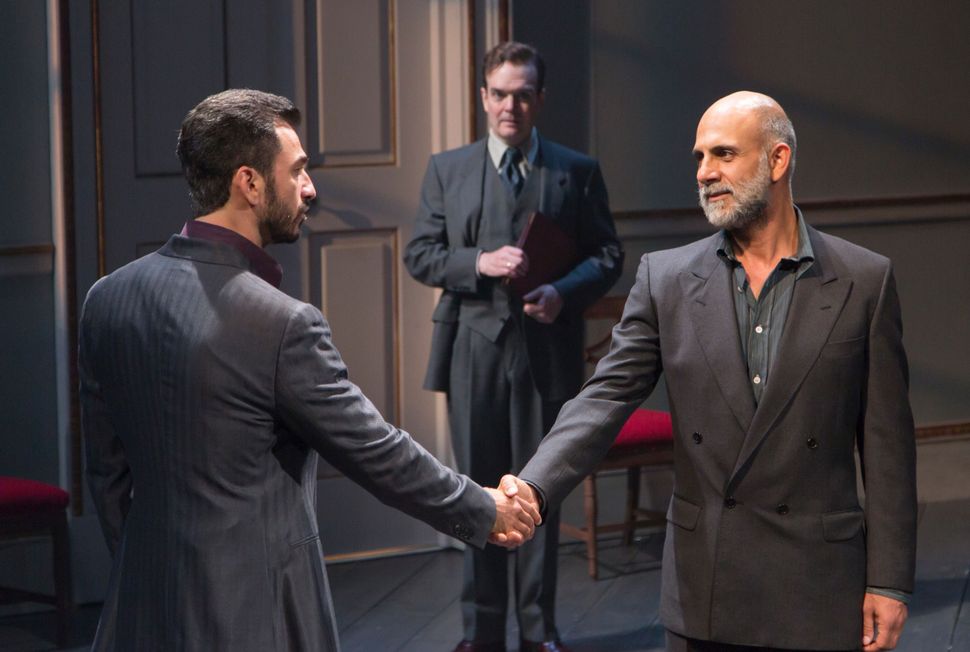 To whatever extent there is an argument to be made that Terje Rød-Larsen is Israel’s greatest diplomat — it’s a small extent: he is neither Israeli nor a diplomat, and his great triumph has been rendered essentially defunct — it is currently being made where it should be, on the Upper West Side of Manhattan.

Rød-Larsen is the Norwegian sociologist and think-tanker who in 1992 ginned up the secret so-called Oslo channel, which provided for the first-ever face-to-face contacts between Israelis and the Palestine Liberation Organization and led, shockingly quickly, to the 1993 Oslo Accords. He and his wife, Mona Juul, an official in the Norwegian Foreign Ministry, are at the center of that story, and, as portrayed with incredible charm and dedication by Jefferson Mays and Jennifer Ehle, they’re at the center of J.T. Rogers’s play “Oslo,” a sort of true-life fable and a deft dramatization of the hard, secret, behind-the-scenes work that brought Arafat, Rabin, and a beaming Bill Clinton to the South Lawn.

It’s all basically true, and its details are largely unknown. (Playwright J.T. Rogers was introduced to Rød-Larsen by director Bartlett Sher, and followed up with his own research.) After an off-Broadway run at Lincoln Center Theater’s Mitzi Newhouse last summer, it re-opened tonight at the Vivian Beaumont, LCT’s Broadway house. That means that for the second time in less than a year, LCT subscribers are being treated to an intricately crafted, beautifully staged, movingly acted tribute to the virtues of optimism, compromise, and conversation.

It prompts a chicken-and-egg question about audience and message: Is the playwright making that argument to his audience, or telling the only story that’s commercially viable among liberal, J Streeting New Yorkers? And in it’s latest staging, it prompts another realization: Its case for naïve optimism feels very different after last November, our own special nakba, than it did before.

The play opens at a dinner party that introduces us to Terje and Mona, and also to the isolated and incestuous world in which they live. They’re toasting John Jorgen Hurst (T. Ryder Smith), who is about to become Norway’s foreign minister, for whom Juul ultimately works, and by his wife, Marianne Heiberg (Henny Russell), who works for Rød-Larsen. (“In Norway we take nepotism to an entirely new level,” confides Mona, who serves as a narrator and guide for the audience.) The phones in Terje and Mona’s flat starts ringing, and that’s when we learn that the couple has been conducting clandestine diplomacy.

Terje, an academic who runs a research institute, has a different model for looking at negotiations. It seems obvious to us now, because it’s the concept that the Oslo process — getting to the agreement, which we’re watching here, plus what was supposed to come after — is premised upon: the gradual. “This new model, my model, is rooted not in the organizational but in the personal,” Terje says in a flashback to when he was Mona’s professor. “A process of negotiation allowing the most implacable of adversaries to focus on a single issue of contention, resolve it, then move on to the next single issue, as they gradually build a bond of trust.” He has enlisted senior figures in the PLO and the Israeli Labor party to take a shot at his different way, even as Washington-led formal talks are going nowhere.

As the play progresses, skillfully interweaving scenes in Oslo and in Tel Aviv, in forward progress and in the past, we meet the players. Yossi Beilin (Adam Dannheisser), a Shimon Peres protégé, gives the unofficial go-ahead for the Israelis, and sends along two full-deniability amateur envoys, a pair of goofy, jokey University of Haifa economics professors played by Daniel Oreskes and Daniel Jenkins. The Palestinians are represented by Ahmed Qurie, called Abu Ala (Anthony Aziz), the PLO’s finance minister, a technocrat with Arafat’s ear, and Hassan Asfour (Dariush Kashani), a PLO negotiator sporting communist slogans and a black leather jacket. They meet, repeatedly, at a secluded Norwegian estate, where, true to Terje’s plan, camaraderie develops and progress is made. Eventually, harder-nosed Israelis are called in to hone the deal, and, finally, in a tense late-night phone call to Tunis from Shimon Peres’s hotel room in Stockholm, in which the Israeli foreign minister (also played by Oreskes, with the right tone of self-regarding eminence) and the Palestinian chairman reach an agreement.

Rogers sometimes paints with a broad brush. The first round of Jewish negotiators are shticky goofballs; the Israeli closers are swaggering sabras; and the Palestinians have hair-trigger tempers and are always shouting about injustice. People say things like “I have never met an Israeli, face to face” and “you don’t make peace with the people you have dinner parties with.” But his play is a success because it does indeed reveal the emotional truth of these people and this process, and that truth lends tension and drama to a story whose ending we already know. And Bart Sher, who by now knows the Beaumont stage better than anyone keeps the storytelling taut, balancing its realism with the wonder and majesty of the negotiators’ accomplishment.

But, really, it’s Terje who drives the thing forward. He is determined to be a facilitator, an honest broker, the man who creates the space in which negotiations can happen but not a negotiator himself. At the same time, he becomes so invested in the success of the effort that he regularly needs to be reminded that it’s not actually about him. Jefferson Mays embodies the complexities of this man — the charm that keeps things moving, the dedication, and also the self-regard. (And Jennifer Ehle is equally impressive as the wife who keeps him on track.)

Ultimately, though, Oslo’s Terje is a goofy idealist who’s lucky enough to be proved right. Last summer, when optimism seemed on the march everywhere except in Israel, the play felt a bit behind the times, an artifact of an era when it seemed not crazy to think Israelis and Palestinians working together might yield progress. “Oslo” seemed too Oslo-era. Now, when all of the world’s worst impulses are on display, it instead feels inspiring. If an odd-duck Norwegian egghead could once bring Israelis and Palestinians together, maybe we can hold out some hope now, too.

Jesse Oxfeld has written about theater for Town & Country and New York Magazine. Follow him on Twitter, @joxfeld