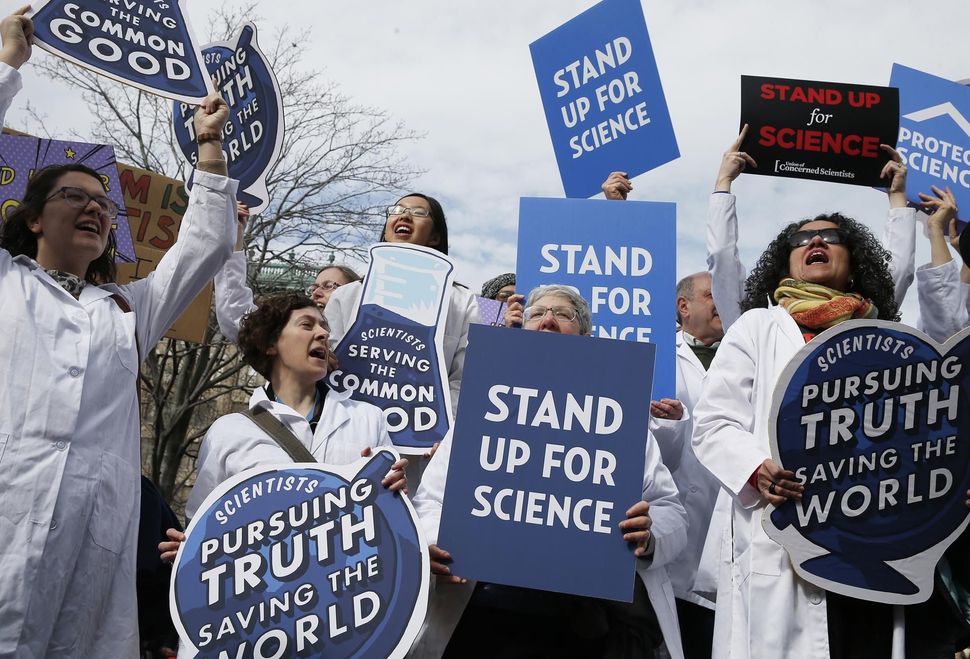 David Mogul is marching for more funding. Roy Plotnick is worried about the long-term effects on innovation and Ariel Anbar want to show that “those of us dedicated to the pursuit of new knowledge are not locked away in an ivory tower lab.”

The April 22 March for Science — which is taking place in Washington and 500 other sites — has been embroiled in controversy over everything from diversity (not enough) to the lack of an appropriate unifying symbol (where are the Pussyhats?). But nothing has generated as much debate as why scientists are marching and whether they should be involved in politics at all.

Mogul, Plotnick and Anbar — three Jewish scientists who will participate in Saturday’s event — see no conflict. Their religion, profession and politics are all inextricably intertwined.

“Judaism and science both teach us that there’s no one way of looking at things,” said Mogul, a professor of biomedical engineering at Illinois Institute of Technology, “There’s always another perspective.”

Officially, the mission of the March for Science is the first step towards a “global movement to defend the vital role science plays in our health, safety, economies and governments,” according to its website.

The march is billed as non-partisan, but many see the event as less pro-science and more anti-Trump.

Participants cite recent White House positions that show an administration increasingly hostile to the scientific community — including rolling back environmental regulations, the proposed slashing of research budgets and barring scientists working for some government agencies from communicating with the public.

It was the last move that “really lit a fire under us” said Dr. Caroline Weinberg, a public health researcher told the Washington Post in January.

Inspired by the success of the Women’s March in January, Weinberg connected with other scientists on social media, who shared her concerns that “we need a march of our own.”

Now, just three months later, their Facebook page has more than a half-million likes and satellite events are planned from Tennessee to Taiwan. More significantly, dozens of scientific groups have signed on, including the American Association for the Advancement of Science, signifying an unprecedented level of political activism for a body typically associated with publishing dry academic journals.

Organizers hope the event is more than just a one-day rally with catchy slogans (“Science not Silence,” “Extinction is Forever,” “Evidence not Opinions”) but an enduring movement.

Almost immediately, disagreements erupted over the march, as well as the larger issue of the role of science. Steven Pinker, the well-known Harvard cognitive scientist, fired the first salvo by tweeting that it compromised neutrality, injecting “PC/ identity politics/hard-left rhetoric.”

Scientists, though, have never been insulated from politics, say advocates, noting Galileo’s imprisonment or the fact that Albert Einstein urged Franklin Roosevelt to develop the atom bomb. More recently, science and lawmakers have clashed over everything from evolution to end-of-life issues.

“We cannot pretend that scientists are somehow non-political, “said Anbar, a molecular scientist who will be marching in red-state Arizona. “Too many of us for too long have acted as though it is with the result that much of the public has no idea of what we do or why.”

Mogul, who will be marching in Chicago, sees Americans attitudes as going beyond detachment to “genuine disdain,” he lamented. “People just don’t see the benefit or relevance that science has on their lives.”

He cited Trump’s proposed “gutting” of the National Institutes of Health by $6 billion — nearly 20 percent of its budget — and the Department of Energy’s Office of Science by nearly the same percentage as proof of both poor public policy and the public’s dismissiveness.

“Many labs have had to close up shop…and even big-name institutions have had grant applications thrown back in their faces.”

Plotnick, a paleontologist on sabbatical at Yale University, doesn’t think enduring change will happen unless science can build on the momentum. Like the Women’s March, he said, “what is needed is continued and organized follow-up. We need scientists getting involved in politics and continuing to engage the public to get the message out.”

All three see their Jewishness as compatible with their professions, as they strive to make order out of chaos and explain the mysteries of the world.

However, nearly 6 in 10 adults hold the belief that religion and science are incompatible, according to a recent Pew Research Center survey. For Jews, the disconnect is even more pronounced, with Einstein, Jonas Salk and Nobel-prize winning physicist Richard Feynman just a few of the notable Jewish scientists who rejected or were ambivalent about their faith.

The New York-based organization has recently awarded grants to 11 synagogues of all denominations to examine the most pressing questions surrounding religion and science – from the Big Bang Theory to Free Will. The project, funded by the John Templeton Foundation is s part of broader effort to dismantle the walls between the two communities.

Bonnie Miller Rubin is a former writer for the Chicago Tribune.