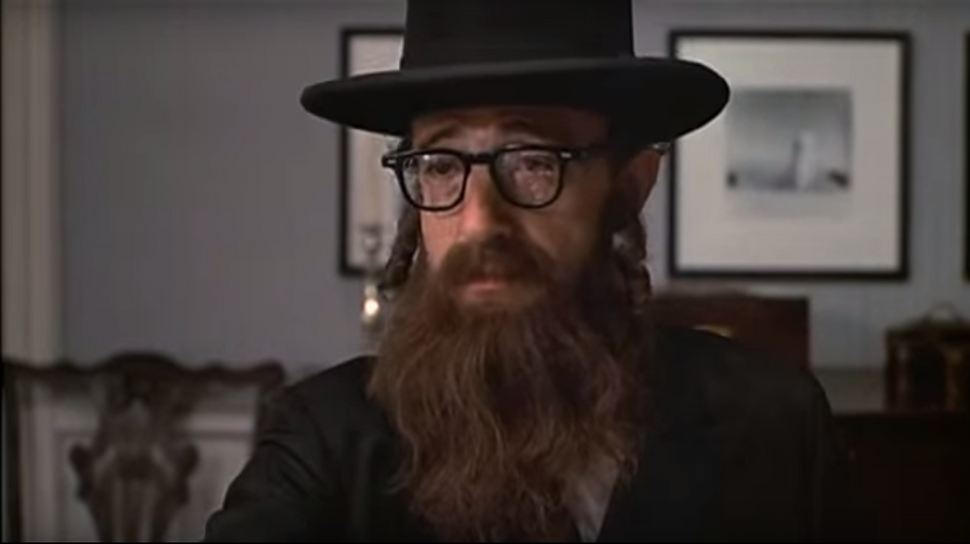 Woody Allen’s “Annie Hall” turned forty this week. It is, arguably, Allen’s most influential film, his funniest as well – a masterclass not only in cinematography and screenwriting, but directing and acting as well. Jordan Hoffman over at The Guardian has compiled a list of the films forty funniest moments (how he distilled it down to forty is a feat in itself), and Vanity Fair has an interesting tribute which offers insight into the history of the film, which was originally much longer and looser in structure (the famed lost scene of the New York Knicks playing against a team comprised of famous philosophers is my own personal Byron’s journal).

“Annie Hall,” like so many of Allen’s films, is incredibly Jewish. His work is indebted to the Marx Brothers, S.J. Perelman, Borscht Belt comedians, and the music of the Gershwins, so, to a certain degree, a streak of Jewishness runs through all of his work. But in “Annie Hall,” it is more explicitly present than in some of his other films. So, instead of futilely attempting to choose the best or funniest scene from the movie, here is a futile attempt at choosing the most Jewish scene from an eminently Jewish film.

The obvious choice would be the Easter Dinner scene, in which “Grammy Hall” envisions Allen as a chassid and we’re given the split screen contrast between the staid, WASPy Hall family dinner and the chaotic Jewish Allen family dinner (the conversation in the Allen family dinner revolving around peoples’ various ailments is spot on). It definitely speaks to the negative definition of Judaism at play in America – like other assimilated peoples, specifically in a multi-ethnic nation like America, Jews, in order to reinforce a slipping sense of identity, define themselves against the predominant Protestant culture.

But that’s not the most Jewish scene. Nor is the scene in which Allen recites various experiences of perceived anti-Semitism to Tony Roberts (“Wagner, Max, Wagner!”), which gets at that very Jewish ingrained sense of persecution that, with good reason, has become acutely sensitive and highly developed.

No, for my money, the most Jewish scene is not explicitly Jewish at all, rather, it’s the bookstore scene, in which Allen buys Diane Keaton two books about death (“Death in Western Thought” and “The Denial of Death”). In the scene, Allen expounds on his “pessimistic view of life” – “Life is divided up into the horrible and miserable, those are the two categories. The horrible would be like terminal cases, blind people, cripples – I don’t know how they get through life, it’s amazing to me. And the miserable is everyone else. So when you go through life you should be thankful that you’re miserable.”

For me, this short scene (the joke is somewhat related in content to the opening joke of the film “the food at this place is really terrible, and such small portions”) gets at the heart of a lot of Jewish comedy – finding laughter in the dark. Jewish humor is not “dark humor” per se, but something a bit different. It is self deprecating, but in an existential sense. It’s quick, fast talking, neurotic or manic, or both (a good contemporary example – think Vince Vaughn with a Brooklyn accent and a wittier script). It has a tinge of that Central European delight in paradox (Kafka considered his stories to be uproariously funny – and a few of them are). Even in its silliest moments, there’s a certain erudition lurking beneath the surface.

The scene is Jewish for the above qualities, but what really ties it together is the last line of the joke. Yes, life is miserable, but you better be thankful for it all the same. It’s not just that Jewish comedy finds laughter in the dark, it’s that, without the dark, there wouldn’t be much to laugh at anyway. We’re not funny despite our history, but because of it. It’s a survival mechanism, yes, but in the end, after such a lugubrious history, is there really any other choice but laughter? Had the Bible been written in the Catskills, we’d have to imagine Job laughing in the dust (“such small portions” he might complain to God). This most Jewish of scenes in a most Jewish movie gives us a most Jewish way of understanding the Jewish people: We’re miserable, but as we know, it could be worse – so, we’re miserable, that’s enough.