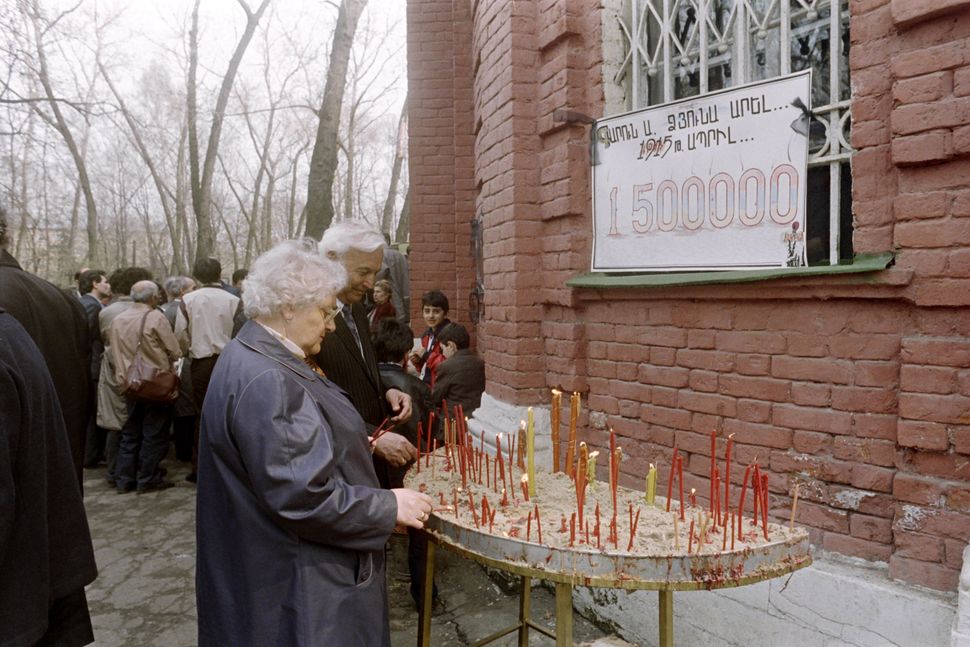 Today is not only Yom HaShoah, but also Armenian Genocide Remembrance Day. As I have previously discussed, the Armenian Genocide, a crime for which the term “genocide” was coined by Raphael Lemkin, has gone unacknowledged by Turkey, which perpetrated the genocide, and also by countries such as Israel, the U.K., and the United States. In accordance with the longstanding American tradition of genocide denial, President Trump issued this statement:

Statement by President Donald J. Trump on Armenian Remembrance Day 2017 Today, we remember and honor the memory of those who suffered during the Meds Yeghern, one of the worst mass atrocities of the 20th century. Beginning in 1915, one and a half million Armenians were deported, massacred, or marched to their deaths in the final years of the Ottoman Empire. I join the Armenian community in America and around the world in mourning the loss of innocent lives and the suffering endured by so many. As we reflect on this dark chapter of human history, we also recognize the resilience of the Armenian people. Many built new lives in the United States and made indelible contributions to our country, while cherishing memories of the historic homeland in which their ancestors established one of the great civilizations of antiquity. We must remember atrocities to prevent them from occurring again. We welcome the efforts of Turks and Armenians to acknowledge and reckon with painful history, which is a critical step toward building a foundation for a more just and tolerant future

This statement, like all previous statements by sitting U.S. Presidents, is woefully inadequate. Starting with the title – this is an “Armenian Remembrance Day” statement. The word “genocide” has, unsurprisingly, been scrubbed (instead, Trump uses the phrase Meds Yeghern which literally translates to “great calamity” – the equivalent of exclusively referring to the Holocaust as the Shoah), but the resulting phrase makes it sound as if Armenians had been erased from the earth – they have not. Indeed, the importance of today, both in terms of Yom HaShoah and Armenian Genocide Remembrance Day, is to remember not that Jews or Armenians still exist (this much is obvious), but to remember that, at one point in history, there was an attempt to eradicate them from the earth – we remember the dead, but it is equally important that we remember the murder as well.

This, of course, can be chalked up to bad copywriting. But the rest of the statement, with its carefully crafted denialism, can not. Notice how when Trump writes, “I join the Armenian community in America and around the world in mourning the loss of innocent lives and the suffering endured by so many” the suffering and loss of innocent lives are abstracted from any cause, that is, any perpetrator. Who caused the suffering, who committed the murder? We know, but we will not say.

The only mention of the perpetrators of the genocide – The Turks – comes at the end of the statement in which the Trump administration welcomes “the efforts of Turks and Armenians to acknowledge and reckon with painful history” which would be a welcome effort if an effort were indeed being made on the part of Turkey which still officially prosecutes those who would acknowledge the genocide within its borders and still actively works to stifle discussion in the international community (ask yourself why, before the release of “The Promise” on April 21st, you have not seen a big budget film about the Armenian Genocide).

According to a statement issued by the Armenian Assembly of America, “On April 10th, 84 Members of Congress signed a bipartisan letter to President Trump urging him to affirm the Armenian Genocide. Armenian Caucus Co-Chair Representative Frank Pallone, Jr. (D-NJ) spearheaded the letter asking the White House to honor the United States’ historic leadership in defending human rights and to properly characterize the events of 1915 as a genocide in this year’s presidential statement on April 24th.” Efforts like this occur every year, to no avail. The degradation of denial is by no means limited to the Trump Administration (at a Q&A following a screening of “The Promise” in New York City, director Terry George pointed out that Trump, as opposed to previous presidents, never promised to acknowledge the genocide in the first place – thus sparing him the hypocrisy, at least), but just as the genocide goes unacknowledged every year, every year we must hold our leaders to account and demand, again and again, the proper memorialization of the first genocide of the 20th century.