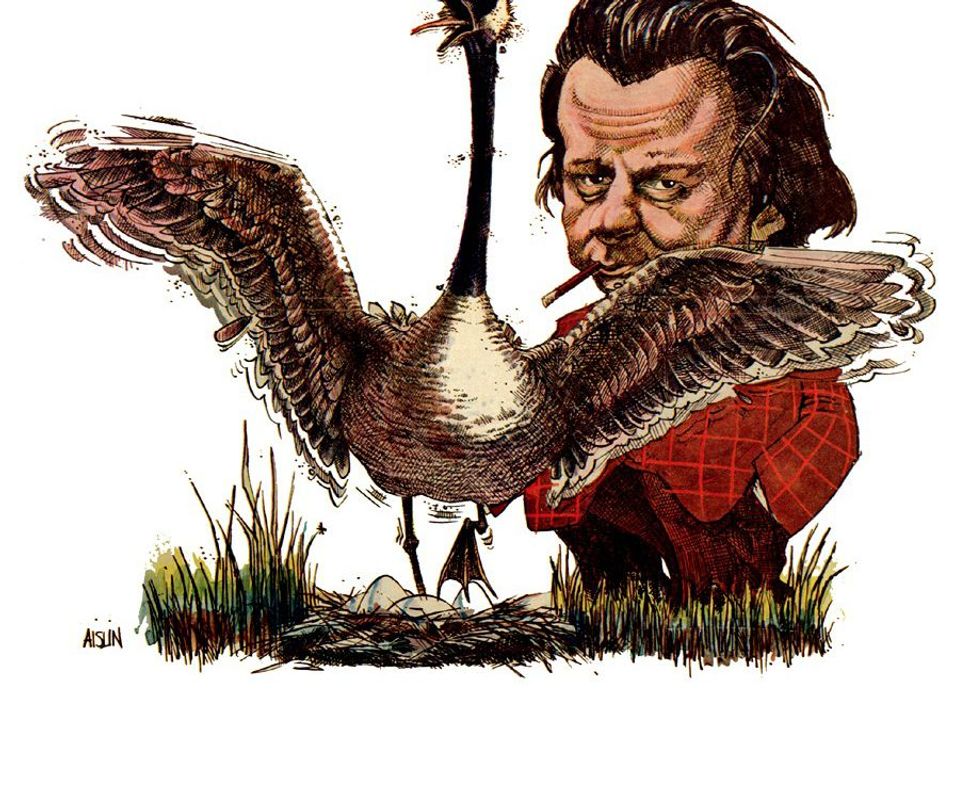 Canada’s foremost editorial cartoonist is finally opening up about his long-term relationship with Mordecai Richler, the larger-than-life Montreal-born writer.

“I was his official cartoonagrapher,” laughs Terry Mosher, whose acid-dipped cartoons have lampooned blowhards of all stripes in the Montreal Gazette for more than a half-century. “I drew him more than 40 times, including a Time magazine cover, The Atlantic, and Harper’s,” the cartoonist says.

Mosher’s work, drawn under the alias Aislin, is the subject of a new exhibition at Montreal’s McCord Museum, which owns 6,000 of his original drawings.

Mosher met Richler around 1970 at the Montreal Press Club, a gathering place for English-language media types – “it was action central back then,” Mosher recalls. “I had done a couple of drawings of him, so we got together for a drink. I remember it was a pleasant chat. I rarely compliment anyone, but I said ‘I like your writing’.”

Mosher also shared Richler’s penchant for provocation. His first cartoon of Richler – with the writer goosing a shocked-looking Canada goose – set off sparks when it ran on the cover of Canada’s now-defunct Weekend magazine in 1969.

Over the years, a professional relationship became a close friendship. “Mordecai used to lend me money,” Mosher says. “That’s friendship. And he was patient about me paying him back.”

Mosher also says Richler was quite different in private from his prickly public persona. “He was actually quite shy,” Mosher recalls. “For that reason, he developed this gruffness as a bit of coverup. And he always had a few drinks to get a little friendlier, even in interviews.”

Richler was also “very gentle,” Mosher says, especially when it came to Florence, the writer’s wife. “I remember being at a talk he gave at the Canadian Club, an august organization. Mordecai was with Florence, and she broke her heel on the sidewalk. He was just so concerned about how she could get it fixed. He certainly demonstrated his feelings.”

Despite some less-than-flattering caricatures, Richler never complained, Mosher says. “Maybe he got a little grumpy a couple of times. But he also gave me a priceless piece of career advice early in our friendship. He said, ‘Mosher a satirist must have 360° vision. Spare no one, not even me.’ He was wise enough to recognize that. A lot of people don’t.”

Though Jewish Montreal permeated the pages of Richler’s novels, the two never discussed religion. “He didn’t have to talk about Jewish identity,” Mosher says. “He wrote it. He just wanted to be remembered for getting it right. And he did. What we’ll remember him for is the writings about growing up in Montreal. The political stuff was the frustrated journalist in him. He always wanted to be a sportswriter.”

After railing against the absurdities of Quebec nationalism throughout his career, what would Richler think of the province’s more placid political landscape in 2017?

“There was an anger in Quebec’s Francophone community when he came on the scene. Captains of industry were English. Now that Francophones run everything in Quebec, there’s no reason for that fury. And I think he’d be delighted that it’s evolved,” Mosher says. “On other hand, he’d be a little bit disappointed in the lack of genuine characters.”

Mosher pauses. “Well, you do have a character in the White House. But I don’t think Mordecai would want to have a drink with him.”