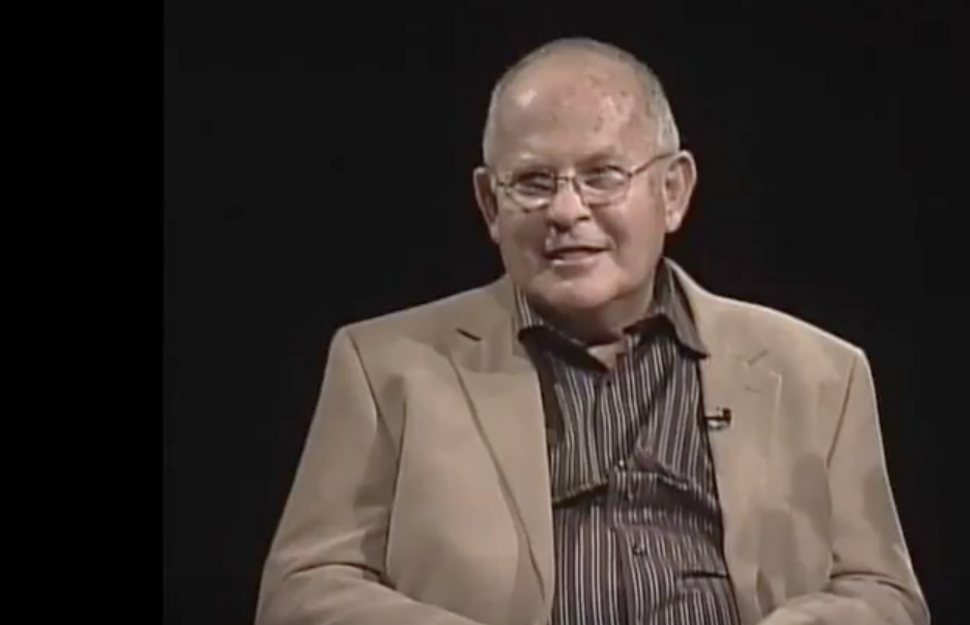 William Hoffman, author of “As Is” Image by youtube

The American playwright and editor William Moses Hoffman, who died on April 29 at age 78, expressed his Judaism through dramatizations of the tragic AIDS pandemic. As Jonathan Friedman’s “Rainbow Jews: Jewish and Gay Identity in the Performing Arts” notes, “Among the first dramatists to write plays about AIDS were gay Jews.” At a time when official silence on the disease from Ronald Reagan’s White House cost the lives of untold sufferers, Jewish authors such as Hoffman, Larry Kramer and others wrote pioneering statements with different artistic ambitions.

Hoffman’s bold “As Is,” (1985) told of the emotional experience of Saul, a professional photographer, whose ex-lover, Rich, has been diagnosed with the disease, at the time a death sentence. As Hoffman wrote in a preface to “As Is,” reacting to the treatment meted out to early AIDS patients by erstwhile friends, family, and society at large:

“Stories of the Holocaust came to my mind. Most of my family in Europe had perished during the war. As far as I know they never made it to the concentration camps, but were murdered on the street by their Polish and Latvian neighbors. I knew intellectually that the epidemic was not the Holocaust, but I had no other experience of mass death and public indifference and brutality to compare it with.”

Despite these chilling emotions behind his play, Hoffman did not express himself in uncontrolled hysteria like the proudly strident Kramer, the later rococo elaborations of Tony Kushner in “Angels in America,” or in the nervous one-liners of Paul Rudnick in “Jeffrey,” other Jewish expressions of compassion and empathy when these emotions were rare for AIDS patients. Possibly Hoffman’s longtime day job as an editor at Hill & Wang, a division of Farrar, Straus and Giroux, impelled him to pare down his prose to limpid vignettes, focusing on small details such as neon signs and painted fingernails to express larger dramatic points about life.

Hoffman’s exploring past tragedies while considering new ones continued in “Riga,” a play written a dozen years after “As Is,” as he told “The Advocate” in February 1999. “Riga” echoed the theme of a reunion of ex-lovers, this time one Jewish and the other African-American, leading the play to be advertised as “just your normal, gay interracial Holocaust play.” As Hoffman told “The Advocate”:

“Riga was intensely personal to me. It reflects the murder of my family during the Holocaust. Between 50 and 150 people in my family were killed… I thought the best way to memorialize my family was to try to say something that makes people take action in the real world against radical evil.”

In “Riga,” Wolf, a Jewish performance artist, explains to his ex-lover, called simply Z, an African-American conductor who teaches at Juilliard, why he had to visit the capital of Latvia, his mother’s hometown, to cope with his family’s Holocaust experiences. Tension deriving from anguish over the historical past had affected their relationship, with Z wondering if Wolf’s attachment to past events was “a Jewish thing.” Radical evil indubitably exists in the play, in the form of a Latvian concentration camp commandant who supervised the murder of Wolf’s family. Hoffman responded to this iniquity by including a parody of “The Protocols of the Elders of Zion” in his play.

Even when Hoffman was preparing his most widely publicized work, a libretto for the opera “Ghosts of Versailles” (1991) to music by John Corigliano, the Holocaust obtruded in unexpected ways. An opera buffa set in the 18th century, “Ghosts of Versailles” nevertheless inspired Hoffman to create an aria based on a speech by Nazi Germany’s Reich Minister of Propaganda Joseph Goebbels. In 1999, Hoffman told “Jewish Journal” that the theme of murdered French aristocrats haunting Versailles had stirred up visits from ghosts of his murdered relatives:

“I started to wonder what I would be doing if I were at that moment in Auschwitz. I became aware that I might have died in a death factory or in Latvia, along with scores of other members of my family.”

Part of the lasting impact on Hoffman was the permanent trauma experienced by his parents, Johanna Papiermeister, a jeweller, and Morton Hoffman, a caterer. They were unable to cope with the news about what had happened to their families during the War, and in 1942, Hoffman, then three years old, was taken to a foster home for 18 months while his parents tried to recover from the shock. Hoffman remembered that after learning about the fate of her loved ones, his mother “spoke incoherently, and she did not get out of bed. She was never the same…. I had to raise myself.” Being transplanted away from his family at this age was a trauma of a different order, Hoffman recalled to “Jewish Journal”:

“It was jarring. I didn’t know how to speak English, because my parents had raised me in Yiddish, Russian and German. Whenever my mother visited me, I used to cry and cry.”

Even so, the motivations for “Riga,” still unpublished in book form, and other works by Hoffman were not solely historical: “I wasn’t interested in ‘Yizkor.’ I wanted to make people recognize how much hate there is in the world today.” Part of the grim research for trying to understand this hatred was reading Hitler’s “Mein Kampf” and speeches by Louis Farrakhan, leader of the religious group Nation of Islam. Hoffman even attended the trial of the killers of Alan Berg, (1934 –1984) an American Jewish talk radio host in Denver who was shot by members of the white nationalist group The Order.

This unpleasant documentation may have somehow been useful when Hoffman wrote the libretto for “Morning Star,” an opera with music by Ricky Ian Gordon that premiered in 2015. About Latvian Jewish immigrants living on New York’s Lower East Side in the early part of the 20th century, the protagonists, Becky Felderman, a widowed mother, and her three daughters are shaken by the 1911 Triangle Shirtwaist Factory fire. Initially Hoffman had hoped to collaborate with Gordon on an opera drawn from Sholem Asch’s 1907 drama “God of Vengeance,” but Hoffman eventually saw the relevance of “Morning Star” to his own artistic concerns.

Whether confronting ghosts of Versailles, Riga, or Denver, William Hoffman was a dauntless writer whose works remain to be fully discovered.