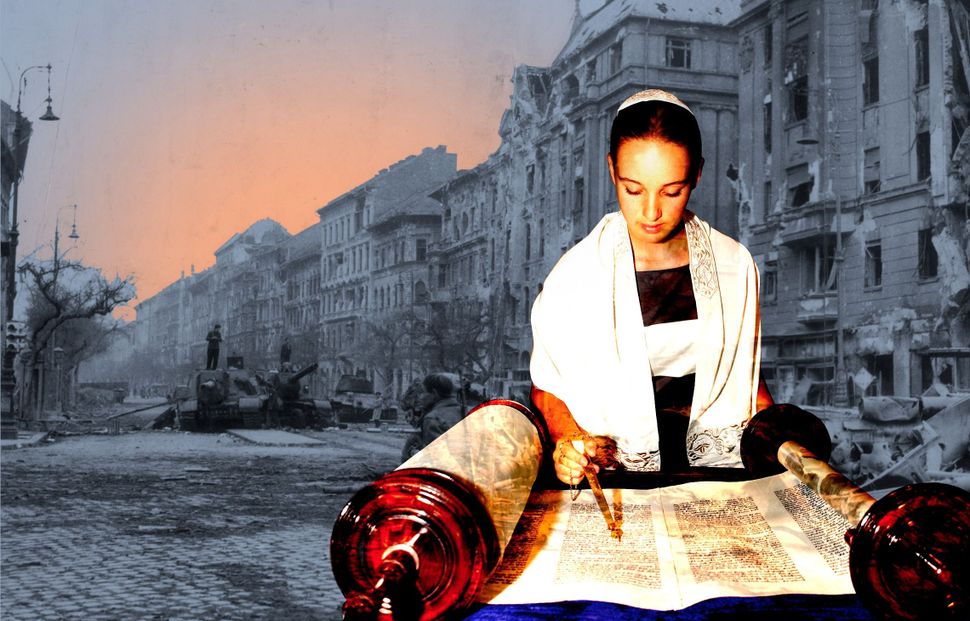 Our daughter stood on the bimah facing the congregation, cradling a Torah nearly half her size. She chanted the Shema, loud and strong, filling the airy synagogue. Her song stirred reflections on assimilation and annihilation, the twin threats to Judaism of the long 20th century, and on the narrow and winding path my family traveled through these threats to this moment. The odds were decidedly against this day.

Our synagogue has a European aesthetic — in particular, Central European — and it occurred to me that my Budapest ancestors did not set foot in synagogues after a certain point. Emancipated in the mid-19th century, Hungarian Jews flourished. Only 5% of the population on the eve of World War I, Jews were half of all those involved in trade and banking, half the doctors, and nearly half the lawyers and newspaper editors. After so many centuries of oppression, Jews were grateful for the opportunities Hungary had given them. Many took Hungarian surnames to show their nationalist pride.

My great-grandfather was a Budapest manufacturer and a proud Hungarian who changed his last name, Gansel, to the common Magyar name Szabo. Numerous Hungarian Jews went further and converted to Catholicism, the major religion in the country. I think of my grandfather’s three sisters, each a distinct and striking character. All three converted to Catholicism, and under their influence my father was raised Catholic.

When the Nazis occupied their ally Hungary on March 19, 1944, my father was not much younger than my daughter is now. March 1944 found him in a Jesuit boarding school in Kalocsa, in southern Hungary, donning a papal uniform daily. He was sent there the previous fall, after his father died of natural causes. And yet, when Adolf Eichmann and his Hungarian collaborators launched their concentration and deportation plans, my father was as much a Jew as any other. My grandmother sent her brother to Kalocsa to fetch him, and I imagine my father on the crowded train, confused as his uncle pins a yellow star to his overcoat.

While Eichmann and the Hungarian administrative and police machinery emptied the Hungarian countryside of nearly half a million Jews and sent them to Auschwitz, my grandmother acquired false papers from Christian friends and made plans to hide. By summer 1944, there remained in Hungary only the Jews of Budapest.

The Allies established a beachhead in Normandy, the Soviets approached from the east, Raoul Wallenberg arrived and an unstable stand-off ensued in Budapest. Yet in mid-fall, after a futile attempt by the Hungarians to declare neutrality, all bets were off. Jews were concentrated, and many were hunted down on the streets. My grandmother hid my father in an orphanage, my aunt in a convent. When these arrangements were threatened, they hid in the basements of apartment houses as Soviet and German soldiers fought a bitter block-by-block battle for the city. My father later recalled how the entire apartment house shook during bombardments, and how his mother dodged explosions to check on him and his sister in their hiding places.

My daughter’s bat mitzvah fell at the start of the month, and she was chanting a haftara nearly 10 minutes long. Her beautiful voice brought to mind the chants and songs of my father’s teenage years. I remain astonished that, after surviving the war in Budapest, where he was marked as a Jew, he returned to the church, serving as an altar boy in St. Stephen’s Basilica, the largest in Budapest.

Amid the rebuilding that followed Soviet “liberation,” my grandmother opened a fabric store in downtown Pest. But threats from Communist officials led her to decide to escape with her children to America. She married a man she knew from childhood who had emigrated in 1938; they arranged to be smuggled to Vienna, and in the summer of 1950 they landed uneasily in the Bronx before settling in Queens. One summer, while at City College, my father met my mother, a Brooklyn College girl. They married a few years later, and her more Jewish-grounded family helped bring him back to the religion.

I was raised in a Maryland suburb. I went to Hebrew school, but, as for many of my generation, it was an uneven experience. Images from black-and-white films of death camp liberation resurfaced — piles of bodies and bones tidied by bulldozers. I remember cutting class with a friend and shooting baskets right outside the synagogue. How strange that the people who felt strongly enough to show us those films somehow left us to our truancy in plain sight.

The moment my daughter stepped up on the little stool she needed to reach the Torah and microphone, she cast a spell over the room. Her portion was Va-era, from Exodus, covering the first seven plagues. In her speech about her Torah portion, she castigated God for his lack of compassion. I was thrilled. Something in the sensation went beyond pride in her audacity. It is a kind of existential joy that she is here in this moment.

The odds come to mind again. According to the 2013 Pew Research Center study, nearly 60% of all Jews who married since 2000 married non-Jews, as I did, and 80% of the children of intermarriages are not raised Jewish. I think of my family. Somehow, the Judaism within us survived assimilation in Hungary, Holocaust machinery, suburban assimilation in America. We are at or near the edges of Judaism as far as religious observance is concerned, and yet we are at the core of its struggle for survival.

I was brought back from this reverie by the rabbi, who prodded me that it was time for the Shehecheyanu. I regrouped and said the prayer to the congregants with hope and gratitude. Today the words have special resonance. “For enabling us to reach this season.” Indeed.

Peter Szabo is the author of “Finding Maria: A Young Man’s Search For His Grandmother, and Himself.”