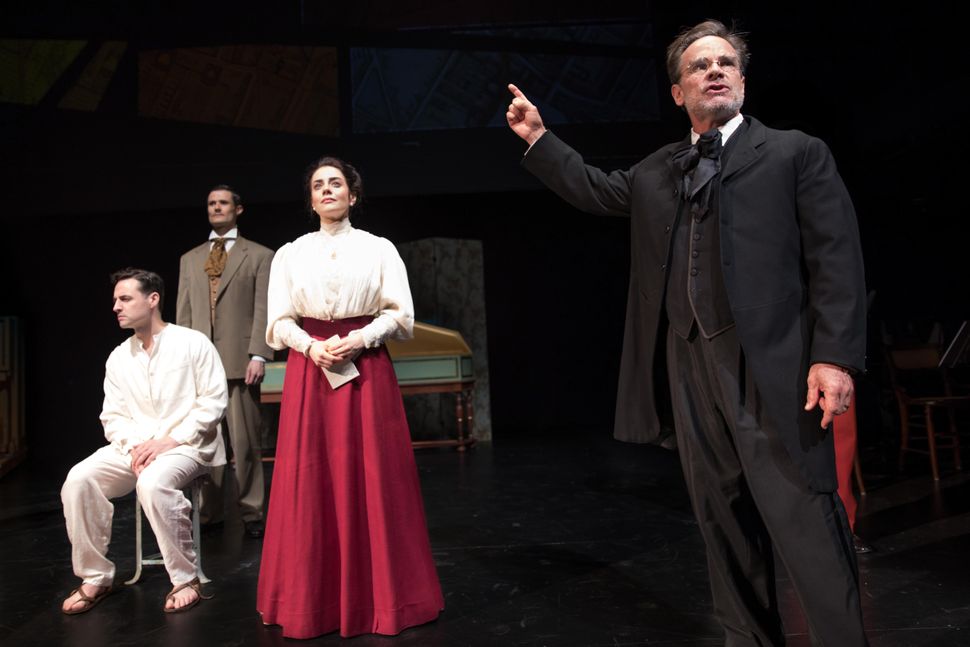 The infamous story of the 1894 conspiracy against French Jewish Captain Alfred Dreyfus for treason is being dramatized at Brooklyn’s BAM Fisher in a multi-media production, “The Dreyfus Affair,” based on texts and music from that period. The performance by The Ensemble for the Romantic Century (ERC) includes excerpts from the politically charged opera “La Juive” by Jacques Fromental Halévy, a highly regarded Jewish composer in France during the 19th century.

The script is based on actual articles, diaries, letters, memoirs, speeches and accounts by the historical figures involved in the Dreyfus Affair, most notably text from Émile Zola’s newspaper article “J’Accuse,” which illuminated the falsehoods spread by other major newspapers of the time.

The show, which features ten actors and a music ensemble, is a collaboration between director Donald T. Sanders and writer Eve Wolf. The cast includes Max von Essen (Tony Nominee for “An American in Paris”) in the title role of Alfred Dreyfus, Mark Evans as his devoted brother Mathieu Dreyfus, and Peter Scolari as Émile Zola who is perhaps the most significant player in the story. Zola ultimately flees to England after being brought to trial and convicted for libel. According to the playbill, which contains a wealth of historical information, “the Dreyfus Affair was primarily created by the Parisian press, which was by then the largest, most diverse, and most inflammatory in the world.” French society became rapidly anti-Semitic, erupting in riots and casting suspicions on Jewish loyalty to the country.

“The Dreyfus Affair is a symbol of injustice,” says Eve Wolf. “It spectacularly exposed the virulent right-wing forces in French society — forces that can be traced down to our own day, and not only in France. Yet the heart of this story is not the injustice itself, but the moving fact that people of character and fortitude — Émile Zola, Georges Piquart, and the Dreyfus family — risked their lives, careers, and fortunes to get to the truth. They never gave up or gave in, and this is perpetually relevant.”

What’s particularly astounding is that Dreyfus was absolutely committed to France, arguably even more so than to his Jewish faith. Even after five years in an isolated prison on Devil’s Island in the French Guyana (a place notorious for holding political prisoners, anarchists, murderers and thieves dispatched there by the French government), when Dreyfus was officially exonerated of charges that he sold military secrets, he almost immediately reenlisted in the French army, returning to fight during World War I.

In one of the most poignant scenes, Dreyfus’ wife, Lucie, visits him when he is initially imprisoned. “How could France whom I love with all my soul, all my heart accuse me of this appalling crime?” Dreyfus says. “I am not an observant Jew nor do I share your strong faith. But mine is a strict even religious faith in France.”

According to the Playbill, “the factions in the Dreyfus affair remained active for decades afterwards. During the Nazi occupation of France, the collaborationist right-wing Vichy Regime, which was composed of old anti-Dreyfusards and their descendants, deported 76,000 Jews to Nazi concentration camps, including Dreyfus’s grand-daughter Madeleine Dreyfus Lévy, who perished at Auschwitz.”

Even today, Dreyfus statues and monuments are vandalized by far-right activists. In 1985, President François Mitterrand commissioned a statue of Dreyfus by the sculptor Louis Mitelberg to be installed at the École Militaire, but the minister of defense refused to display it. Incredibly, the army didn’t formally acknowledge Dreyfus’s innocence until 1995. In July 2006, in a speech delivered during the commemoration of the 100th anniversary of Dreyfus’s exoneration, President Jacques Chirac stated that “the combat against the dark forces of intolerance and hate is never definitively won.”

“The Dreyfus Affair” runs through May 7 at BAM Fisher.