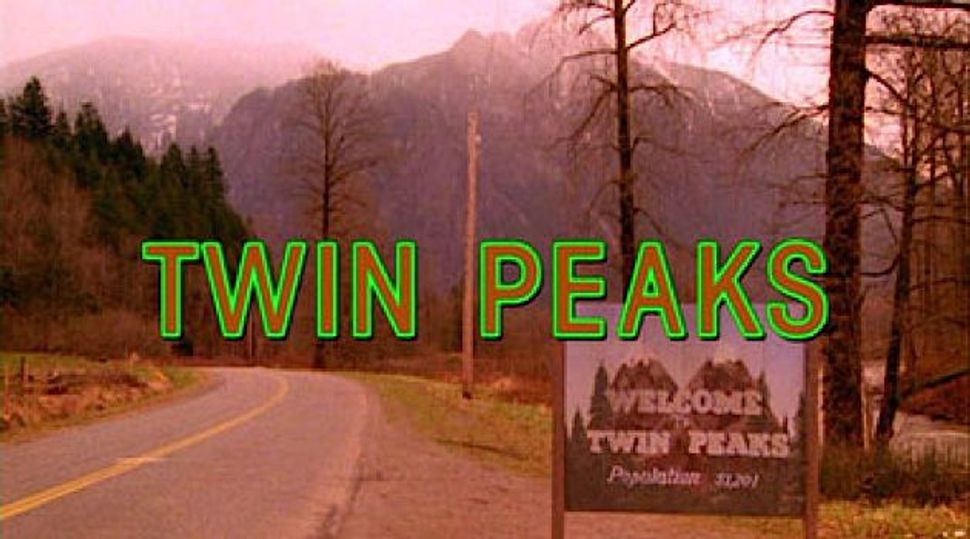 Before the Sopranos: David Lynch’s ‘Twin Peaks’ was a paradigm-shifting event in TV history. Image by Wikimedia Commons

Once upon a time, before “Transparent,” before “Mad Men,” before “The Wire,” even before “The Sopranos,” there was “Twin Peaks.” Aired in prime time on ABC-TV, “Twin Peaks,” which debuted in April 1990, was the first TV series that aspired to the creative level of independent cinema, driven by the quirky vision of filmmaker David Lynch, who was just coming off the success of his creepy, violent thriller “Blue Velvet.”

“Twin Peaks” was a paradigm-shifting event in TV history. Its surrealistic style, its bizarre fusion of soap opera antics with extreme violence and sexuality, its “magical realism,” and its resistance to the conventions of regular broadcast television broke open the medium every which way. A huge critical and commercial hit in its first season, the show was ultimately a victim of its own success, not lasting beyond its second season, when ratings plummeted after the producers succumbed to network pressures to solve the central murder mystery of who killed Laura Palmer prematurely, while the real-life horrors of the Gulf War preoccupied a nation of TV viewers.

Partisans of the show, including me, were furious. I truly believed (and still do) that the initial success of “Twin Peaks” so unnerved those in the executive suites of the TV networks — pointing as it did to new possibilities of what TV programming could be — that they leapt at the opportunity to stifle it.

Of course, the monster was already out of the bag, and TV never was the same. “Twin Peaks” begat “The X-Files,” which begat “Lost,” and so on, and episodic shows — especially those produced independently and shown on cable networks like HBO and Showtime — eventually proved equal to or better than most of the dreck produced in Hollywood. Certainly today, edginess and complexity that doesn’t insult viewers’ intelligence is the norm, at least in the best TV, from “Orange Is the New Black” to “Homeland.”

And now, with the news that 25 years later, “Twin Peaks” will be resurrected by the original creative team in 2016 with a new season on Showtime, David Lynch and co-creator Mark Frost seem to be getting the last laugh.

One of the anomalies of “Twin Peaks” was that it was set in a Washington logging town on the Canadian border. Border crossings, of course, were a motif of the show, as they are throughout most of David Lynch’s work. Plus, the Pacific Northwest had up until then been neglected by or ignored in popular culture; it’s fascinating that just as Lynch and Frost were gearing up to popularize this world, a music scene was fermenting up and down the Washington coastline that would dominate the pop world for the next half-decade. (Nirvana’s major-label debut, “Nevermind,” was released just a few months after the final episode of “Twin Peaks” aired.)

The choice of this region, and the characterization of the town of Twin Peaks in particular, gave Lynch and Frost the freedom to create a world with a gloss of innocence — a world of homecoming queens and high school football stars, cherry pie and damn fine coffee, sawmills and fly fishing — below which seethed an underworld of demonic darkness. In other words, a vision not so unlike David Lynch’s view of America itself. And while there were few overt Jewish referents in this world, a close reexamination uncovers several themes, characters and creative collaborators who helped feed this world and gave it a Hebraic tinge. Here are just eight of the secret Jewish aspects of “Twin Peaks.”

1. The show’s main character, FBI agent Dale Cooper — played by Kyle MacLachlan — is a devotee of Buddhism. He uses what he calls the “Tibetan method” for discerning who is a bad guy, and displays a “be here now” approach to life and work. As we all know, in America, scratch a Buddhist, find a Jew.

2. Cooper’s friend and FBI co-agent, Albert Rosenfield, played by Miguel Ferrer, is the character with the most overtly Jewish characteristics, starting with his name (in spite of its spelling, he’s called “Rosenfeld” by everyone). When Rosenfield first arrives in Twin Peaks, he flaunts a big-city arrogance, seemingly viewing everyone as incompetent and or stupid (which, in fact, they are). But after Rosenfield and the local sheriff, Harry S. Truman, face off a number of times both verbally and physically, Rosenfield finally lets out his secret — he, like Cooper, is also a pacifist Buddhist who loves all mankind. The Buddhist/Tibetan motif presumably comes from David Lynch, a vocal supporter of Tibetan independence and a devotee of Transcendental Meditation, who founded the global David Lynch Foundation for Consciousness-Based Education and World Peace, to fund the teaching of TM in schools and prisons, and to military veterans and the homeless.

3. “Wrapped in plastic.” In Episode 1, high school homecoming queen Laura Palmer is found dead, wrapped in see-through plastic like some suburban Jewish sofa, washed up on the shore of the river that runs through the town.

4. SPOILER ALERT: As we come to learn, Laura Palmer was killed by BOB, an evil demon that possessed her father for many years, sexually abusing her and driving her toward a secret life of drugs and prostitution. BOB resembles a latter-day dybbuk, a malevolent force clinging to life by inhabiting the bodies of living persons who are otherwise good souls.

5. The actress and former model Peggy Lipton enjoyed a career revival thanks to her role as diner owner Norma Jennings. Until then, she was best known for her turn as Julie Barnes, the hippie undercover cop in “The Mod Squad,” as well as her real-life role as Mrs. Quincy Jones. Lipton’s grandparents were all Jews of Russian and Eastern European origin; she was born in New York and raised in Long Island’s Five Towns region.

6. David Duchovny, whose father, Amram “Ami” Duchovny, was a writer and publicist who worked for the American Jewish Committee, got his first big boost with his recurring role as a transvestite DEA agent. From there, he went on to star in the heavily “Twin Peaks”-influenced science fiction series “The X-Files,” as FBI Special Agent Fox Mulder, a conspiracy theorist who believed his sister had been abducted by aliens.

7. Laura Palmer, the blonde, WASPy homecoming queen whose death instigates the police investigation that propels the plot of “Twin Peaks,” was played by Sheryl Lee, who after dating David Duchovny went on to marry photographer Jesse Diamond, son of the Brooklyn-born Jewish Elvis himself, Neil Diamond.

8. Ben Horne, played by song-and-dance man Richard Beymer — who in fact played Peter in the film of “The Diary of Anne Frank” — is the richest man in Twin Peaks, a nefarious, greedy character whose various business interests and relationships make him an on-again, off-again suspect in the murder of Laura Palmer. Ben’s flamboyant brother and business partner, played by David Patrick Kelly, is named Jerry, an obvious allusion to the real-life Ben Cohen and Jerry Greenfield, the founders of Ben and Jerry’s ice cream.

As to how much of this will make it into the new version of “Twin Peaks,” and how much will be totally reinvented, we will just have to wait until 2016 to find out.

Seth Rogovoy is a frequent contributor to the Forward, where he recently mined the Jewish aspects of such unlikely subjects as the Beach Boys, U2, Tupac Shakur, and David Bowie — who had a cameo role in David Lynch’s “Twin Peaks: Fire Walk With Me.”