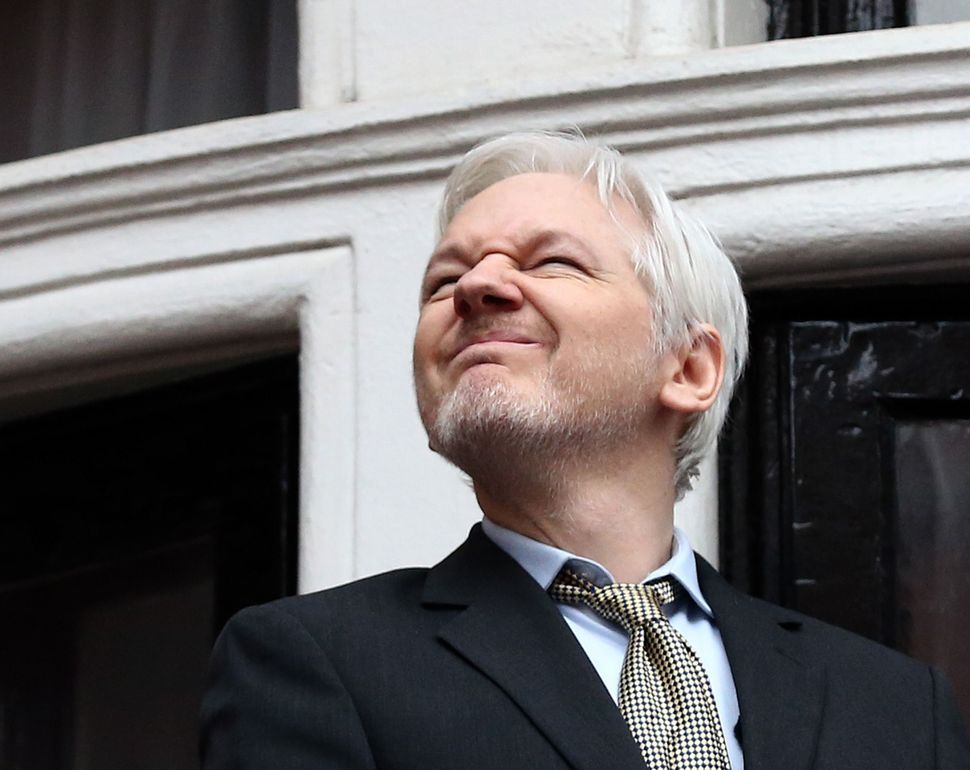 Look at how they look at him, Julian Assange’s cadre of cyber vigilantes. In a private home in Norfolk, in livery cabs with Daniel Ellsberg in the passenger seat, in windowless rooms in the Ecuadorean Embassy in London, members of Assange’s Wikileaks organization fawn over him and defer to him, give him the floor first and let him have the last word. In “Risk,” director Laura Poitras’s latest dispatch from the fight for suppressed information, she gives us unprecedented access not only to the white-haired international man of mystery, but to his loyal followers as well.

Poitras shot the film over the course of six years. She followed Assange from the release of 250,000 State Department cables, in 2010, to his retreat in 2012 into London’s Ecuadorean Embassy to avoid extradition to Sweden allegations of rape and sexual assault. The film was first screened at the Cannes Film Festival last summer, but was recut to include Assange’s involvement in the 2016 U.S. election. It also now alludes to the widespread allegations of sexual assault made against his close associate, Jacob Appelbaum, a hacker and major force behind the anonymous internet communication platform Tor. It is a kind of follow-up to Poitras’ 2014 film “Citizenfour,” about her partnership with Edward Snowden in releasing his trove of NSA documents. That illuminating film won an Oscar for Best Documentary.

Throughout the film, the title cards and Poitras’s voiceovers (often announced as notes from her “Production Diary”) are in present tense, which lends the film a sense of immediacy. This is to the film’s advantage, since while its subject is eminently newsworthy, Poitras lost her access before Wikileaks’ most recent starring role in U.S. politics — its alleged cooperation with Russia in releasing emails from Hillary Clinton’s campaign and the DNC. Unlike “Citizenfour,” “Risk” gets its gravity not from a thriller-like plot, but sheer proximity to the cult of Assange.

Poitras has a knack for being in the room where it happens — with a camera, no less. She has an unshakeable sense of presence, which she builds by training multiple cameras — some on tripods off in the corner, some gracefully handheld — on a single conversation. The effect is less “fly on the wall” than novelistic omniscient narrator. (Poitras also has the benefit of hindsight, considering that most of her principal photography for the film dates to Obama’s first term.)

Yet this approach gave way to one of my central frustrations with the film: Poitras is so intent on making a film about journalistic perspective that she does not deign to actually investigate any of the claims brought against Assange or his friend Jacob Appelbaum. As Poitras recently told Vox.com, “I don’t go and do interviews and talk about things from the past. I film what’s in front of me.”

As with New Yorker writer Janet Malcom’s meta-journalistic classic, “The Journalist and the Murderer,” the question at hand is not the guilt of the accused, but the relational aspects of the story. Poitras, as the director of this film, does not seem to be interested in whether Assange committed the crimes of which he is accused. Rather, she wants see how he manipulates those around him into sticking to the party line: that Assange is Robin Hood on the run from every government agency he can name, the victim not only of institutional stalking but also of a feminist conspiracy.

The irony here is that the statute of limitations on three of Assange’s sexual assault crimes (two counts of sexual molestation and one count of unlawful coercion) expired while he was holed up in the Ecuadorean embassy. Without a thorough investigation into those charges, the public may only get the chance to know the truth about Assange the cultish transparency advocate, and not Assange the alleged rapist. But while the first Assange is scrutinized closely and the second is only glimpsed, a third — Assange the anti-Semite — is nowhere to be seen.

Assange has made no secret of his distrust of Jews, particularly Jews in the media. In 2011 he spoke to the editor of the British magazine Private Eye about a conspiracy, led by Jewish journalists at the Guardian, against him. In 2015 he tweeted on how the “Jewish pro-censorship lobby” aided attacks on the French satirical paper Charlie Hebdo.

Off Twitter, Assange aided an avid Holocaust denier, Israel Shamir, by giving him access to 90,000 as-yet-unpublished State Department cables relating to the Middle East, Russia and Eastern Europe. Shamir turned around and reportedly shared those cables with Alexander Lukashenko, the president of Belarus since 1994 — a man who the Guardian has said presides over “Europe’s last dictatorship.”

All of this goes unmentioned in “Risk.” Poitras’ concern lies elsewhere; whether this represents a partial abdication of her responsibilities as a documentarian is a matter of your priorities. What is more interesting, the character or the crimes? What is more important, allegations of rape or clear-cut global surveillance? Poitras makes no attempt to answer these questions, as they are but a matter of perspective.

But Assange has his own convenient answer.

When Poitras asks him about how much his work has to do with power, (the implication being that Assange enjoys his position of power) he responds with a trite metaphor. If you are a gardener, your area of concern is your garden, he says. But if you expand your area of concern to the whole world, the garden becomes unimportant.

“Acting locally is completely inconsequential,” Assange says. “If your perception has been globalized, the area that I care about is the whole world.”