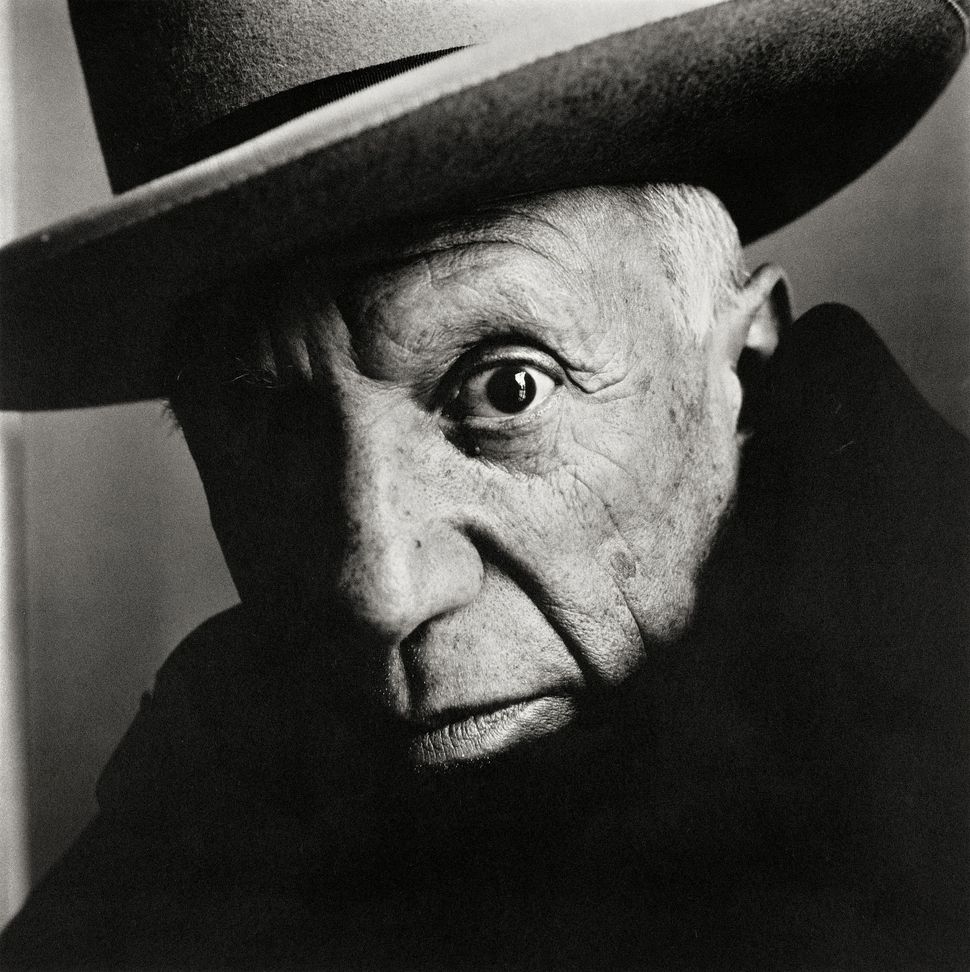 In portraits, Irving Penn liked to photograph his subjects at the mercy of their creations. He shot the fashion designer, Charles James sprawled with near-sensuous resignation at the foot of a mannequin wearing a ball gown; Salvador Dalí with his angular face jutting out as if pulled forward, relentlessly, by his expertly waxed mustache; Gianni Versace reaching over his head to remove his hat, instead merely grasping its brim. Take away the fashion, and you take away the man.

Sometimes it was simpler. A late portrait of Truman Capote features the writer with his eyes closed. He rubs his temple with his right hand, which also holds his glasses, and his chin with his left thumb, his hand appearing to reach for his neck. Two things made Capote tick: what he could perceive, and what he could write in response. His glasses and hands dominate his portrait, the tools of his eyes and mind. Briefly neglecting them, he looks almost adrift. 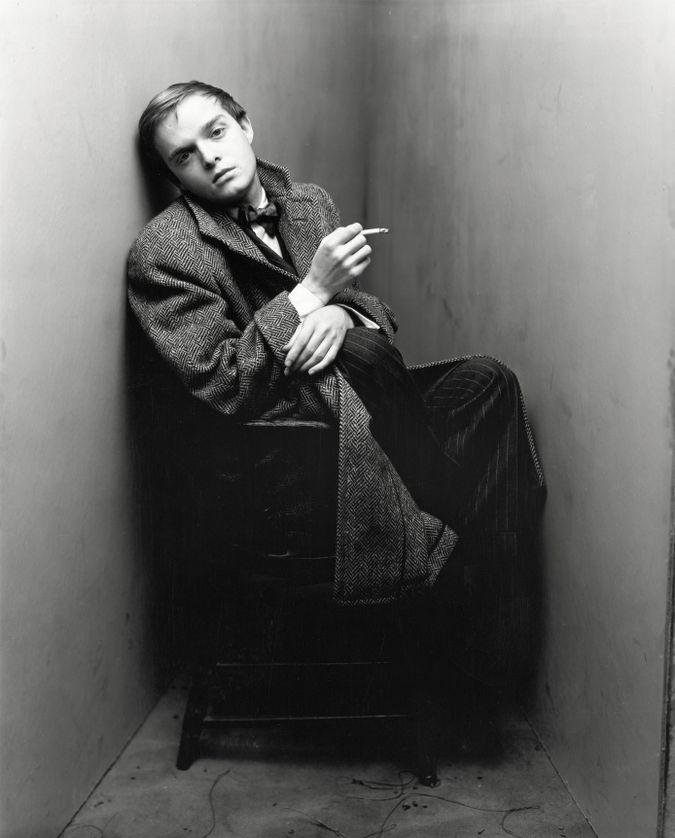 It wasn’t that Penn wished to define his subjects; he wanted, with direct intimacy, to expose audiences to the entirety of their characters. He understood the obsession artists have with their art, so he took pains to capture their obsession.

He took that same craft to the streets, photographing the working classes of London and Paris. He even took it to, unexpectedly, photographing cigarettes. His images of cast-off Lucky Strikes and Pall Malls expose their grotesque burnt-out innards with an almost loving concentration that, in a neat twist, clarifies their horror.

A new centennial retrospective at New York City’s Metropolitan Museum of Art makes clear that Penn, who died in 2009 at the age of 92, knew how to engage composition to pursue depth.

Looking at his work in passing, someone might mistake its consistent qualities — pristine structure, a taste for the sculptural, winking directness — as a rote choice of style. It wasn’t. His craft let him bring out the soul of a person — or cigarette, or salad. His work is consistent because of how varied it is, not despite it.

Penn was born to Russian Jewish immigrant parents in 1917. He initially hoped to be a painter, but under the mentorship of Alexey Brodovitch he instead entered the world of magazine photography. Brodovitch, a teacher at Penn’s art school, twice asked the young artist to be his summer assistant at Harper’s Bazaar, where he was the art director.

After graduating, working freelance design and art direction jobs, and making a brief trip to Mexico in a disappointing outing as a painter, Penn found himself at a new competitor of Harper’s Bazaar: Vogue. There he formed a powerful partnership with art director Alexander Liberman, briefly interrupted by Penn’s service as an ambulance driver and photographer during World War II. Liberman assigned Penn portraits that would help make his name, and then sent him to Paris to photograph the semiannual parade of new fashions.

Removing himself from the bustle of the runway, Penn instead photographed handpicked American models in a bare studio with an old theatrical curtain for a backdrop. (He would marry one of those models, Lisa Fonssagrives; his fashion photographs of her, in the Met exhibit, are vibrant in their emotional closeness.)

Penn worked for Vogue for over 60 years. He had an extraordinarily creative eye for fashion photography, and took a clear pleasure in it; in one visually witty 1947 photograph, a woman just outside the frame balances her black-clad elbow on a table, her arm forming a V, her white-gloved hand holding a black shoe, itself an inverted imitation of her arm. 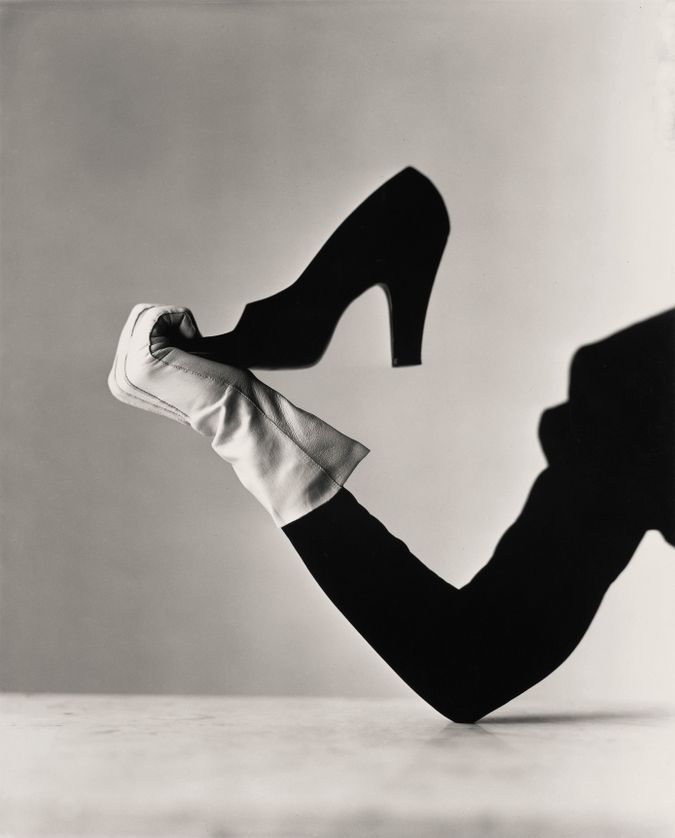 Penn’s creativity was obviously insatiable, forever seeking new modes of expression. Hence the exhibit’s room devoted to a portion of Penn’s three-year project photographing those discarded cigarettes; to his returning interest in architectural still lifes, a preoccupation that took increasingly inventive forms throughout his career, and to his trips to photograph indigenous cultures in Africa and New Guinea.

Most striking of all is a series of female nudes from the late 1940s and ’50s. His images were a quiet celebration of the ingenuity of the female form, starting with “Nude No. 1,” which is an unexpectedly tender admiration of a heavier woman’s unstylish curves. (The exhibit’s catalogue quotes Penn describing this series as a retreat from “skinny girls with self-starved looks.”)

Later images in the series, developed in a rare printing process that involved overexposing the print and then bleaching it until its details re-emerged, show women’s torsos and legs — all his nudes carefully omit their subjects’ heads — posed with an utterly unique sense for beauty. Some of them resemble sand blown into dunes. Some, photographed straight-on, play with light to highlight stretch marks. To what might be the surprise of viewers, primed to think of the imperfection of a woman’s skin as ugliness, the marks are beautiful, light, alien caresses that make their bearers seem almost statuesque.

Like Penn’s portraits, his nudes show people arranged to suggest some unconquerable essence. Is he making the untactful point that the essence of a woman is her body? Not quite. By defying all conventions of how the female body is supposed to be portrayed, with female bodies that likewise fit no norms, he exposes in his subjects an unexpected freedom. Their bodies showcase something essential about them, and something that will remain blessedly, unsensationally mysterious.

The exhibit teases the question of what would have happened if someone had stripped Penn of his camera, as he stripped his subjects of their voluntary and involuntary guises. There’s a sort of answer in the awestruck quality of his images, down to the last. As long as he could see and imagine, he would probably have been okay. As long as he could look, he could live.