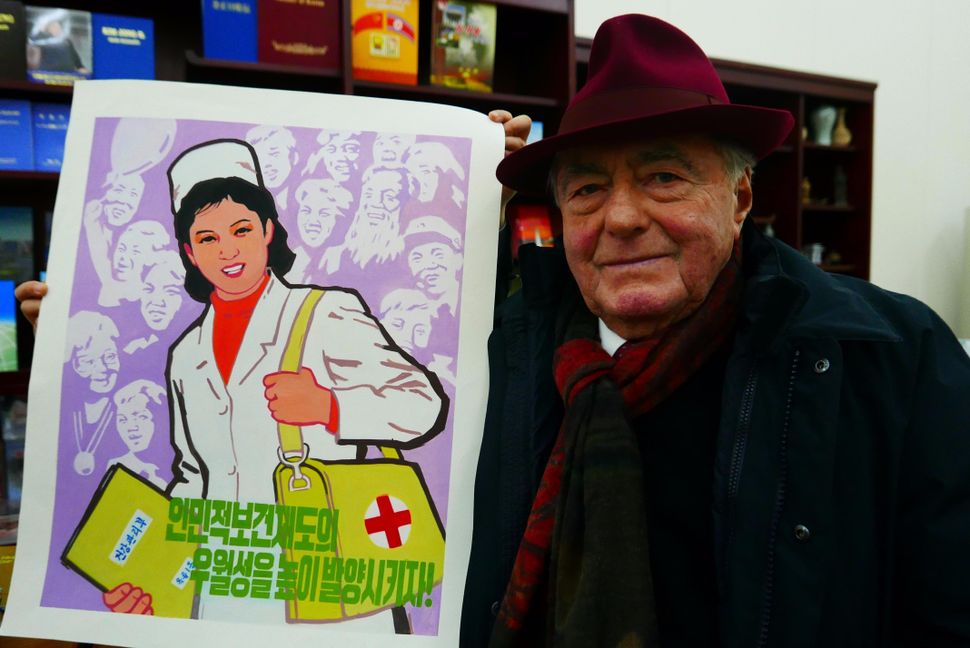 Over the course of his nearly fifty-year career as a filmmaker, Claude Lanzmann has traveled from the Middle East to the Nazi death camps. The 91-year-old documentary legend’s latest, “Napalm,” unexpectedly takes us to North Korea, where Lanzmann travelled in 1958 as part of the first Western delegation to be officially invited to the country in the aftermath of the Korean War. (In the film, Lanzmann muses that his communist sympathies, developed while he was a young man during World War II, where he fought as a partisan, probably helped clinch the invitation.)

This small, strange and unexpected film is equal parts travelogue, part forbidden love story, and meditation on mortality. It premiered earlier this week at a special screening during the 70th Cannes Film Festival.

At the center of the film is the remarkable story of an unconsummated love affair between the 33-year-old Lanzmann and a ravishing — to hear Lanzmann describe her — North Korean nurse who administered shots of B12 to the young diplomat nearly 60 years ago. Lanzmann, who first related the tale in his 2009 memoir “The Patagonian Hare” (translated into English by Frank Wynne in 2012), here recounts the story of his wordless near-seduction with the affable, rambling manner of a slightly out-of-it grandfather. Here and there, he throws in a lecherous detail that might remind you of your dirty uncle. But the tale itself is captivating: the sort of mysterious, doomed and highly symbolic romance that Marguerite Duras might have written and Alain Resnais might have filmed, say, under the title “Pyongyang, Mon Amor.”

A secret assignation on a bridge, a capsized boat and a nerve-wracking tribunal in a hotel room are all elements of the tale that Lanzmann reveals in his meandering and charming way. The most Duras-worthy detail of the whole incident is how the only word that Lanzmann and the nurse have in common is “Napalm,” the heartbreaking explanation she offers when Lanzmann feels the seared underside of one of her breasts.

I meet Lanzmann on the fifth floor offices of Orange, the French Internet provider that produced “Napalm.” The suite commands a majestic beach view from its terrace, but the director is indoors, looking ancient and tired. It’s midafternoon and he seems to have reached his limit. Before we begin, he asks for a glass of red wine, exactly the pick-me-up he needs, I think. Throughout the interview he leans on his grape vine walking stick, while answering questions in a halting, at times vague, mixture of English and French. A translator assists.

Despite his appearance, the nonagenarian is argumentative and opinionated. When I ask how it was to make his first autobiographical film, he counters by insisting that he’s always made movies about himself. “In I sense, I’m the main character in ‘Shoah.’ I’m the one who talks, who asks the questions,” he said about the nine-and-a-half-hour long documentary that is his undisputed masterpiece.

“But yes, there is a difference now,” he finally admits. “It ‘s necessary to do what I have done now, to have the courage to dare to show the public an old face. An old face, wrinkled, tired and so on. There are moments when I see myself on the screen and I hate myself. And I would like to destroy myself with a machine gun.”

The specter of death haunts “Napalm.” Towards the beginning of the film, Lanzmann looks up at the monumental, 70-foot-tall bronze statues of Kim Il-sung and Kim Jong-il that adorn Pyongyang’s Mansu Hill Grand Monument complex and muses about how the universal hunger for immortality is palpable even inside a thoroughly closed-society that, in Lanzmann’s analysis, succeeded in bringing time to a standstill 65 years ago.

Most of the footage in “Napalm” was shot in 2015, during Lanzmann’s third visit to the famously off-limits peninsula (he had previously been invited in 2004). Filming without a permit, Lanzmann and his cinematographer, Caroline Champetier, a long-time collaborator, film him at Mansu Hill, touring around the National War Museum (where we get a host of statistics — real or bogus, it’s hard to say — about the crimes of the “American aggressor”) and watching a women’s Taekwondo class, thoroughly gob struck.

Although the film is warm in its presentation of North Korea (and specifically, North Korean women), Lanzmann stresses that he did not set out to make a political film. “It doesn’t mean that I am a supporter of this regime,” he explains, adding that his communist allegiances died out long ago. “I am not at all. And I think I have shown this in the film. But it’s more complex and more complicated to say Axis of Evil,” he adds.

It’s clear that Lanzmann views this as a profoundly personal project. “After all, this film is about the relationship of mankind to death and the desire for eternity. And they” – meaning North Korea — “have this, like every civilization,” he explains. It shouldn’t come as a surprise that Lanzmann may have intimations of mortality. He is still making films at an age when many of his contemporaries have either retired or passed on. Beyond this, earlier this year his 23-year-old son Félix tragically died of cancer.

Lanzmann has long been one of France’s leading intellectuals. He still edits “Les Temps Modernes,” the literary journal founded by his close friend Jean-Paul Sartre in 1946 and he regularly contributes articles to Le Monde. Like many of his other films, “Napalm” examines the deep wounds that war leaves on societies and individuals. “In 1958 they were very sympathetic, generous and civilized in spite of the fact that they went through this terrible war in which four million civilians were kind,” he says, recalling his first visit to North Korea. “This horrible war is at the root of everything that we’re seeing now. You cannot talk about this country and experience it and forget about the Korean War. This war made them,” he adds.

Beyond Lanzmann’s insistence on understanding a country considered a pariah by much of the world, he also reveals his deep skepticism about war. “I think that the Second World War was a terrible war, but it was a just war. I am not sure that all these wars now are just wars,” he says, referring specifically to Libya in 2011, when France, under Nicolas Sarkozy launched an offensive to oust Muammar Gaddafi. At that time, Lanzmann publicly sparred with Bernard Henri-Lévy, arguably France’s most prominent Jewish public intellectual, who urged intervention. Despite his outrage, Lanzmann said he had no intention to make a film about Libya or the refugee crisis. If he did, however, he “would not spare these people” – intellectuals like BHL who clamored for intervention – “because I think that they are guilty for the dead and the refugees.”

Although he hardly shuns public life, Lanzmann says he has no interest in making an overtly political film. “I am not a member of any political party. It bores me,” he adds.

Instead, his next project marks a return of sorts to Lanzmann’s usual territory: a series of short documentaries about four Jewish women who survived Nazi camps, with the Chekhovian title “Four Sisters.” It will be distributed in early 2017 by the French broadcaster Arte. Looking at Lanzmann, hunched over his walking stick, it’s hard to believe that the filmmaker’s productivity hasn’t slowed down over the past decade. But so it is. “I don’t feel my age. If you ask me what is my age, I’d say I have no age,” he says. “This is not coquetry. It’s true.”