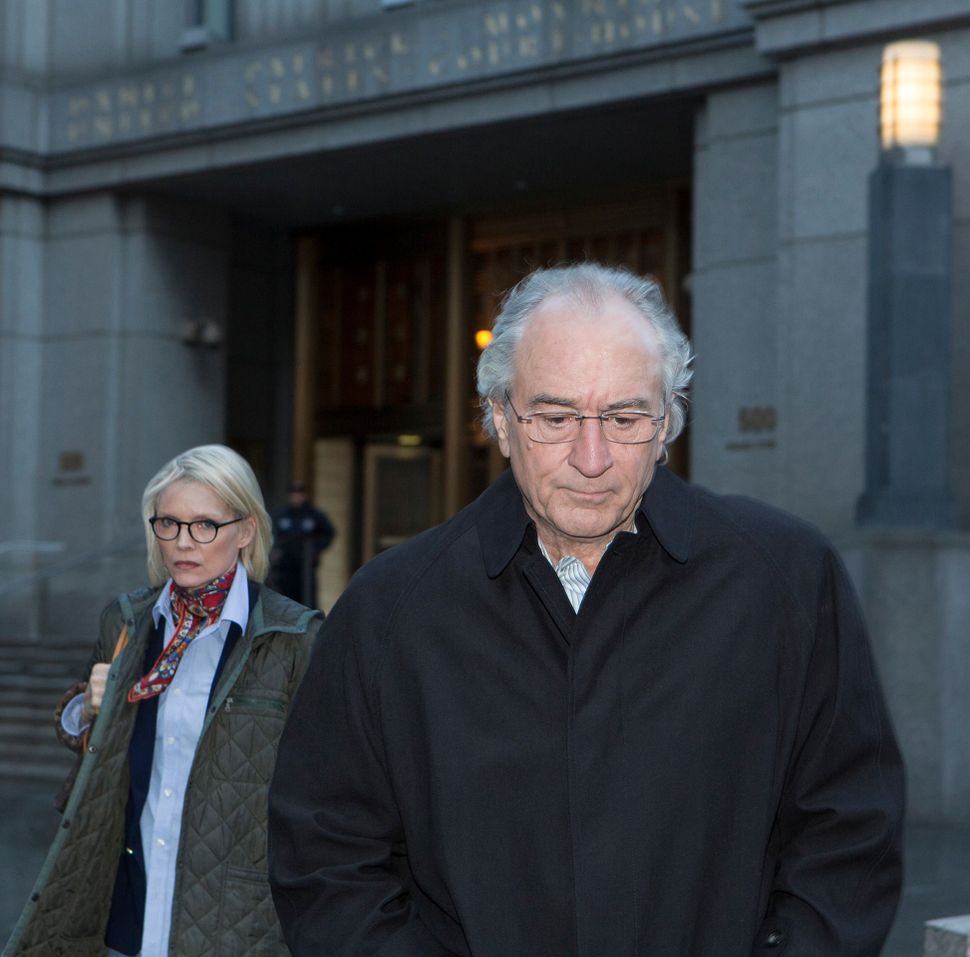 Robert DeNiro and Michelle Pfeiffer in “Wizard Of Lies.” Image by HBO

Nine years ago, Mom and Dad lost their whole life savings to Bernard Madoff’s Ponzi scheme. They never knew it, though. The good years of their lives were over before the bad year happened.

Dad was a retired gastroenterologist in the thick of his dementia when Madoff was arrested, so he never took in that their nearly one million dollar account had dropped in one night to just four dollars and sixty five cents. When once a week he kept asking in his elfin way, “How’s Bernie doing with our money these days?” Mom always answered, “Bernie’s a crook,” but her worries were like the mini-strokes that must already have afflicted her. In half a minute she’d say, “Breakfast time,” and unless it was lunchtime she would be right, and off she’d lead him through the halls of the nursing home, never stopping short to wonder how on earth they’d meet their bills.

It was my sister Syl and I who shouldered that burden, and when we told them that the Veterans Administration was granting Dad a pension they beamed with pride, as if the monthly hardship stipend, barely enough, had been awarded for his valor in service to the navy six decades earlier. 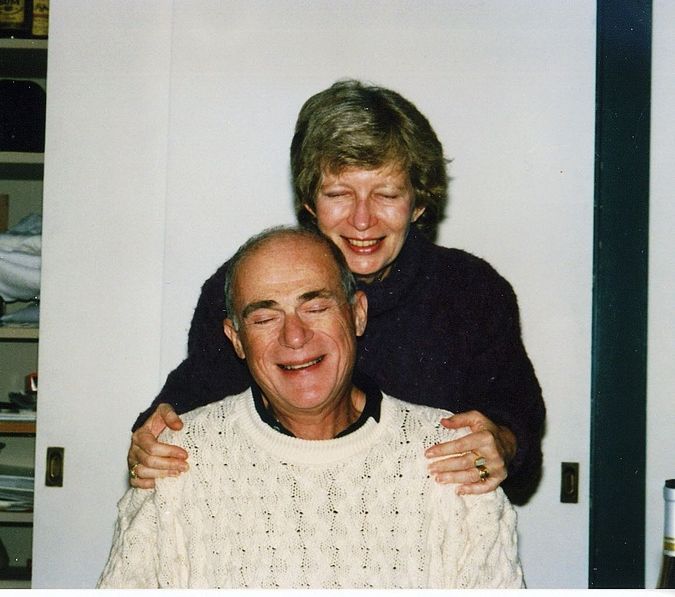 Howard and Carolyn Frucht Image by Courtesy of Abby Frucht

They’re both dead now, Mom and Dad. They never got a penny back, and though my sisters and I received no inheritance to pass along someday to our daughters and sons, we each kept a good handbag and some of Dad’s carvings. I got the hedgehog, the frog and the bull. The frog’s foot falls off every time I try to dust it, but Dad had fitted it with a peg so it could be easily popped back on, and today when I carry the bull to the table where it can sit at my side while I write these thoughts, I’m surprised to discover, as I am every time, it has a penis and balls. They make a delicate assemblage, more vivid than a Ken Doll’s but floral and not indecorous.

Dad carved the bull for Madoff, I believe. The bull didn’t show up in last year’s ABC miniseries, so when I turn on HBO’s “The Wizard of Lies,” it’s partly in hopes of catching sight of the heavy but graceful bronze casting on Madoff’s desk.

“That’s Dad’s Bull Market bull on TV,” I might say, phoning my sisters to be sure they see it, too.

But they wouldn’t be watching. “We lived it. Why would we want to watch it?” they’d ask.

What I liked most about ABC’s miniseries “Madoff” was how bad Madoff came off looking. The file in my closet containing Bernie’s fake accounting is labeled “Madoff’s Asshole,” but even so I’d never thought of the man as evil, only greedy white-collar. Richard Dreyfuss let me hate him. So when I give up looking for Dad’s carving this evening on HBO, I climb onto the treadmill and keep it to a walk so I can hear every word and gear up for more of that same dark thrill.

I don’t find it, though. They throw too crazy a party, Bernie and Ruth, disguised so convincingly as De Niro and Pfeiffer it might as well be the opposite way around. The wild dance floor especially perplexes me, since Mom and Dad never danced as far as I know, or if they did, they slow-danced and only in photos.

I used to chalk their reserve up to them being Jewish – Mom’s social formalities, the tiny cups of whiskey sours holding maybe four ounces Dad mixed at their sobering cocktail parties – although other than that, the sum total of their Jewishness was that we didn’t have a Christmas tree. The only Tannenbaum I knew was the misspelled Rabbi whose son was my first crush when I was eleven. Syl had broken up with him the night before.

I pick it up on the treadmill as if I’m jogging straight into the party tent, past the frothy bouquets amid stacks of bright lobsters toward the tables with guests who aren’t singing and dancing. The tent is in Montauk not far from the Huntington street I grew up on; it’s not impossible my parents attended that party. Now I find myself straining my eyes at the crowd, searching first for the extras who might be failing at playing them, but then for their actual flesh and blood faces.

There’s a man in a striped shirt who isn’t my dad, and a lady in a blouse that isn’t Mom’s blouse, but then there’s someone over there with his back to the camera and the frames of square glasses sticking out past his ears, like Dad’s ears, Dad’s glasses, the back of Dad’s neck and the fold of Dad’s collar.

So maybe it’s because I’m already crying that when Michelle Pfeiffer screams upon learning Ruth’s son died, it’s like I’m right there with them, offstage in the dark, sobbing away but feeling sorrier for Ruth than I ever once felt for my parents, my sisters, myself or my sons.

At the end I blot my eyes with a tank top sleeve, tangle myself up in a pesky loose bra strap and remember Mom’s rings, the ones Dad bought for her birthdays some years. Those rings are all lost, not by Madoff but in the mundane, oddly comforting way of stuff that goes AWOL in nursing homes. I don’t miss the lost jewelry, not even the topaz, and I don’t miss the money. Mom and Dad didn’t. Why should I?