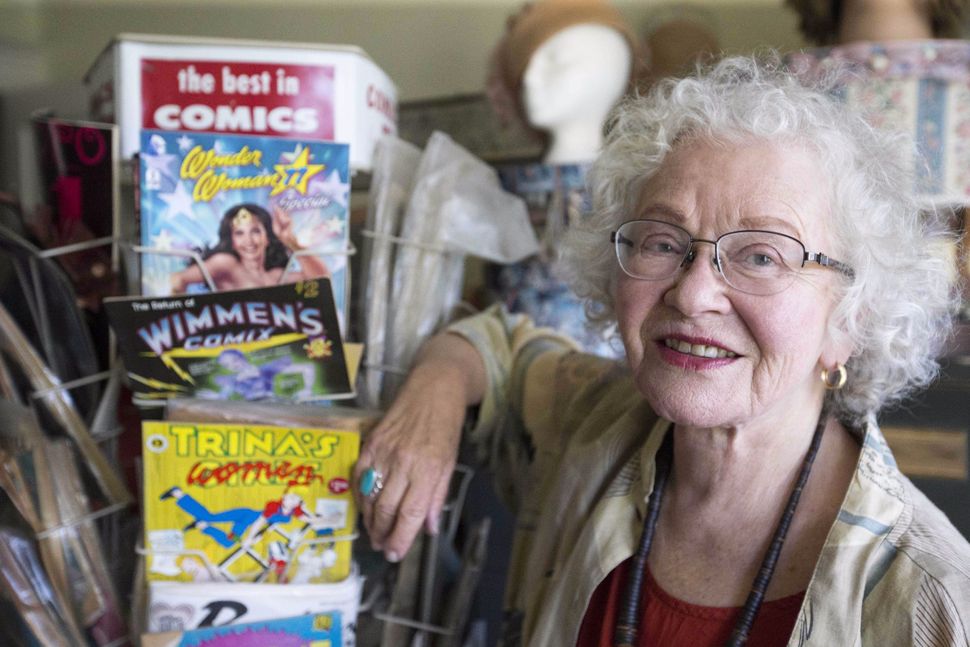 A pioneer in 1970s underground comics, Trina Robbins has become a revered writer and “herstorian.” But her own history, as the child of Yiddish-speaking immigrants, eluded her. “I divorced myself from Jewish part of my parents,” she tells the Forward. “I was unappreciative of it – a dreadful daughter.”

Her latest project changes that – by “reuniting” her with her late father. Max “Mutye” Perlson published a book of Yiddish stories about his childhood in Belarus and Brooklyn in the 1930s.

Robbins enlisted Yiddish translator Hershl Hartman for the text, and recruited 15 comics stars to illustrate. The result is “A Minyen Yidn (Un Andere Zakhn),” translated roughly as “A Bunch of Jews (and other stuff),” a beautifully drawn and elegantly translated window onto two lost Jewish worlds. Robbins spoke to the Forward’s Michael Kaminer.

You thought your father’s writings had been lost. How shocked were you when your daughter Casey unearthed them?

I wouldn’t say I was shocked, but I was pleasantly surprised. I had just decided it was one of the great lost books of the Yiddish language. What could be more obscure than a Yiddish book from 1938?

You’ve said that you didn’t appreciate his stories when you were young. What was your relationship like?

I was a dreadful daughter. I loved my parents, but I didn’t like the Yiddish part of them. We didn’t live in a Jewish neighborhood – we were in an Italian/Irish Catholic neighborhood, and we were sore thumbs. I wanted desperately to belong. I divorced myself from whole Jewish part of them. One of the things about this book is getting forgiveness from my father.

You tapped some amazing comics artists. Did you wonder if some of the non-Jewish artists would be able to capture the book’s mood?

This is probably like asking you to choose between your kids, but which are your favorite stories?

I do have two favorites – the first and last in the book. Steve Leialoha and Mirian Katin did such beautiful jobs drawing my father from photos. I just love what they did.

After rejecting Yiddish as a kid, are you embracing it now that you’ve reclaimed these stories?

Yes – I’m taking Yiddish classes. They’re for gay seniors. I’m the only straight woman there. But everyone there accepts me.